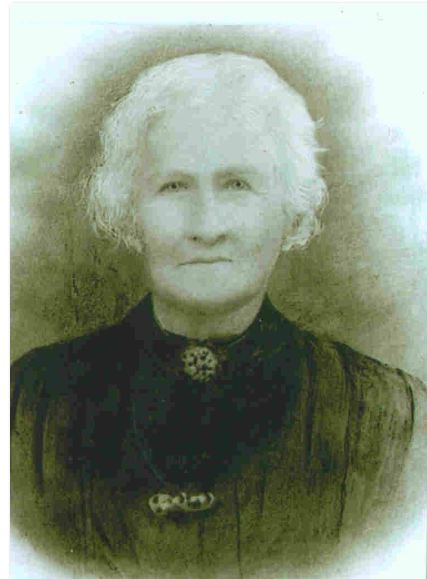 My great great grandmother, Ann Jane Knight, was born about 1832 in Gloucestershire, England.  Her father was John Knight.
I have no further details about her life there or her parents or any siblings apart from what is written in the following obituaries.
I'm at a bit of a loss as to how to find more information such as who her mother was, where in Gloucestershire they came from etc.
UPDATES in September and November 2016
My first foray into DNA for genealogy
Knight family Wiltshire to Australia 1842

Ann gave birth to thirteen children, four of whom didn't survive childhood. The photo below is Ann and William Fleming with five of their children. 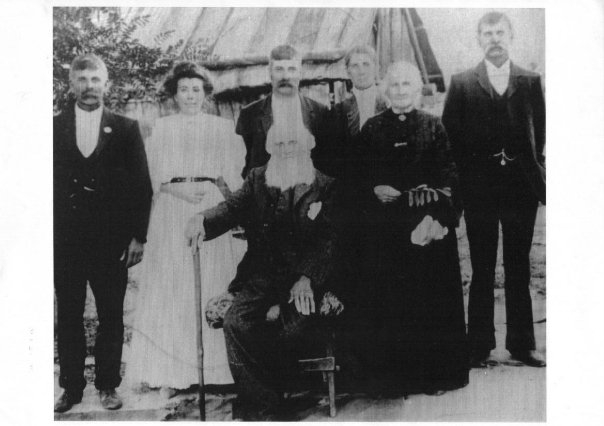 A very old colonist in the person of Mrs Ann Jane Fleming, relict of the late William Finlay Fleming, died at her daughter's residence, (Mrs M Worrall, Brunswick) on Wednesday, November 10th, 1920, and the remains were taken to Whitfield for interment on Thursday.  Deceased who was aged 88 years, sustained an injury to her leg in February and was confined to her bed since, during her illness she was nursed by her daughters whose kindness to her was a comfort and consolation in the autumn of her life.  Born Gloucestershire, England, the late Mrs Fleming came to Australia in 1847 with her parents, and two sisters, since deceased.  After her marriage to Mr. Fleming 68 years ago, she went to the Goulburn Valley where they carried on farming for many years.  About 21 years ago they went to reside at Edi and her Husband died 9 years ago.  She is survived by 3 sons: Donald (King Valley), Moses (Wyalong) and J.K. Fleming (Wangaratta) also 5 daughters: Mrs. J. Thompson (Wangaratta) A. Tuckett (Kensington) M. Worrall (Brunswick), S. Laurence (Whitfield), W. Jones (Northcote) numerous grandchildren.  The funeral arrangements in Melbourne were carried out by J Allison and in Wangaratta by Irvings Pty Ltd.  Rev J.T. Piercey conducted the burial service.

FLEMING [KNIGHT] Ann Jane (1832 - 10/11/1920)   [EDI]
Wangaratta Chronicle, Saturday November 13, 1920
DEATH OF EDI RESIDENT.- Mrs Ann Jane FLEMING, widow of the late Mr Wm Finlay FLEMING, of Edi, died on Wednesday morning at the home of her daughter at Brunswick with whom she had been living since February last. Some time ago Mrs FLEMING fell and injured the bone of one leg, and since then she had been unable to leave her bed. Death was due to affects arising from this injury and also to heart weakness. The late Mrs FLEMING was a native of Glochestershire, England, and was 88 years of age. With her parents she came to Australia in 1847, and after their marriage in Melbourne Mr and Mrs FLEMING went to the Goulburn Valley where they engaged in farming, and 12 years ago sold out to come to Edi to live. There Mr FLEMING died nine years ago. Mrs FLEMING was respected by all who knew her. In time of sickness or trouble amongst her neighbors she was always anxious to help them, and in this way she rendered very helpful services to many sufferers. She is survived by eight of her family of 13, namely, Mrs J THOMPSON, Wangaratta; Mrs A TUCKETT, Kensington; Mrs M WORRALL, Brunswick; Mrs S LAURENCE, Whitfield; Mr Wm Jones FLEMING, Northcote; Mr Donald FLEMING, King Valley; Mr Moses FLEMING, Wyalong, NSW; and Mr John K FLEMING, Wangaaratta. There are 77 grand-children, 45 great grand children, and one great-great grandchild. The remains were brought from Melbourne on Wednesday night, and the cortege left the residence of Mr J K FLEMING on Thursday morning for the Whitfield cemetery. The burial service was read by Mr PIERCEY. The funeral arrangements were conducted by Mr J ALSTON (Melbourne) and Mr G V STEELE, Wangaratta.