Morgan enlisted as a private to the 5th reinforcements, 7th Battalion on the 14th January 1915 and embarked on the HMAT Hororata on the 17th April 1915.  His service record number was 1903. 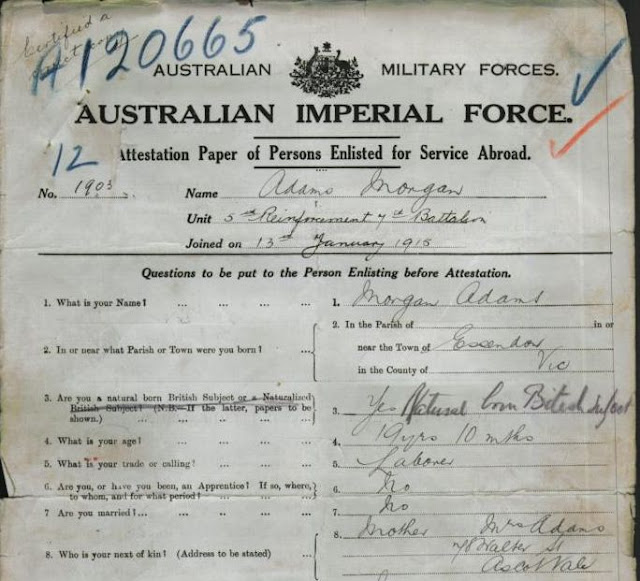 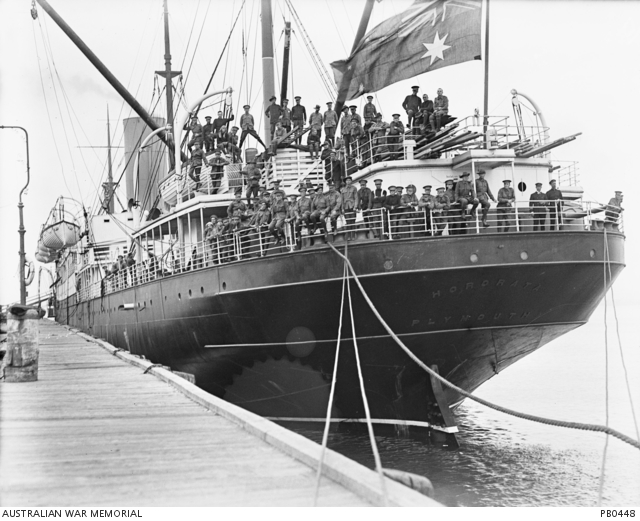 On the 13th July 1915 he arrived at Gallipoli where on the 8th or 9th of August 1915, he received a gunshot wound to the forehead at Lone Pine and on the 11th of August he was admitted to the 15th Stationary Hospital at Mudros.
Morgan was transferred to the convalescent camp at Mudros on the 21st of August.

He rejoined his battalion at Gallipoli on the 25th of August 1915.

From here on in his service records are fairly basic but I bet what he experienced wasn’t basic.

6-7-1919 Discharged from the A.I.F. at Melbourne, Termination of Period of Enlistment.


The family story was that Morgan died young due to being gassed in the war.
This must-have occurred somewhere in France as the Turks had no gas weaponry at Gallipoli.
There was no mention of it anywhere in his war service records.

This excerpt is from the 7th Battalion war diaries:

Dec 26, 1917, enemy shelled reserve coy - Denys Wood - during night with gas shells putting about 300 shells over, covering an area of about 500 sq yards
Nearly all men in Coy. suffering from the effects of the gas. Coy. relief, C Coy in frontline.
I don't know if Morgan was in that Company.

After his discharge from the army, Morgan married Isabelle O’Brien in 1920.
Isabelle was born in Beechworth in 1895 to parents Henry O’Brien and Caroline nee Methven.

In 1922, now a railway employee, Morgan and his wife Isabelle were living at 44 Erskine Street, North Melbourne.

On the 22nd of August 1923, Morgan Adams died at the Caulfield repatriation hospital.
Cause of death was Pyelonephritis - 3 years and Uraemia - 1 week.
One notable cause of this type of kidney disease is toxins.
These were most likely toxins from the gas he was subjected to in France.

He was buried at the Fawkner cemetery on the 23rd of August 1923.
Isabelle was buried there with him 55 years later on the 30th of November 1978.
She had married Henry Ernest Toll in 1926. Henry died in 1950 and is buried at Coburg cemetery. 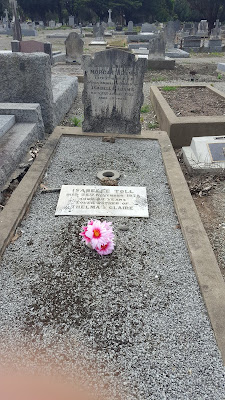 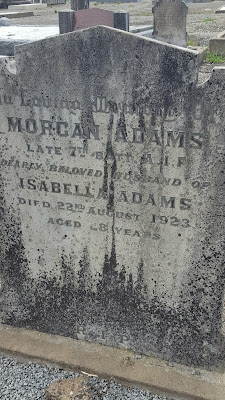 Tribute page for our Servicemen
By Kerryn Taylor - March 12, 2012