I am extremely thankful to my ancestors for all making the daunting journeys to Australia and New Zealand in the mid 1800s.

ADAMS - my great great grandfather George Adams arrived in Australia from Saffron Walden, Essex, England around 1852.
BARRY - his wife, Catherine Barry arrived in Fremantle, Australia in 1853 on board the ship "Travancore" She came from Limerick, Ireland, daughter of John Barry and Mary Boyle.

BEATON - Isabella Beaton from Edinburgh Scotland ( my ggg grandmother) arrived in Australia with her brother, William and his wife Mary, in 1840 on the ill fated ship "The India"
PIKE - Isabella Beaton married John Pike.  He arrived here in 1840 from Ireland on the ship "Coromandel"

FLEMING - Andrew Fleming and his wife Ellen/Helen nee Findlay arrived in Australia in 1848 on the ship "William Stewart".  They came from Penninghame, Wigtonshire, Scotland with their six children to start a new life here.  Their eldest son William Findlay Fleming was my gg grandfather.

MORGAN & BLOUNT -  My ggg grandparents, John Morgan and his wife Sarah nee Blount sailed on the ship "Lady Fitzherbert" from England in 1842.

MORGAN -  I had another gg grandfather whose name was also John Morgan.  He came from West Armagh, Ireland in 1855 on the ship "Calliance"
KELLY - In 1858 he married Margaret Alice Kelly who came from Dualla, Tipperary Ireland some time around 1852.

HULME & LAND -  William Cluff Hulme and his wife Hephzibah nee Land were my ggg grandparents.  They came out on the ship "Blue Jacket" in 1862 from Surrey, England.

BARTSH & NEBEL - Johann Heindrich Bartsh and Anna Dorothea Nebel arrived from Prussia on board the ship "Acmel" in January 1855.

MASON & CARSTAIRS - GGG grandparents Peter Webster Mason and his wife Margaret Leslie Carstairs arrived in Australia in 1848 on the ship "Cheapside".  They were from Largo, Fife, Scotland.

FORSYTH, FARQUHAR,  MUSSON & BIRD - My grandfather, James Forsyth (born James Musson) was the latest arrival to Australia in the early 1930s.  His grandparents all migrated to New Zealand from the UK.
William Musson in 1861 from Leicestershire, UK on the ship "Royal Stuart"
Catherine Bird in 1863 from Lincolnshire, UK on the "Lancashire Witch"
Robert Forsyth and Jessie Farquhar in 1874 from Aberdeenshire, Scotland on the ship "Crusader" 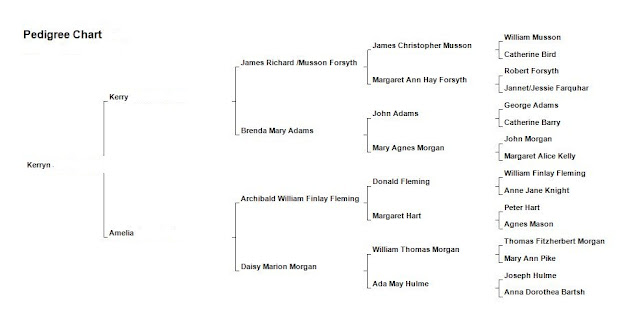