George Kellam Bird was my great-great-grand Uncle - the brother of my great-great grandmother Catherine Bird.
Like his father before him, George Bird was a wheelwright.  Actually George was a Master Wheelwright.
He was born in 1820 at Foston, Lincolnshire, England, the eldest son of Mark and Mary Bird nee Kellam.  Mark and Mary died young, both in 1834 aged  about 45 and 38 years respectively.
Their seventh and youngest child, Mark, was only 2 years old.
George would have been about 14 so probably already out earning a living.

His maternal grandfather, George Kellam was also a Master Wheelwright.
This could be how George's parents met.

He moved to Corby Glen in Lincolnshire and lived there for many years until his death in 1885.
In 1847 George had married Ann Loughter.  They had one son in 1849, also named George and this George Bird junior also became a wheelwright.

The cast iron grave marker for George's grave at St. John the Evangelist churchyard at Corby Glen is rather impressively painted black with gold lettering.

My cousin Cathy is currently about to visit Lincolnshire where our Bird family originated. 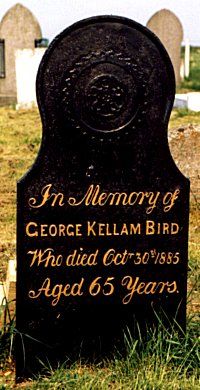 This photo is from the website   http://www.churchmousewebsite.co.uk/Cast_Iron.htm#corby
but I don't know how long ago it was taken.  Perhaps Cathy will visit the resting place of our relative, George Kellam Bird.