George Forsyth enlisted in the 47th Infantry Battalion of the Australian Imperial Forces on the 24th of January 1916.  His rank was Private and his service number was 1654.
On his attestation paper George stated he was born in the Parish of Pitsligo near Fraserburgh, Scotland.
He was 25 years and 3 month of age, single and gave his occupation as labourer. 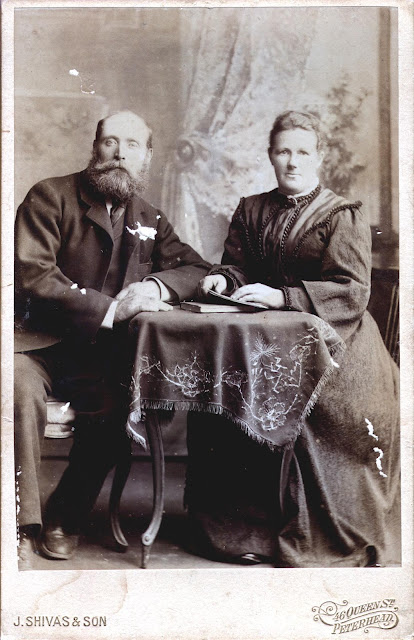 Thanks to Sandra Playle on the Australian genealogy facebook page I just now got this further information.
George enlisted at Charter's Towers in Queenlsand. His mother states on the Honour Roll form that he was 18 years of age when he came to Australia.
George was living in Friezland, via Cloncurry. (more research for me, thanks Sandra :)

His younger brother, Robert, had also enlisted but he was with the Gordon Highlanders in Scotland.
One question George was asked on his enlistment in Australia was "had he ever been rejected as unfit for His Majesty's Service and if so for what reason?"
His reply .... Yes, defective teeth.

The attesting officer who signed his enlistment form was Fred Johnson. 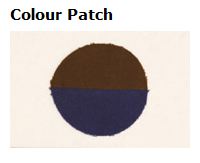 The 47th Battalion was raised in Egypt on the 24th of February 1916.  About half its new recruits were Gallipoli veterans and the rest were fresh reinforcements from Australia, the majority being recruits from Queensland and Tasmania.
Arriving in France on 9 June 1916, the 47th entered the trenches of the Western Front for the first time on 3 July. It participated in its first major battle at Pozières. Initially, the battalion provided working parties during the 2nd Division’s attack on 4 August, and then, with its own division, defended the ground that had been captured. The 47th endured two stints in the heavily-contested trenches of Pozières

Transcript of Battalion war diary:
5 - 8 - 1916    Battalion moved from Tara Hill and took up position near Pozières as reserves to front line.

7 - 8 - 1916     at 6.30 am received message to reinforce front line occupied by 48th Battn.  despatched C Coy at 6.40am. Three platoons returned at 7.15 am and the other remaining.
At 2.30 pm commenced relief of front line occupied by 48th Battn. Relief was completed by 4.30 pm.  A  and D companies occupying front line.  O, G, I and B Coy in close supports in Tramway Trench.
One platton of C Coy which reinforced the 48th Battalion at 6.40 am was sent back to join up with remainder of C Coy at Sunken Road.  C Coy remained in support.
The relief of the 48th Battalion was carried out under a heavy bombardment by the enemy and considerable casualties were inflicted on the Battalion.

On the 9th of August 1916 Private George Forsyth was killed in action at Pozières, although his sister, Jean Butcher of Taupo, New Zealand had received notification of his death on dates in both August and November 1916.  She wrote to the war minister In Nov 1917. 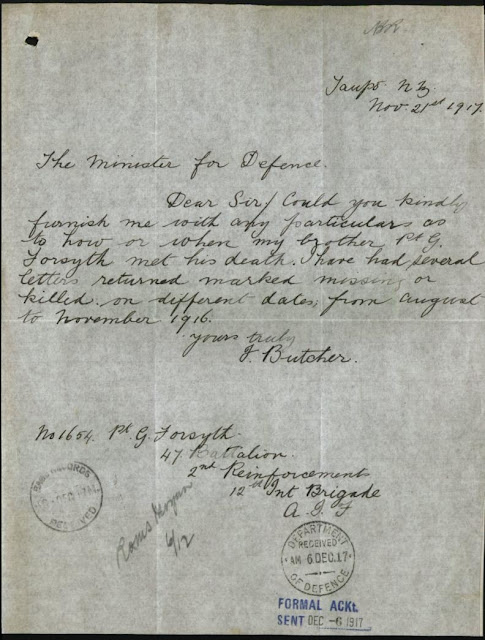 She received a reply in December. 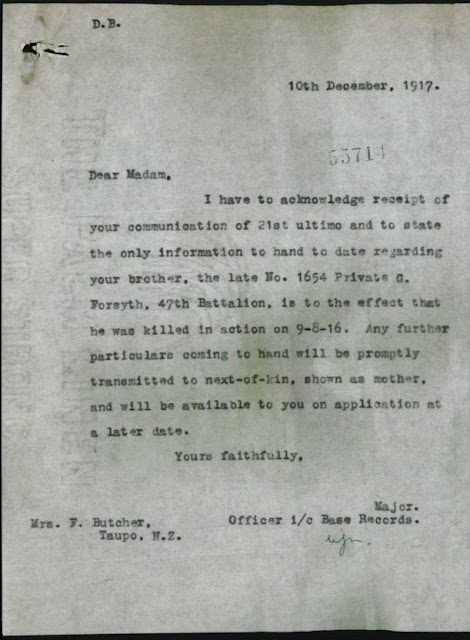 On his war service record it states that he is buried "500 yards N.E. of Pozières".
Underneath are location co ordinates 57D SE X5A R35C Martinpuich.

I am told the coordinates may be taken so they can go back and retrieve the body for burial.
Sometimes the bodies cannot be found and that is when the soldier's name and details are put on the memorials.  I've yet to work out if George's body was found for burial.

Martinpuich village is about a mile north-west of High Wood,and like the wood was captured on September the 15th, 1916.
It is ironic that troops of the 15th (Scottish) Division took the village.

Military historian Matt Smith of  http://www.australianwargraves.org    says "Martinpuich is the village NE of Pozieres. The name refers to the trench map, not where he was buried. George would have been killed and buried on the old German Line OG1 and OG2, probably attacking the Windmill site. It is the site of the current 2nd Australian Division memorial." 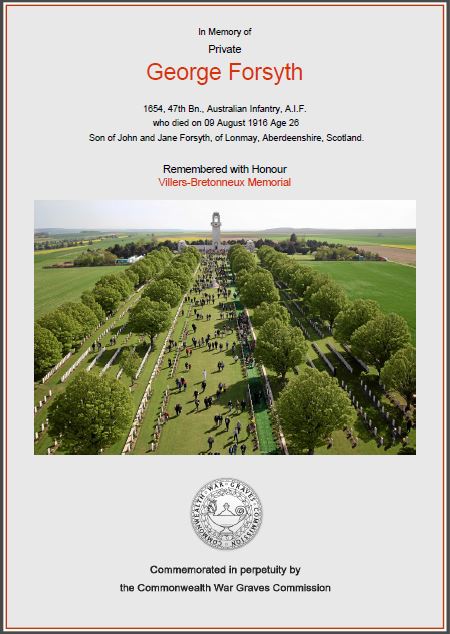 George's name is included on the Villers-Bretonneux memorial at Somme, France. 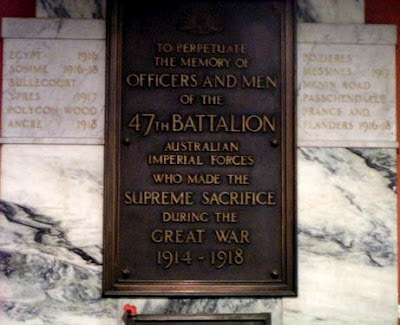 Both George and his brother Robert are also commemorated on the War Memorial at Rathen, Aberdeenshire, Scotland. 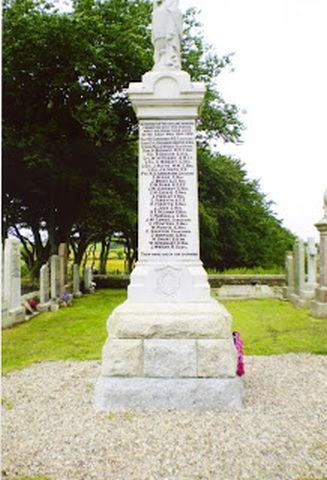