The surname Morgan features prominently in my family history. 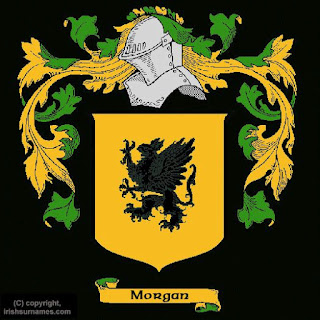 Some Morgan crests show the Griffin while others have the Lion.

There is much information on the name but it is beyond me to sort out what would be correct if any.

Morgan is quite a common Welsh surname and it may be that the name originated in Wales and later Morgans spread out to Ireland, Scotland and England.

On my maternal side my 3rd great grandfather, John Morgan, was born about 1806 at Grosmont or Grysmwnt, Monmouthshire.  He came to Australia in 1842.

On my Paternal side my 2nd great grandfather, John Morgan was born in 1829 at Derrynoose, West Armagh, Ireland.  He came to Australia in 1855.

The surname Morgan is Celtic in origin and pre-dates Christianity and may have originally been "Morcant" possibly meaning "sea defender" or "sea chief".

In Wales the first recording may be Thomas Morgaine, Knight of Monmouth, in 1538

In Ireland the name is popular in Leinster and Ulster, and in some cases is an Anglicization of Merrigan and Morahan, the first recording being that of Edward Morgane, of Dublin, on April 26th 1654. Not only does the name indicate a sea warrior, it is with the sea that the Morgan name has won most renown.

There are some varying opinions.