Leslie John FLEMING enlisted as a Private 125, in the 8th Battalion A.I.F A Company on the 24th of August 1914 at the age of 22 years and 1 month.
He listed his Uncle, John Knight FLEMING of Edi, near Wangaratta, as his next of kin.
Leslie's first cousin, William Finlay FLEMING, 1561 (son of Finlay FLEMING) had enlisted in the 8th Light Horse regiment on the 4th of August 1914.

Below is a photo of Private Leslie FLEMING.
He is wearing a Light Horse regiment uniform as uniforms were scarce at the beginning of the war.

According to the Battalion diary after training at the Broadmeadows camp, the 8th Battalion embarked on the 19th of October on the Transport "Benalla". 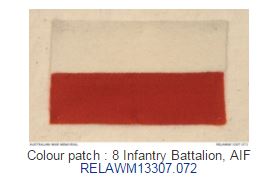 After a brief stop in Albany, Western Australia, the battalion proceeded to Egypt, arriving on 2 December.
On the 5th of April 1915, they embarked for Gallipoli on the troopship Clan McGillivray.
The battalion later took part in the ANZAC landing on 25 April 1915, as part of the second wave.
On the 29th of April Leslie suffered a sprained back and was admitted to the 17th General hospital at Alexandria.
On the 7th of May, he was moved to the convalescent camp at Mustapha and was discharged to duty on the 19th.

On the 6th of August Leslie was wounded, most likely at the renowned battle of Lone Pine.  He suffered from concussion and in September was admitted to hospital at Mudros where he later developed rheumatism.

Leslie was transferred to the hospital in Weymouth, England but it seems his health did not improve.
In June 1916 his next of kin were informed he was returning to Australia.

Still suffering rheumatism and also shell shock he was repatriated to Australia from Portland in May 1916 on the Themistocles.
Leslie was discharged from the A.I.F on the 11th of September 1916.

In 1920 Leslie married Annie Kathleen REDMAYNE at North Melbourne.
They had four children and lived the rest of their lives at 17 Deakin Street Coburg.
Leslie died on the 27th of July 1974 at the good age of 83 years.


Tribute page for our Servicemen