On his enlistment into the A.I.F on the 4th of August 1915, at Seymour, William Finlay FLEMING was aged 22 years and 1 month. 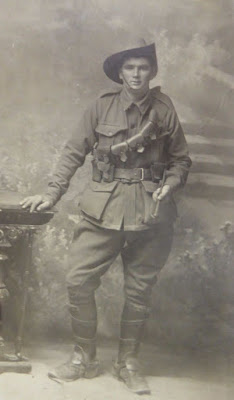 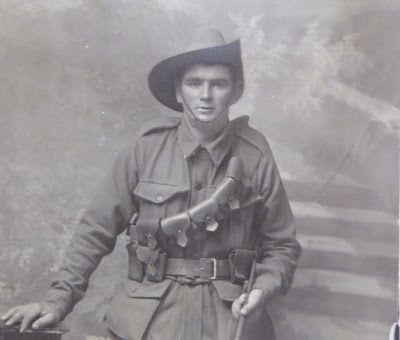 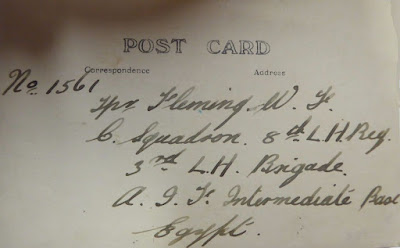 *above photos used with permission from the owner at that time. 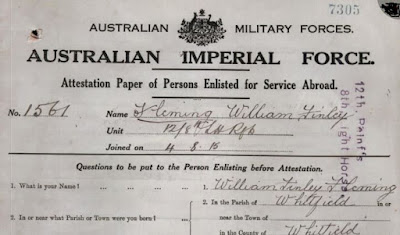 He was 5 foot 5 and a half inches tall and weighed 150 lbs.
His complexion was ruddy and eyes and hair brown.
William's surname was spelt FLEMMING in some records.

Like his younger brother David Claude FLEMING, his religious denomination was Presbyterian.
William was the eldest son of Finlay FLEMING and Jessie nee SPLATT of King Valley.
Only 4 years before his enlistment he narrowly escaped severe injury in an accident that was reported in the local newspaper.

The North Eastern Despatch.
Wednesday, March 22, 1911 - page 2
~~~~~~~~~~~~~~~~~~~~~~~~~~~~~~~~~~~~~~~~~~~~~~~~~~~~~~
A narrow escape - Wm Fleming aged 20, a son of Mrs. Finlay Fleming, King Valley, had a remarkably narrow escape from serious accident on Monday.  He was driving a draught horse attached by chains to a log, 8 feet long by about 2 feet in diameter, when the animal became fractious, and in an endeavour to regain control, Mr. Fleming fell.  The horse trod on his chest, but fortunately did not rest it's full weight on him.  As the animal moved away, the leg grazed the side of Mr. Fleming's body, making numerous bruises.  There was a good deal of internal bleeding and the sufferer was brought into D. Henderson, who found that his injuries were fortunately not serious.

William's unit the 8th Light Horse Regiment, 12th Reinforcement embarked from Melbourne, Victoria, on board HMAT A11 Ascanius on 10 November 1915.

In December 1915 William reported for duty at Heliopolis. In February 1916 they marched out to Serapeum and some other places they were recorded at were Port Said, Abasan, Tripoli and later Moascar which was a hospital camp.

I can't find any mention of why he was there.

At one stage at Port Said William was reported for being "Out of Bounds" and deprived of 28 days pay.

In August 1917 he trained as a Gunner and passed in the Hotchkiss gun course.

William returned to Australia per PT Sydney on the 5th of March 1919 and was discharged on the 21st of March 1919.