George William HULME, eldest son of John William HULME and Alice Morgan REID, was born on the 10th of August 1884 at Edi near Wangaratta in North East Victoria.

George enlisted at Sydney in the No 1 Field Company engineers on the 19th of August 1914.  He had been apprenticed at a power house in Hawkesbury, New South Wales and later trained and employed in mechanical and electrical engineering at one of the New South Wales Government workshops.

On the 3rd of March 1915, his unit embarked to Alexandria.  After 3 months service at Gallipoli George was admitted to hospital with Influenza.  He soon became jaundiced and was transferred via the hospital ship Neuralia to Malta in August and by early September he was in hospital in London.  The Neuralia had also taken on board soldiers who were rescued from the troopship Southland on the 2nd of September.


George had served in the A.I.F for one year and 84 days landing at Gallipoli on the 25th of April 1915,  His time at the Dardanelles was spent making bombs.
Due to an ongoing foot problem and after much corresponding back and forth with the Australian military office, George was officially discharged as unfit in January 1916.

Rather than return to Australia where he felt employment opportunities would be in short supply George had applied to do Home Service in England.  He was given a position doing munitions work at the Royal Dockyard at Woolwich.


It seems George was having difficulty in later being repatriated to Australia.
In 1919 he sent a letter to Andrew Fisher, the High Commissioner at Australia House requesting his help. 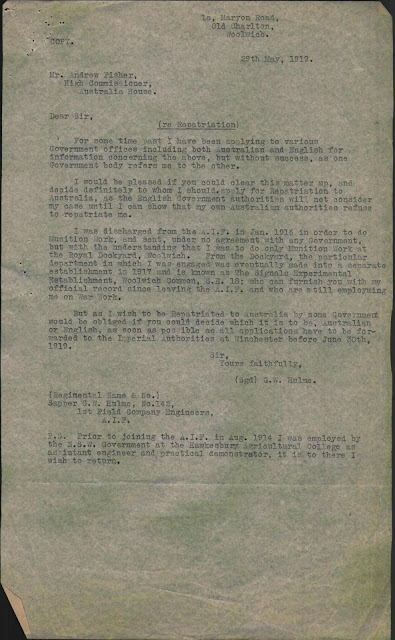 By 1922 George had returned to Australia and that year he married Clarice Jane BENNETT (known as Cassie).  There is no mention in his records about how he got back to Australia, whether he returned under his own steam or the A.I.F repatriated him.

I have found no record of children for George and Cassie and as it appears no-one else has either (a search of ancestry trees) I will assume the couple remained childless.

In the 1949 electoral roll George and Cassie were living at the Hawkesbury Agricultural College where he was employed as an engineer.

In 1967 George wrote a letter to the Army Records Section in Melbourne applying for his Anzac commemoration medallion and badges. 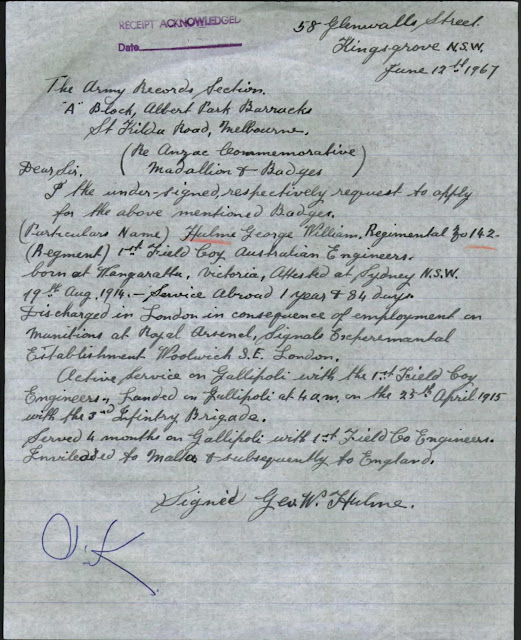 George passed away at the good age of 93 years on the 9th of November 1977 at Tamworth, New South Wales.
Cassie had predeceased him in 1971

Tribute page for our Servicemen
By Kerryn Taylor - June 14, 2016