The KING (AH KING) family are a challenge to research, even more so in recording the war service of the three youngest boys of Thomas AH KING and his wife; my great great grand aunt, Euphemia nee MASON.
Thomas AH KING who was born about 1843 in China had died in 1900 when Ernest was aged thirteen, Edmund eleven and David only five.  All eleven of the children's births were registered with Thomas KING/AH KING as father.

I have previously written about the war service of the two youngest, Edward (Edmund) James  and David Alexander.
None of the boys listed their mother as next of kin on their attestation papers.

When their mother married Richard POPE (pretty quick) in 1900  it is said he didn't want a chinese child in the house so their youngest sister, three year old Rachael, was "put on the State" (made a ward of the state).
She never got to know her family....... another story to come.

Richard POPE died in 1915 and Euphemia married Frederick ELLIS in 1920.

I haven't yet found where the boys were living at the time but it seems likely they were with their eldest sister Margaret who had married William CLOVER in 1894.  Margaret died in 1914.

When researching Edmund and David I didn't know that Ernest had also enlisted in the First A.I.F. until I found their mother's death notice in the newspaper archives at Trove .

In the war service records there was only one Ernest KING born at Birchip.  He enlisted into the 14th Battalion on the 4th of November 1916.  He was later in the 29th Battalion.
His address was given as Holbrook, New South Wales, next of kin was first listed as a friend, Henry COLLYER also of Holbrook.  Later the next of kin was changed to cousin, Miss F HOWARD of Upper Edmonton, London.

It looks as though Ernest may have cut all ties with his mother and siblings.
He declared "I Ernest John KING have no occasion to make a will" and to me it looks like the words "Parents forgotten" crossed out. 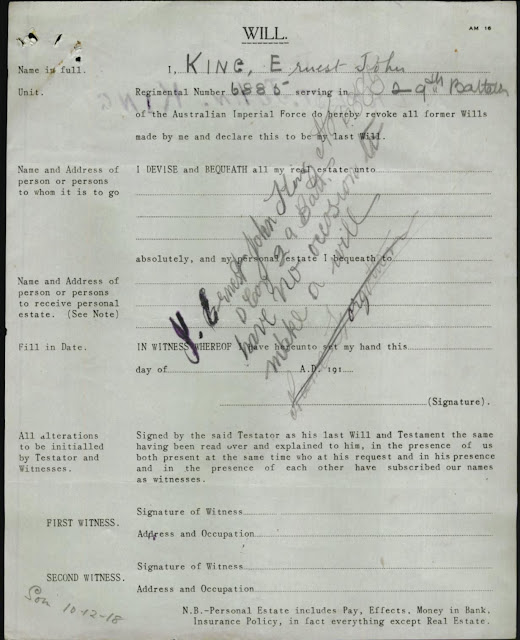 On the 17th of November 1916 Ernest embarked from Sydney on the SS Port Napier.  By March 1917 he was in France.  In October that year he sustained severe gunshot wounds to the thigh and face and in November was sent to hospital in England where he spent some months recuperating.

April 1918 saw Ernest at the No 1 Command depot at Sutton Veny.
On the 10th of December 1918 after some further medical issues Ernest returned to Australia on the "Somali" and was discharged from the A.I.F in March 1919.

On looking for further records of Ernest I came across a Will in New South Wales which named his wife as Lydia Violet Thorburn. His occupation was farmer and grazier.
Ernest died on the 8th of January 1940.
Ernest and Lydia had married at Wagga Wagga, New South Wales in 1919.  They had 5 children.
In the electoral rolls Ernest's address after the war was Coppabella near Holbrook, New South Wales.

Interestingly Lydia had been married previously but her first husband turned out to be a bigamist.
From the 1919 New South Wales police gazettes I learned that a warrant was issued in Albury for the arrest of Private William LANE reg # 6887 of the same battalion as Ernest.  William was on active service abroad and was also from Holbrook.
He was being charged with bigamy as when he married Lydia at Holbrook in 1916 he had already been married in England, and was still, to an Ann GRIFFITHS of High Ercall in Shropshire.