David Claude Fleming was born on the 8th of January 1897 at Kotupna (parish of Barwo) near Nathalia in Northern Victoria.
His parents were Finlay FLEMING and Jessie nee SPLATT. 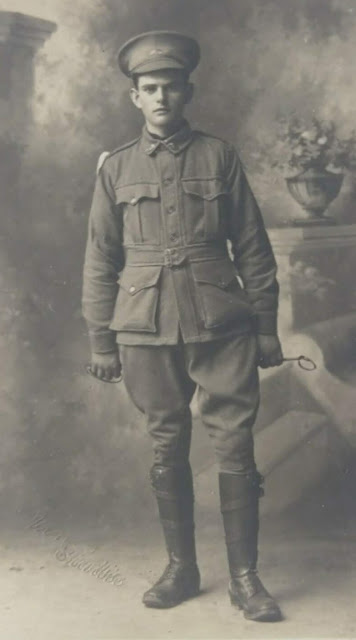 Finlay and Jessie had nine children who all lived to adulthood, many to a ripe old age but sadly that was not the case for Finlay.
The family moved to the King Valley in North East Victoria in the early 1900s where they took up farming.
Finlay died there aged only 46 years,  the eldest of their nine children being only 16 years old.

David Claude (known as Claude) was the third eldest child and second son.  He and his older brother William Finlay were the only boys and both served in WW1.

Claude was 19 years and 8 months of age when he enlisted at Shepparton.  He was 5 foot 5 and a half inches tall, weighed 124 lbs and had grey eyes, brown hair and a medium complexion.
His religious denomination was Presbyterian and his occupation was a railway porter. 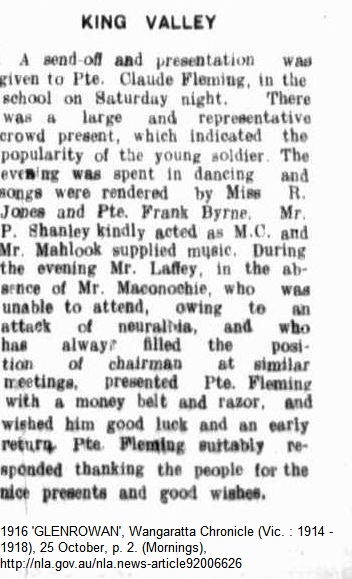 On the 28th of August 1916 David was appointed as a Private to the Divisional Signal Company 2, Reinforcement 17 He attended the Seymour signal school and later became a Sapper.

His battalion embarked on the "HMAT Ulysses A38" at Melbourne on the 25th of October 1916 and disembarked at Plymouth on the 28th of December that year.

On the 18th of February 1917, they marched out to Shefford and he was granted 5 days leave from the 19th to 23rd of February.

I can't find much on his active service and a lot of the record is very difficult to read.

In early September 1917 and August 1918, Claude was reprimanded and fined for neglecting to obey orders.


On his return trip to Australia in June 1919 on H. T Ormonde, Claude was admitted to the hospital for a day.

I am told that David "Claude" Fleming later married Agnes Frew Johnston and in the 1930s they were living at Essendon.