He was the tenth child and sixth son of Euphemia Margaret MASON (1859-1942) and Thomas AHKING.  Thomas was born in Canton, China in 1843.  He died at Maryborough in 1900. Euphemia is recorded as marrying Richard POPE in 1900. At the time of her mother's remarriage, the youngest child Rachel AHKING was a ward of the state.  It is said that Richard Pope didn't want a Chinese child in his house.

The older surviving children may have already left home and sadly David and his brother Edmund James were both killed in the war.

On his attestation paper of December 4, 1914, David named his older brother Arthur as next of kin.
Arthur's address was recorded as Kellerberin, Doodlakine, Western Australia.
David enlisted at Culcairn, New South Wales on the 28th of November 1914 and was recorded as 22 years old, 5 foot 11 inches tall in one record and 5 foot 9 inches in another.  He weighed 160 lbs with a fair complexion, grey eyes, and light brown hair.

Witnesses state that about 8 am on the 19th of April 1917 during the second Gaza Stunt (2nd Battle of Gaza) David King suffered dangerous gunshot wounds to the chest while at the front of enemy lines.  "He was well liked by all, jolly and cheery always".

Several letters in 1920 and 1921 record the War office searching for Arthur King's address regarding who is next of kin of David. Correspondence had been sent to the recorded address of Arthur being c/o Hedge's Store, Koolberrin, via Bruce Rock, W.A. 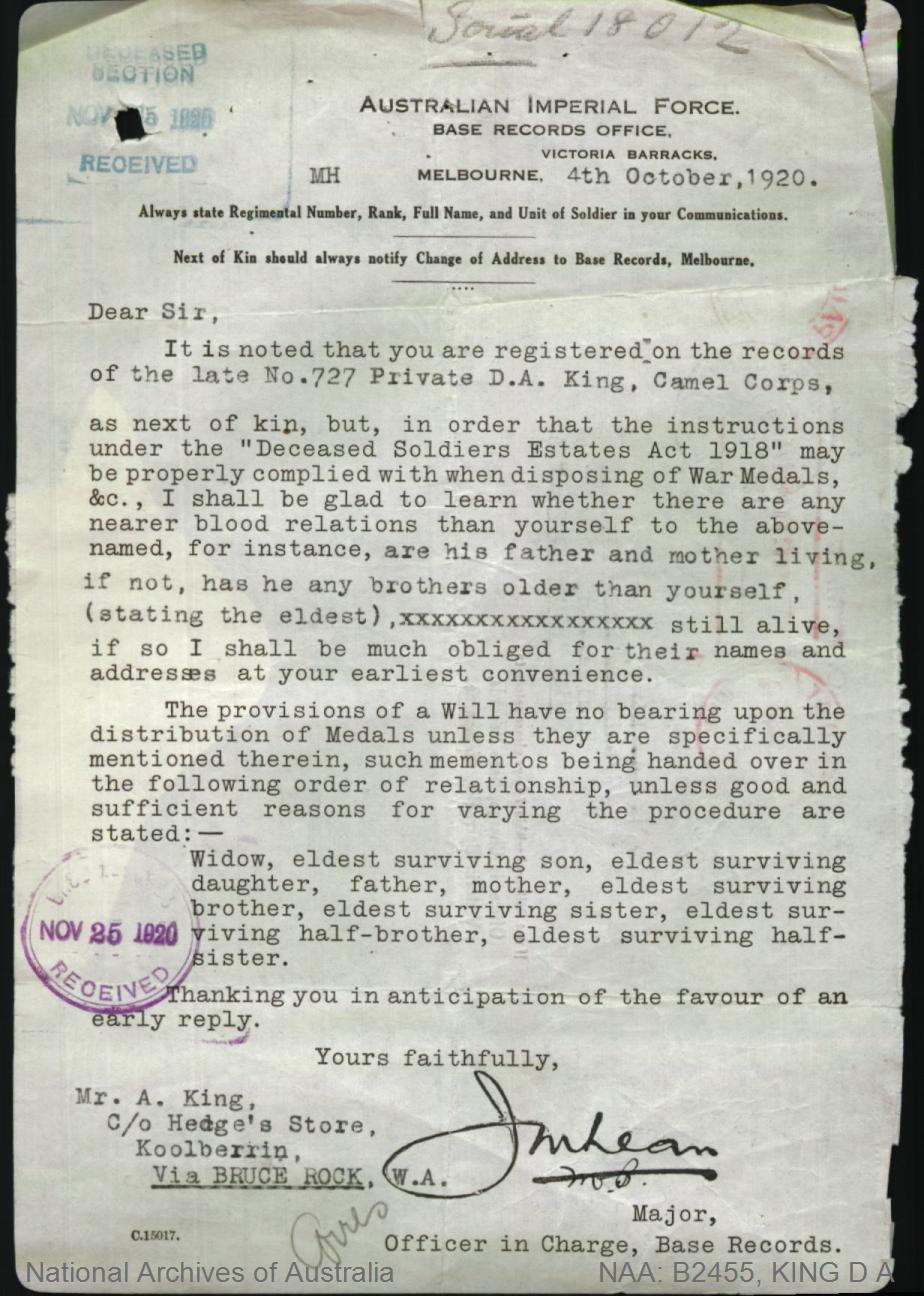 The Bruce Rock postmaster informed that his address was unknown, believed to have returned to Victoria.
The manager of Hedge's Store later informed Base Records that Arthur King's address was now Birchip, Victoria.
Nearest next of kin was to be established for the disbursement of David's medals.

Eventually, David's mother, Mrs. E Pope of Stawell made contact with the War Office and was granted his war gratuity and medals.

Tribute page for our Servicemen
By Kerryn Taylor - June 20, 2016