Robert Forsyth was born on the 3rd of February 1895 at Aberdour, Aberdeenshire, Scotland to John Gill Forsyth and Jane nee Birnie.
He was the younger brother of  George Forsyth who also died in WW1.

Robert was killed in action on the 20th of November, 1914 at Flanders, most probably the infamous first battle of Ypres where the British were outnumbered by seven to one.

I don't know if his war service records exist as in 1940 there was a World War Two bombing raid on the War Office in London where the records were held. During this raid, a large portion (approximately 60 per cent) of the 6.5 million records was destroyed by fire. The surviving service records have become known as the ‘Burnt Documents’.

On the 4th August when the Germans struck through Belgium the shock had to be met at the fields of Flanders and France and within a few days the `contemptible little army` as the Kaiser called it had been thrown across the channel and by the 22nd of the month had reached Mons. The 1st Battalion as part of the 8th Brigade in the 3rd Division helped to line the Conde-Mons canal near Nimy Bridge and it was here on the morning of the following day that the brunt of the German onslaught fell and two days later, after the longest march of the retreat, they made their famous stand at Le Cateau. At last after 8 days of retreat and with only one company left they reached a line behind the river Marne and it was from here that General Joffre struck at the German flank and turned the tide of invasion away from Paris.  http://www.thegordonhighlanders.co.uk/History.htm

By late November 1914 the old British army had virtually disappeared.

Both Robert and George are commemorated on the War Memorial at Rathen. 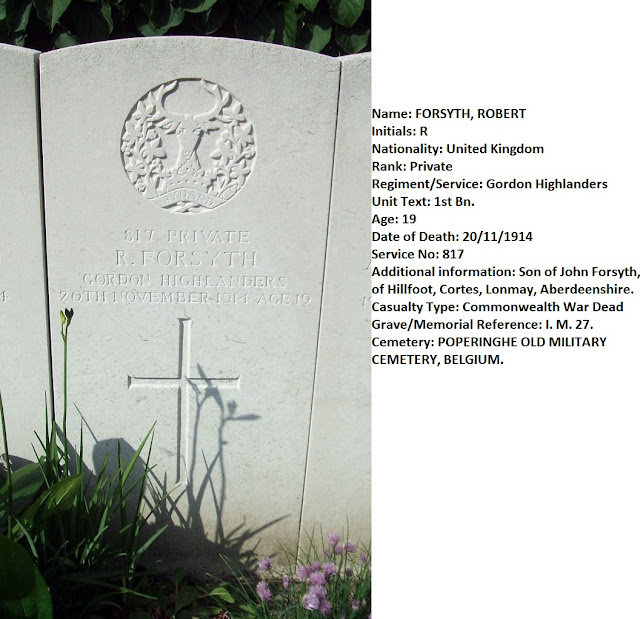 Tribute page for our Servicemen
Posted by Kerryn Taylor at 6:00 pm