My large brick building for this Sepia Saturday post (On Wedndesday!) isn't a bingo hall or a picture palace but a school hall. 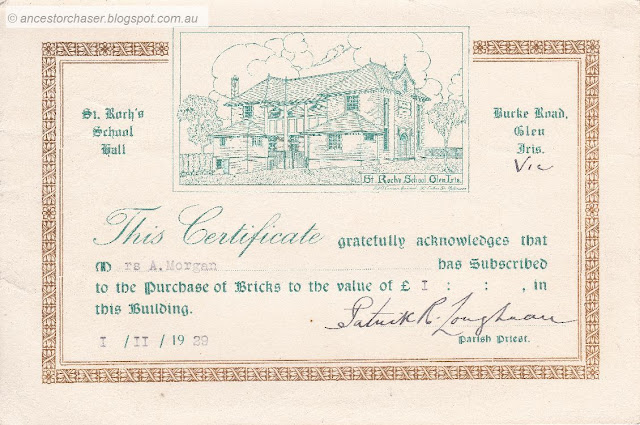 Letters, photos, and documents I received from a third cousin in New Zealand included this certificate acknowledging a donation of one pound for the purchase of bricks for the new St Roch's school hall at Glen Iris, a suburb of Melbourne.

The letters were to Mrs. Lavinia MORGAN wife of Alexander MORGAN, my great grand uncle, who died in 1929.  One of their daughters, Mary Agnes MORGAN (1898-1987) was a Catholic Nun who "made her profession" at Melbourne about 1928.
Perhaps this donation was in his memory.

After reading through other letters to New Zealand from Nora and  May Ursula Tobin who were maternal aunts of the Parish Priest, Patrick LOUGHNAN it appears the family may have become friends through Mary Agnes MORGAN.