I have a picture postcard of the Dhurringile mansion from my grandmother's photo album.

My maternal grandparents Archie and Daisy FLEMING lived there for a couple of years.
My grandfather was employed to teach the boys farming. 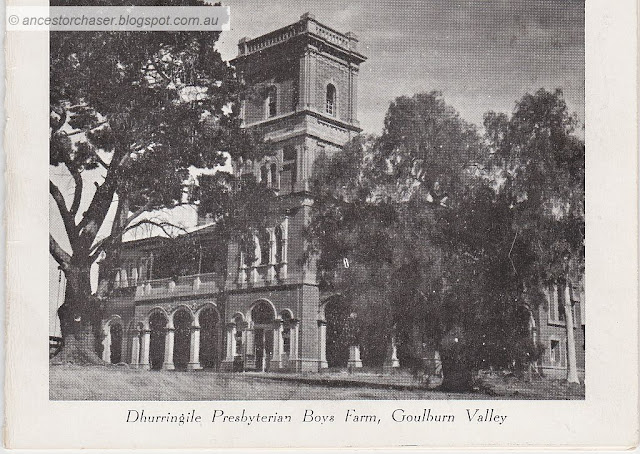 You can read more about the mansion HERE

An excerpt:
"In 1947, Dhurringile was purchased by the Presbyterian Church for use as a home for immigrants boys from the United Kingdom whose fathers had died during the war. The intention was to train the boys in farming methods to prepare them for employment. By this time the homestead was in a deteriorating condition and substantial repairs and alterations were needed. The Dhurringile Rural Training Farm did not open until 13 June 1951. Life in the home was spartan, difficulties were encountered in recruiting boys from Scotland and the scheme had limited success. The Commonwealth Government continued to provide increasing financial support to the home in accordance with an immigration policy to promote British migration, but difficulties persisted and a decision was made in 1964 to close the Dhurringile Rural Training Farm."