When I was Young 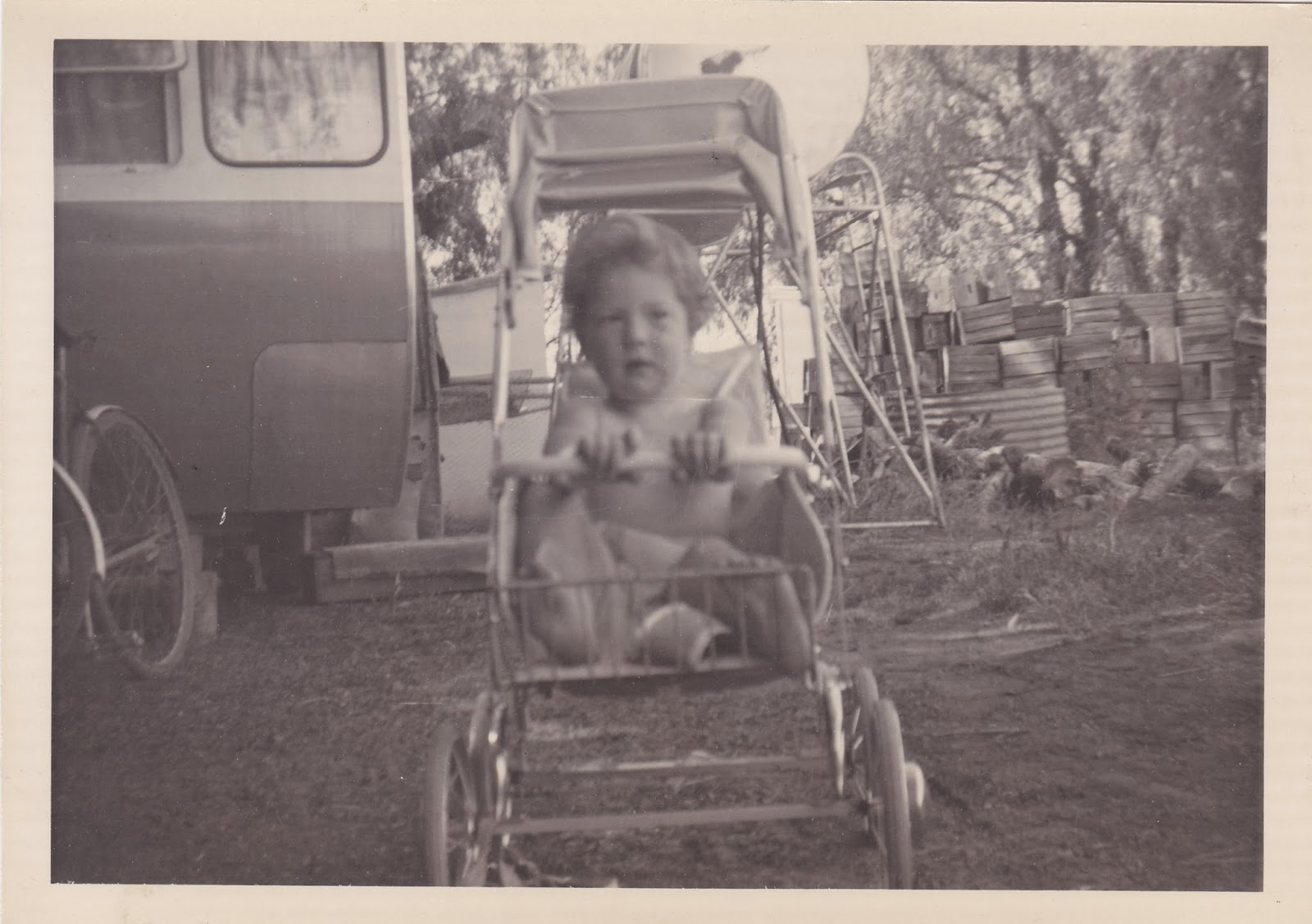 Do you (or your parents) have any memorabilia from when you were a baby? (ie. baby book, lock of hair, first shoes etc.)

My mum kept my hospital  card and infant health centre book. She also kept the plaits (no longer plaited) that I had cut off at about 11 or 12 years old along with 2 lots of her own childhood hair, in a crushed ice bag.  I have them now. 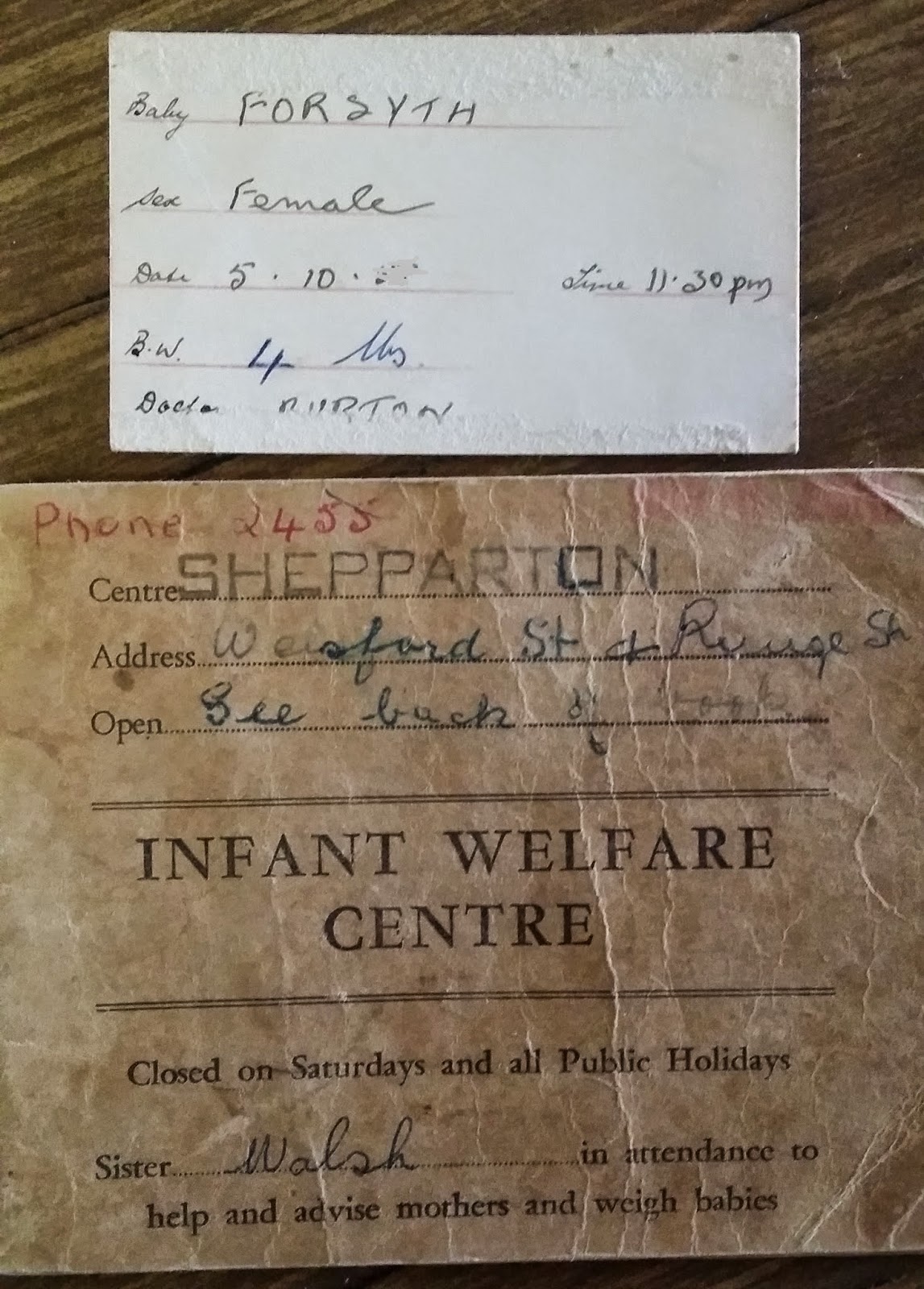 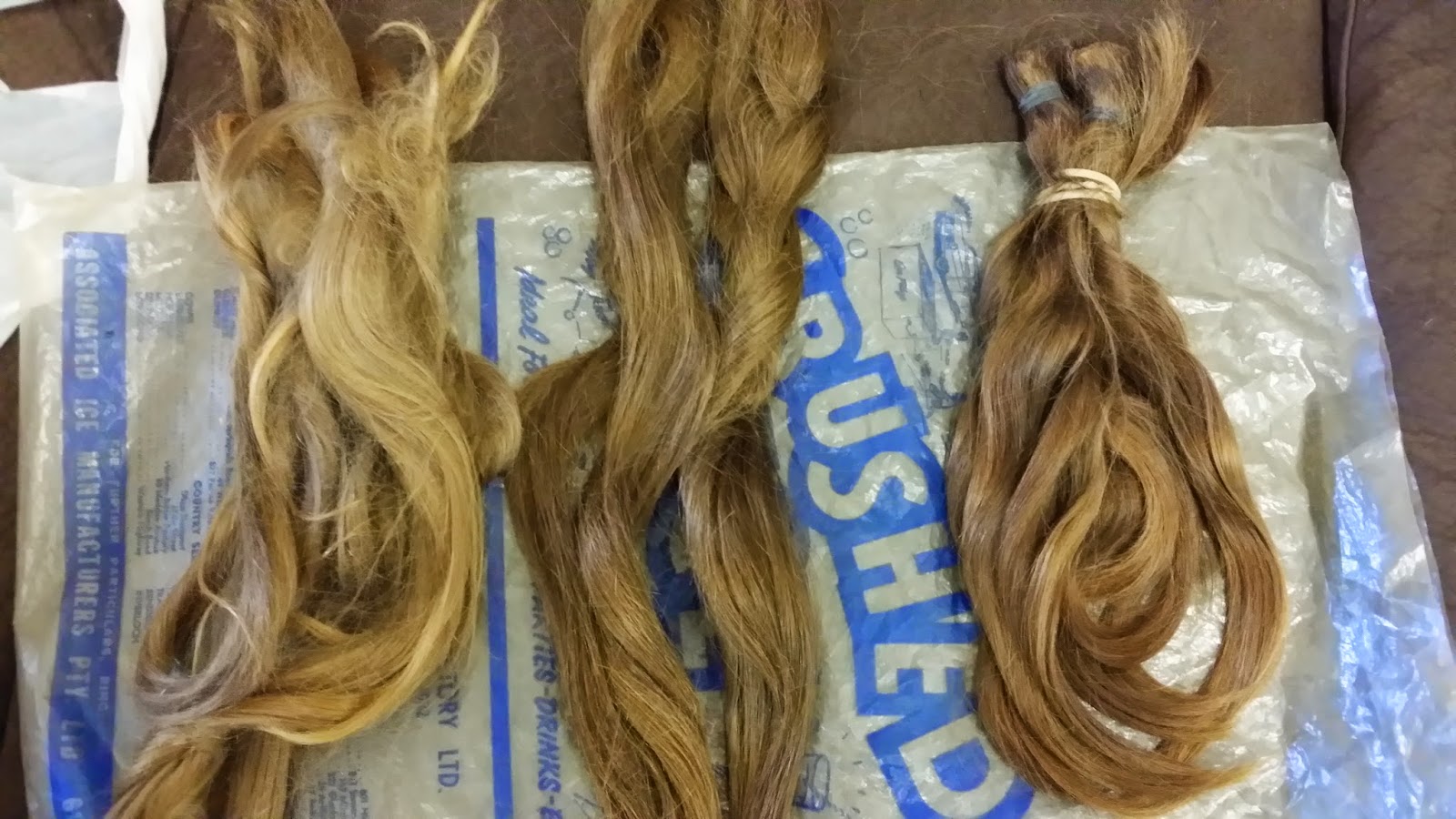 Do you know if you were named after anyone?
My Dad's name is Kerry and mum was Amelia Joan but known as Joan.  I was named Kerryn Joan.

And do you know of any other names your parents might have named you?
None that I remember hearing about.

What is your earliest memory?
I remember being at a large open grounds with family friends, for some reason car races come to mind.  The grass was dry and I must have got a grass seed in my knickers.  I  complained a lot (probably kicked up a hell of a racket) as I remember being in the back seat of our car while mum was trying to fish it out. I was perhaps around 3 or 4 years old.  Every time I look at the photo below I am reminded of that day so perhaps it was taken then. 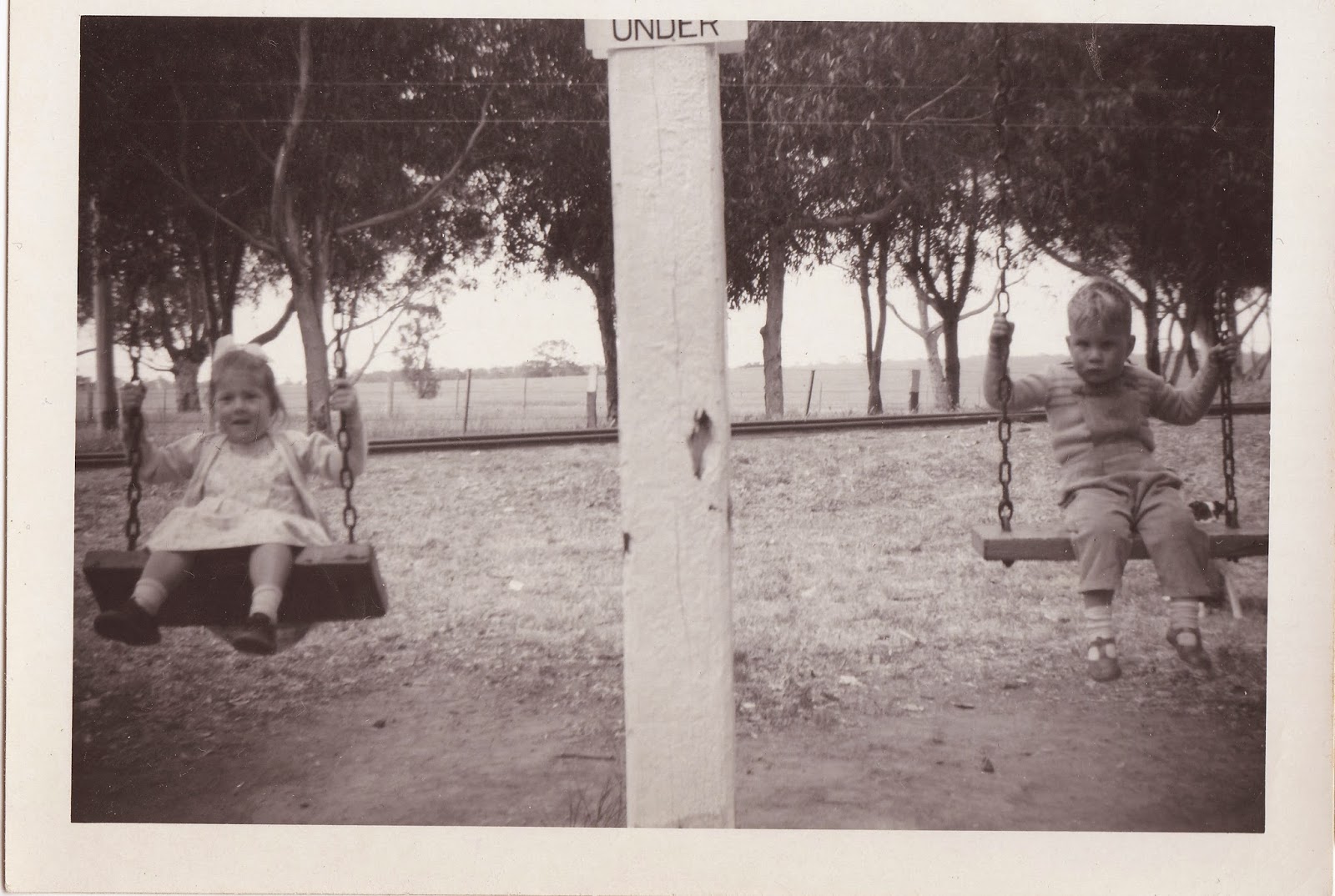 Did your parent/s (or older siblings) read, sing or tell stories to you? Do you remember any of these?
I don't remember being read to, but I'm an avid reader now.  My mum sang a lot generally but not to me specifically.  My maternal grandfather often told "tall stories" I can remember being enthralled with them.  I wish I could remember them now.

When you were young, do you remember what it was that you wanted to grow up to be?
A teacher

Did you have a favourite teacher at school?
Mr Murray in grade 4 at Gowrie Street primary school. 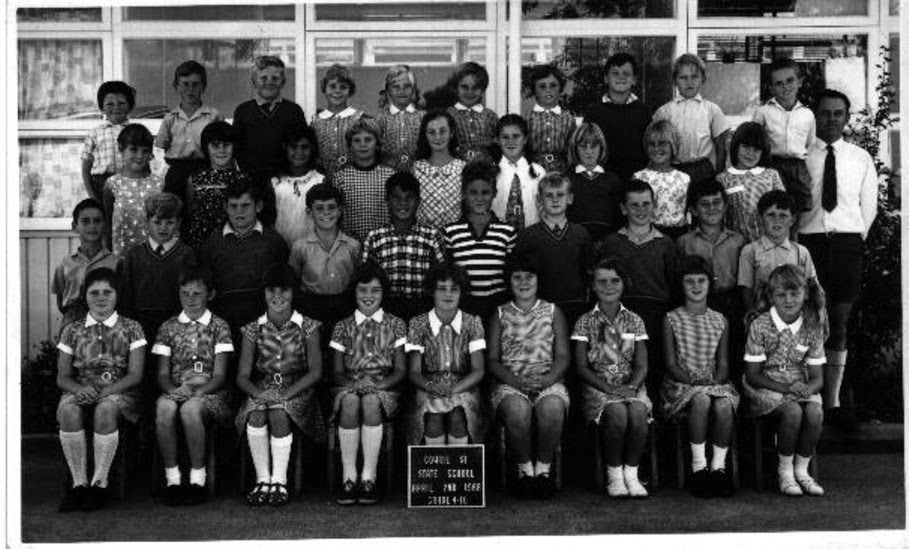 How did you get to school?
In early years, Mum drove us to school along with a number of other neighbourhood children.  I can't remember the make of car, but it had wheel arches in the back seat on which mum laid a plank of wood.  That made a two tier seat for probably eight kids.  No seat belts or fast driving in those days!
Neighbourhood friends that I have caught up with in recent years still remember being driven to school in mums car.

What games did playtime involve?
Hopscotch, swap cards and elastics are the main ones I remember.

Did you have a cubby house?
Yes Dad made me a cubby house out of two wooden fruit bins (we lived in the Goulburn Valley) one on the ground the right way up and the other turned over and secured on top to create a big box in which he cut a door and a window.  At one stage I also took over the garden shed.

What was something you remember from an early family holiday?
The Currumbin bird sanctuary and all the rainbow lorikeets landing on my brother's head.

What is a memory from one of your childhood birthday’s or Christmas?
I remember the year I got a bike for Christmas and Dad holding the back of the seat running along behind me down the street while I learned to balance.
Each birthday I would get a new outfit to wear to the annual Shepparton agricultural show which was always on a few days after my birthday.

What childhood injuries do you remember?
A very badly bruised and skinned knee. I landed full leap on the concrete at school during a game of high elastics. Also concussion after being thrown from my horse at 13 years old.  I spent days in the hospital.  I well remember the huge lump on my head.  My helmet must have come off mid-fall.

What was your first pet?
Jigs the dog and Tom the cat.  I used to dress Tom the cat in baby clothes and wheel him around in my pram.  I remember one day visiting the EDGE family over the road with Tom wrapped in a bunny rug and draped over my shoulder just like a baby.  Mrs EDGE was sure he was a real baby! she couldn't get over how he just hung there, such patience.

I can't not mention our very amazing Lassie the red Alsation.  She wasn't our first pet but I was always told she was the same age as me.  I think she may have belonged to my paternal grandparents first.  If my little brother tried to get out our side gate, Lassie would round him up and herd him back into the backyard.  Lassie died on my grandfather's farm at thirteen years of age.

Did your grandparents, or older relatives tell you stories of “when I was young ..?”
Not that I can recall, but they were all very close-mouthed.

What was entertainment when you were young?
Playing with the other neighbourhood children.  There were a lot of us around the same age and we always managed to keep occupied. It was a wonderful environment to grow up in.

Do you remember what it was it like when your family got a new fangled invention? (ie. telephone, TV, VCR, microwave, computer?)
I remember getting a TV and a record player. In those days, you had to have a TV licence and I remember Dad putting a huge aerial on the roof.  On hot nights they TV would be put at the window facing outside and we would all sit on the front lawn on a blanket in the cool to watch. I think some neighbours who didn't yet have TV also joined us.

Did your family have a TV? Was it black and white or colour? And how many channels did you get?
Our first TV was black and white, I don't think we got colour until I was a teenager.  In our area, we only got one channel which was GMV6 (Goulburn-Murray Valley I think) Now Win TV.  GMV 6 was a fun channel for children as they had a GMV6 Juniors club with a clown named Joey.  It was called Joey and the juniors.  Also, a local identity was Nancy Cato who is fondly remembered from her show The Magic Circle Club.

Did your family move house when you were young? Do you remember it?
We moved when I was about one-year-old to another house not far around the corner.  Then again, when I was 12 or 13 Dad bought a farm. When I was 17 my parents separated and Mum and I moved back into town.

Was your family involved in any natural disasters happening during your childhood (ie.fire, flood, cyclone, earthquake etc)
I can remember two floods, the first in the mid-1960s.  Our street was so flooded that we were riding down it in boats.   Then in 1974 our farm flooded. Mum sent us to our aunties place to stay until the water receded and things were cleaned up.

Is there any particular music that when you hear it, sparks a childhood memory?
Slim Whitman and Jim Reeves.  My mum sang along with their records that she played on our new record player.

What is something that an older family member taught you to do?
My maternal grandmother taught me to knit, crochet and bake scones.

What are brands that you remember from when you were a kid?
Sunny boy ice blocks, Peters Icecreams and Kellogs cornflakes when they had little toys included in the packet.

Did you used to collect anything? (ie. rocks, shells, stickers … etc.)
Swap cards.  I still have some of them. 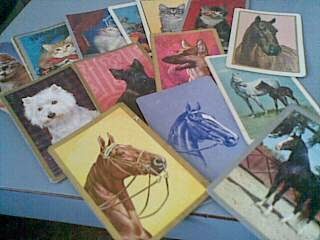 Share your favourite childhood memory.
Spending holidays at my maternal grandparents house.  They lived in Melbourne a lot of the time and I fondly remember when they were living at the Northern Golf Club at Glenroy where my gramp was a greenskeeper.
The couple who ran the kitchen had a daughter about my age and we used to use the stage tp put on pretend shows. I can still remember the wonderful smells that came from that kitchen.
By Kerryn Taylor - April 04, 2015