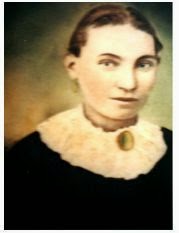 My maternal great-great grandmother, Anna Dorothea BARTSCH was reputedly born in 1855 on board the Danish ship "Acmel".  Her parents, two older sisters, grandparents, cousins and Uncles and Aunts were bound for Australia from Prussia.
Another family researcher has claimed Anna was not born on the ship.  I have yet to look further into the claim.

Anna's maternal grandparents, Georg NEBEL and Anna Dorothea nee SCHULTZ, settled in Westgarthtown (Thomastown) near Melbourne where there was a large Prussian community.

Anna Dorothea BARTSCH married Joseph HULME on the 16th of March 1865 at Beechworth. They went on to have ten children who all lived to adulthood.

Anna pre-deceased her husband by twelve years.  She passed away on the 5th of August 1908 at Oxley, Victoria.