Thankfully mental health has improved considerably in the last couple of decades but it still has a long way to go.
My husband's great grandfather, Bernard Riley, "drove me mad" trying to find information .... Is it any wonder.
It's not known when he came to Australia but poor Bernard Riley died at the Ararat Benevolent Asylum on the 2nd of September1879.
I had purchased the death certificate that was the closest fit, according to age, to being the death of our Bernard as the details below show it held no helpful information.
Died 2 September, 1879 at Lunatic Asylum, Ararat age 43 years.
Occupation = Charcoal something I can't read, perhaps burner?
Parents not known.
Cause of death = disease of the Brain.
Magisterial Inquiry held.
Buried Ararat Cemetery.
Born Down, Ireland.
Widower, further particulars not known.
(this whole page of deaths was at lunatic Asylum)

A few years later I was in touch with another family member, Diane Schneider, who had been able to obtain the asylum records for the same Bernard Riley as she had more, earlier, family stories to go by when tracing Bernard.


A distinctive feature of the grounds of the Asylum were the Ha-Ha Walls constructed around the patient's courtyards.  They consisted of a trench, one side of which was vertical and faced with stone or bricks, the other side was sloped and planted with turf. From the inside, the walls looked high to patients, preventing them from escaping, while from outside the walls looked low so as not to suggest imprisonment.

The asylum is now known as Aradale psychiatric Hospital . 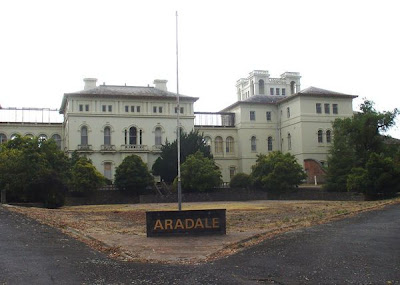 Bernard Riley was born about 1836 and had come to Australia possibly from Co. Down, Ireland.  He was an Irish Catholic.  He met and fell in love with a young Irish Presbyterian girl, Jane Russell.  The Russells had come to Australia from Co. Antrim, Ireland in 1838 on the ship Mandarin.  They settled in the Geelong area where Jane was born on the 15th of June 1843.
Bernard and Jane eloped and she was only 16 years old when their first child, John, was born in 1859.  Their next three children, Margaret, William and James were born in close succession at Warrnambool, Victoria. William Riley, born in 1862, was my husband's grandfather.
Their last living child, Jane, was born at Ballarat in 1866 and then poor Jane died during her last pregnancy in 1870.  This must have badly affected Bernard's mental state.

There was an inquest held into her death which produced the following statements.
Bernard Riley's deposition at coroner's inquest of his wife.  16th day of April A.D. 1870
I am a labourer residing at Bullarook Forest.  I am the husband of the deceased.  I brought her yesterday afternoon into the Daylesford hospital.  I saw the resident surgeon, he said my wife was dying.  I heard that the same evening - About six ?? I brought her to the hospital as an oupatient and Dr. McGregor prescribed for her - I wanted my wife to come into the hospital three weeks ago but would not saying she would be rather at home.  signed Bernard Riley his mark.

Dr. John McGregor's deposition at inquest.  16th day of April A.D. 1870
I am a legally qualified medical practitioner and resident surgeion at the Daylesford Hospital. About three o'clock yesterday afternoon the deceased was brought into hospital by her husband.  She was then in a dying which I told him.  She continued to sink and died at twelve o'clock the same night.  In knowing the cause of death I reported it to the coroner.  At the request of the Coroner I have made a post mortem.  Found no marks of external violence - in opening the chest and examining the heart I found it very much diseased - the valves expecially - the bicusp ? also showed symptoms of ....? disease.  The other organs were tolerably healthy - She was pregnant.  I consider the cause of death to have been vascular disease of the heart.  I had prescribed for her more than six weeks ...?  ...? but then she was dangerously ill.  I did not see again till she was brought in a dying state yesterday.

Jane Riley was buried as a Roman Catholic and a pauper in the Catholic section of the Daylesford cemetery  on the 17th of April 1870.  She was 26 years old.
I don't know who raised the rest of the children, it may have been a family member. There was no mention of them being with their father when his mental state worsened and he was arrested.

In May 1879 police constable Willliam Stoddart of Bungaree,  gave a declaration:
I am a constable of police stationed at Bungaree.  At 11 o'clock on the night of the 22nd  .....? my attention was called to the patient now before the court by a farmer residing? near who stated that he was going from fence to fence gathering wood and from his manner he judged him to be a lunatic.  I went to the place and arrested him by the road side where he was sitting.  He was then quite silly and vacant? in his conversation.  He was then charged with vagrancy and remanded  ...? with a view to medical examination.  31st day of May 1879

Then the following report was found.


Bernard Reilly was admitted to the Ararat Lunatic Asylum on the 5th of July 1879, he was paralised and very weak.  He took a bad change on the 29th and was ordered to bed where he gradually sank and died at 3.45pm on 2nd September, 1879.  I was present at death.  Signed Richard Hill, attendant at Asylum.