The historical document I was so excited about getting was a transcription of the Kirk Session minutes for Turiff, (St. Ninians) Aberdeenshire, Scotland.   NAS- CH2/871/2

These minutes were badly damaged by water so are very very patchy but enough information could be gleaned to get the general drift of the happenings.

My 4th great grandmother was Jean Hay born at Alvah, Banffshire, Scotland to James Hay and Janet Christie.
James Hay, being such a common name in the area, was a bit difficult to research.

Finally, through the process of elimination, the Church records for Alvah  and most importantly the Turiff Kirk session minutes it was revealed that James Hay had first married a Margaret Dustan in 1784.  They had 2 children, Catherine born 1784 and James born 1786.  No death for Margaret has been found so I researched Catherine and found she had married a George Webster at Turiff in 1820.

James married Janet Christie in 1791.  No birth registration has been found for Jean Hay but heaps of further records of her life have come to light.

Jean was always listed as a midwife and Unmarried in all the census.
Her daughter, Helen Thomson, was born in 1825 at Turiff.

Helen married Robert Forsyth in 1847 at the Manse of Aberdour.
In the 1861 census, Jean Hay was head of household at 59 High Street, New Aberdour, Aberdeenshire, Scotland.  Also living there were, Alexander and Jean Forsyth, the parents-in-law of her daughter Helen. 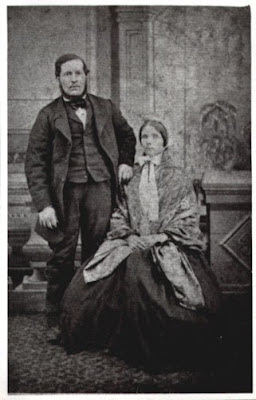 Photos courtesy of Patrick and Dorothy Forsyth of Fraserburgh.


A James Thom(p)son, seemingly of Huntly, was brought before the Kirk to answer to allegations by Jean Hay that he was the father of her child.

The patchy transcription is as follows:

I was told that normally the kirk would strongly instruct the couple to marry unless of course the male involved was already married.

I would dearly love to fill in all those gaps!