Patrick Forsyth in Aberdeenshire, Scotland, has a letter that his Uncle (my great great grandfather) Robert Forsyth wrote home to his mother from Coutts Island, New Zealand.

Robert Forsyth and his wife Jessie nee Farquhar emigrated from Scotland to New Zealand in 1874.

I am extremely grateful to Patrick for sharing this letter with myself and other family members.


Robert wrote:
My Dear Mother,
I now write you this few lines to let you know that we are all well at present hopping (sic) that this will find you all the same.  You will remember the Simpsons that lived near the Cranbog there is one of them come to live on our Island.  She is housekeeper for a man about 2 miles from us. She has been calling on us twice.  Maggie is her name she came out here about 12 years ago to keep house for her brother but we have never seen her till she came up here.  I hope Helen is getting on all right you was to write and let us know how she was but we never had any word so I suppose she is all right.


I forget if I ever told you that there was another Aberdour man here Alex Mitchel a son of old Cork Mitchels the soutar.  He is a grocer to trade but is worse for drinking than the old man was.  I don't know what he is doing now I have not seen him for the last 7 or 8 years.  You was asking how Willie Dickie was doing Him and his wife have been separated for years.  She lives in Kaipoi (sic) and goes out washing and he goes about the country working and drinks all the money he makes.  Sandy Dickie is married and has a place about 40 miles from here.  He is fairly steady.

We had a grand harvest here this year The best for years and very good prices but there was a lot of people that lived near the hills had there grain nearly all shaken out with the wind.  All round we can't complain.  We have had a very wet winter here more rain than there has been for the last ten years.  Last year we had plenty of snow but no rain.

How is John always getting on with his farm.  I have never written to him yet but will have to make a start sometime.  He would be able to give us more news than we could give him.    How is George and his wife getting on.  She has got a bad leg or something hasn't she. But I think he ought able to give you a little help when they have no family but just themselves two to keep.
I ought to have written long before this time but it is better late than never.  We have been very busy for a good bit we have been having additions made to the house 2 new rooms ...?... that takes time & money to pay.   Must thankyou very much for sending the Peoples Journal.  No more at present but I herewith enclose you a post office order for two pounds.  Write soon with love to all.  We remain your loving son & Daughter
R . J  Forsyth 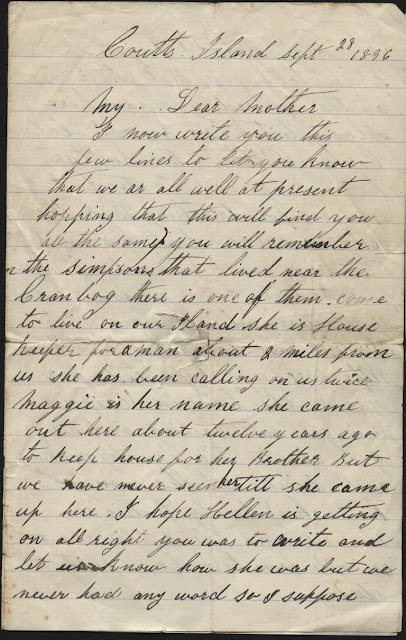 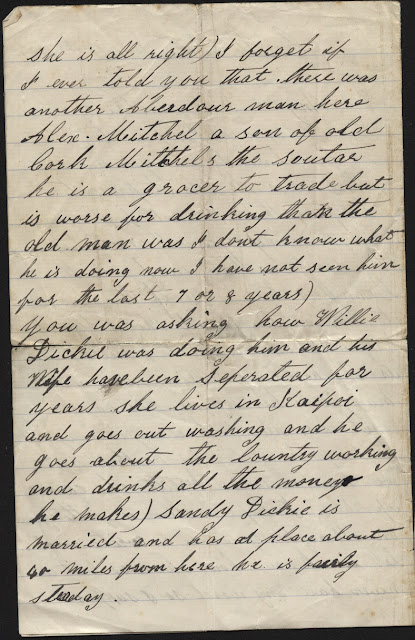 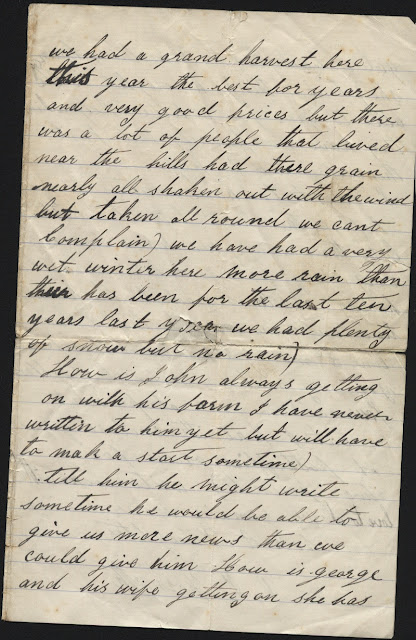 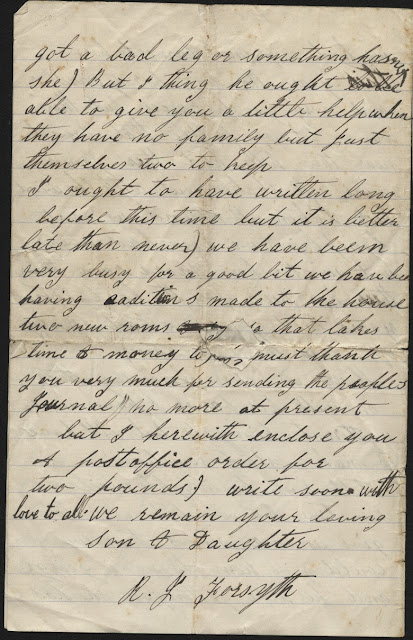