My paternal grandmother Brenda Mary Adams and her first husband Eric Daniels were married at St. Michael's Church, North Melbourne, Victoria on the 1st of September, 1928.
Information on the marriage certificate states that Eric was born at Buncle Street, North Melbourne and Nana was born nearby in Kensington.
Eric gave his parents names as William McDonald Daniels and Florence Mary Powell, yet his mother was named on his death certificate as Ethel Rose Stowell. (the informant was my Nana)
I had found Ethel and William divorced in 1912 and William married Florence Powell in 1913.
Witnesses were Nana's eldest sister, Alice Crowl nee Adams and L. Powell.
I haven't been able to find if  L. Powell was a relative of Eric's stepmother. 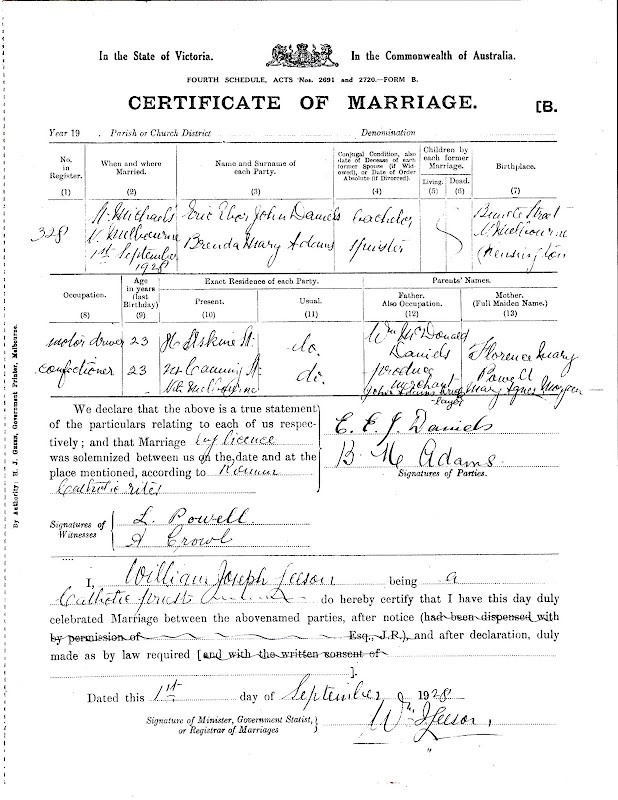 A couple of years ago I recorded in a post what I found about  Eric's parents in Trove.


Eric and Brenda went on to have their little boy Ronald Francis Daniels in February 1930.
They were living at 10 Molesworth Street, North Melbourne at that time.
Tragically Ronald died of Meningitis in December 1931 and Eric died of Hodgkin's disease in January 1932.  An earlier post in Eric's memory HERE
By Kerryn Taylor - September 01, 2020