I was a little bit out.

Thanks to a Facebook post about my findings Caitriona McGinnity referred me to her brother Ronan McAdam who was very knowledgable about the Rowan Road properties.  I'm extremely grateful for their help.

Their Granny, Bridget Morgan had actually lived in the house I had pictured. (below) 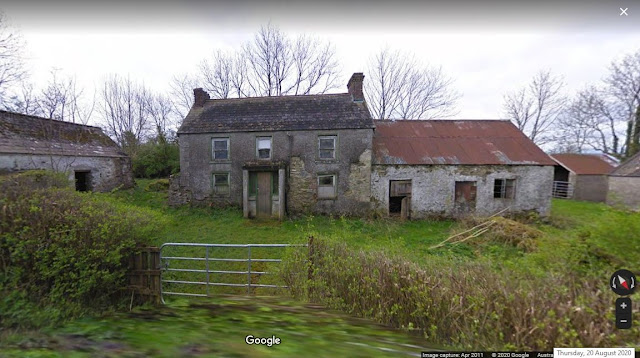 "The picture you have of the house along the road with the pink eaves was where my granny was reared no. 40 rowan Road. Plot 32. The lands differ today slightly with some of plot 33 in it. The long narrow field along the road on plot 33 is known as (Fayley's meadow) think it belonged to a Felix Morgan from plot 30. The house in plot 33 is no longer there no one remembers it being there.

You're right there were quite a few Morgans about. My granny's family were (Art Morgans) there was also (Buck Morgans) and (Miles Morgan) whose family are still around too.

You have a picture of their house as well, it has been knocked down since though. There was also another Morgan not sure their nickname will try and find out. Old House is still there but long out of Morgan name. Am sure they were all related one way or another down the line. You may be closer related to Felix Morgan.

Caroline Hughes, a descendant of Miles Morgan agreed with Ronan's calculation that Alexander Morgans plot was this one pictured from Google Maps, right on the bend, just a little further down the road from the above house.

The picture of what was likely Miles Morgan's house from Google Maps which Caroline says was further up at plot 27 on the Griffiths map. 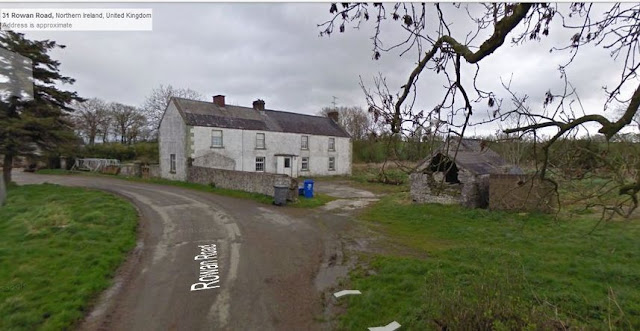 I had also received this helpful information a few years back from the "Ireland reaching out" website.

"The property that Alexander Morgan had in 1864 was plot 33, in Griffiths Valuation, which was a farmhouse, outbuildings and 12 acres of land. (IT would be easy enough to locate today, should you wish to do so. Plot 33 is on the modern Rowan Road, a mile or two west of Keady. Just on the border with Co Monaghan.) Immediately beside him were 6 other Morgan households which are likely to be relatives of his. The revaluation records show the property changing to Francis Morgan junior in 1874 which normally indicates Alexander had died by that year. Francis acquired the adjacent plot 33 in 1887 increasing his property to just over 15 acres. The property changed to Bridget Morgan in 1901 and then again to Thomas in 1907. Thomas purchased the property in 1914 under the Land Act (prior to that it had been rented) and he remained the occupant when that set of records end in 1929."