After graduating from Scotch college, Allan FLEMING was offered a place as a cadet reporter at the Melbourne Argus newspaper.
He later went to the Courier-Mail, Brisbane, where he became assistant editor of the Sunday-Mail, and wrote leaders (editorials) and a daily column for the Courier-Mail.
A short stint at the Sun, Melbourne, followed his war service; he was senior magazine editor and a columnist.

I have found many of his articles and would like to record them amongst my Trove Tuesday posts. 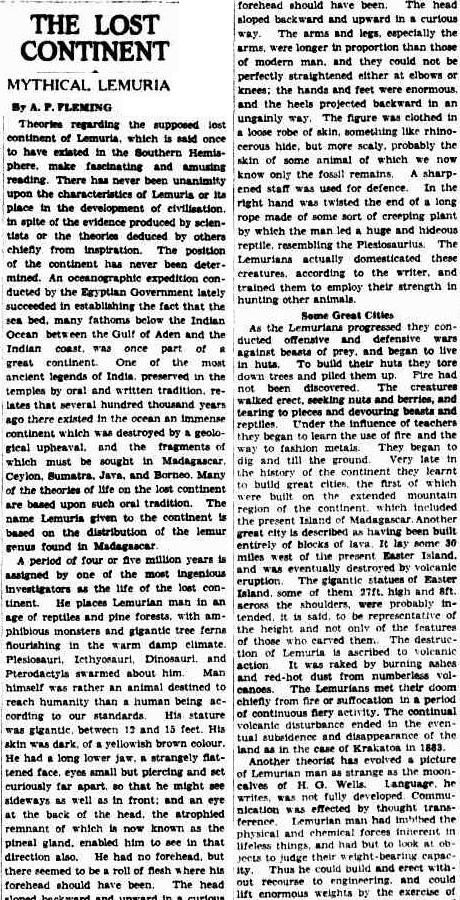 Theories regarding the supposed lost continent of Lemuria which Is said once to have existed in the Southern Hemisphere make fascinating and amusing reading There has never been unanimity upon the characteristics of Lemuria or its place in the development of civilisation In spite of the evidence produced by scientists or the theories deduced by others chiefly from Inspiration. The position of the continent has never been determined An oceanographic expedition conducted by the Egyptian Government lately succeeded in establishing the fact that the seabed, many fathoms below the Indian Ocean between the Gulf of Aden and the Indian coast, was once part of a great continent. One of the most ancient legends of India preserved in the temples by oral and written tradition, relates that several hundred thousand years ago there existed in the ocean an immense continent which was destroyed by a geological upheaval, and the fragments of which must be sought in Madagascar, CeyIon, Sumatra, Java, and Borneo. Many of the theories of life on the lost continent are based upon such oral tradition. The name Lemuria given to the continent Is based on the distribution of the lemur genus found in Madagascar

A period of four or five million years is assigned by one of the most ingenious investigators as the life of the lost continent. He places Lemurian man in an age of reptiles and pine forest, with amphibious monsters and gigantic tree ferns flourishing In the warm damp climate Plesiosauri, Ichthyosauri, Dinosauri, and Pterodactyls swarmed about him. Man himself was rather an animal destined to reach humanity than a human being according to our standards. His stature was gigantic between 12 and l5 feet. His skin was dark of a yellowish brown colour. He had a long lower jaw, a strangely flattened face, eyes small but piercing and set curiously far apart, so that he might see sideways as well as in front; and an eye at the back of the head, the atrophied remnant of which Is now known as the pineal gland, enabled him to see in that direction also. He had no forehead but there seemed to be a roll of flesh where his forehead should have been. The head sloped backwards and upward In a curious way. The arms and legs, especially the arms, were longer In proportion than those of modern man and they could not be perfectly straightened either at elbows or knees; the hands and feet were enormous and the heels projected backwards In an ungainly way. The figure was clothed in a loose robe of skin something like rhinoceros hide but more scaly, probably the skin of some animal of which we now know only the fossil remains. A sharpened staff was used for defence. In the right hand was twisted the end of a long rope made of some sort of creeping plant by which the man led a huge and hideous reptile resembling the Plesiosaurius. The Lemurians actually domesticated these creatures according to the writer and trained them to employ their strength in hunting other animals.

As the Lemurians progressed they conducted offensive and defensive wars against beasts of prey, and began to live in huts. To build their huts they tore down trees and piled them up.  Fire had not been discovered. The creatures walked erect seeking nuts and berries and tearing to pieces and devouring beasts and reptiles. Under the influence of teachers they began to learn the use of fire and the way to fashion metals. They began to dig and till the ground. Very late in the history of the continent they learnt to build great cities, the first of which, were built on the extended mountain region of the continent, which included the present Island of Madagascar. Another great city is described as having been built entirely of blocks of lava. It lay some 30 miles west of the present Easter Island, and was eventually destroyed by volcanic eruption. The gigantic Statues of Easter Island, some of them 27ft high and 8ft across the shoulders were probably intended, it is said, to be representative of the height, and not only of the features of those who carved them. The destruction of Lemuria is ascribed to volcanic action. It was raked by burning ashes and red hot dust from numberless volcanoes. The Lemurians met their doom chiefly from fire or suffocation in a period of continuous fiery activity. The continual volcanic disturbance ended in the eventual subsidence and disappearance of the land as in the case of Krakatoa in 1883.  Another theorist has evolved a picture of Lemurian man as strange as the moon calves of H. G. Wells. Language, he writes, was not fully developed. Communication was effected by thought transference. Lemurian man had imbibed the physical and chemical forces inherent in lifeless things, and had but to look at objects to judge their weight-bearlng capacity. Thus he could build and erect without recourse to engineering, and could lift enormous weights by the exercise of willpower alone. He lived in caves and excavations and was still physically in a semi-material state.

An amazing contribution to Lemurian lore comes from California. The author, writing in a Sunday newspaper, tells of the discovery of a community in California said to be of Lemurian origin He writes - "I was travelling in a train near Mount Shasta, when gazing upon its splendour, I suddenly perceived that the whole southern side of the mountain was ablaze with a strange, reddish green light. A flame of light that grew faint, then flared up with renewed brilliance. My first conjecture was a forest fire but the total absence of smoke discounted that theory. The light resembled the glow of Roman candles. The thing intrigued me . . . . Later I motored to the point of my investigations and discovered that the existence of a mystic village on Mt Shasta was an accepted fact. All attested to the weird rituals that were performed on the mountain side at sunset, midnight and sunrise. Also they freely ridiculed my avowed trek into the sacred precincts, assuring me that an entrance was as difficult and forbidden as an entrance into Tibet. I learned that the existence of Lemurian descendants on Mt Shasta was vouched for some years ago by no less an authority than the eminent scientist Professor Edgar Lucin Larkin, for many years director of the Mt Lowe Observatory in Southern California.

Professor Larkin, with determined sagacity, penetrated the Shasta wilderness as far as he could, or dared, and then cleverly continued his investigations from a promontory with a powerful long distance telescope. What the scientist saw, he reported, was a great temple in the heart of the mystic village, a marvellous work of carved onyx, rivalling in beauty and architectural splendour the magnificence of the temples of Yucatan. That these Lemurians who live in California are cognisant of the disaster that befell their ancestors ls revealed in the fact that each night at midnight throughout the entire year they perform a ritual thanksgiving to 'Guatama' which Is their name for America. The chief object of this ceremony is to celebrate the escape of their forebears from the doomed Lemuria and their safe arrival in Guatama.
By Kerryn Taylor - February 01, 2017