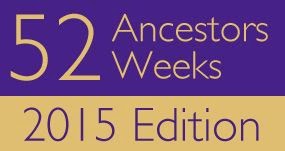 Week 1 - A Fresh Start - My great-great-grandmother, Margaret Alice KELLY, known as Alice, was one of many other Irish people who made a fresh start in Australia.

Week 3 - Tough Woman - I would call my great-grandmother a tough woman after finding many years of newspaper articles telling of her court battles to get my great-grandfather to pay child maintenance for their two youngest children.  One of those children was my grandmother.

Week 4 - Closest to my birthday - My 3 x great grandmother, Isabella BEATON, is the ancestor whose birthday (day and month) is closest to mine.

Week 5 - Ploughing through - Being an Aussie, my spelling is PLOUGH despite spell check. It is not a plough in the photo, but I'm sure these beautiful animals have pulled plenty of them.

Week 7 - Forbidden Love - It is not known how or exactly where Jane and Bernard Riley met, but it seems they eloped which no doubt would have caused quite a stir in her family.

Week 9 - Close to Home - W. F. Fleming - The ancestor who lived closest to where I live now would be my great great grandparents William Findlay FLEMING and his wife Ann Jane, nee KNIGHT

Week 10 - Brain Storming - Thank you Allan FLEMING! - The optional theme for week 10 is 'stormy weather' but I couldn't come up with anything to fit that theme so I changed it slightly to 'Brainstorming'  to suit a recent article I found on my mum's cousin, Allan FLEMING.

Week 14 - Favourite photo - My favourite photo is of my maternal grandmother, Daisy Marion MORGAN and her sister Clarice May MORGAN.

Week 15 - How do you spell that? - Is it spelt Bartsh or Bartsch?  Probably both.

Week 18 - Where There's a Will - Where there's a Will there is usually a dispute as was the case with the Will of my Paternal 2nd great-grandmother, Alice Morgan nee Kelly.

Week 23 - Wedding - Daisy Morgan and Archie Fleming 1932 - My maternal grandparents were married on the 8th of October 1932.

Week 24 - Heirloom - I treasure the "fancy dress" my maternal grandmother made.

Week 26 - Halfway is Robert FORSYTH - My halfway subject was whoever was born halfway between my earliest confirmed direct ancestor (1748) and myself (1958).  This turned out to be my great-great-grandfather, Robert FORSYTH who was born in 1852 in New Aberdour in Aberdeenshire, Scotland.

Week 27 - Independent - The American Declaration of Independence took place on the 4th of July in 1776.  As I have no direct ancestors that I know of in America I wrote about an ancestor who was born in that year. According to the 1841 census my 4th great grandmother, Agnes CUNNINGHAM, was born in 1776 in Largo, Fife, Scotland.

Week 28 - Road trip - After his arrival in Australia from England in 1855, my 3rd great grand-uncle, Edward HULME, wrote about his epic road trip from Melbourne to the Beechworth goldfields.

Week 29 - Musical interview by Allan FLEMING. - I don't have any musical ancestors but in looking for news articles written by my mum's cousin, journalist Allan FLEMING, I found an amusing interview he had done in 1939 with the famous harmonica player, Larry Adler.

Week 30 - Challenging - some of my more challenging ancestors.

Week 31 - Easy to research? - My maternal great-great-grandfather, William Finlay FLEMING, left us quite a lot of information about himself in his interviews with journalists in the early 1900s.  In that respect, he was easy to research

Week 33 - Alexander FORSYTH - Theme - In 1880, there was a special U.S. census schedule for “Defective, Dependent, and Delinquent Classes” — the blind, deaf, paupers, homeless children, prisoners, insane, and idiotic. Do you have someone in your family tree who would have been classified as such?

Week 36 - Working for a Living - My farming grandfather.

Week 37 - Large Family - 52 Ancestors - Week 37 - The largest family in my ancestry would have to be my Mum's FLEMING family.