The optional theme for week 10 is 'stormy weather' but I couldn't come up with anything to fit that theme so I changed it slightly to 'Brain storming'  to suit a recent article I found on my mum's cousin, Allan FLEMING.  The print is faded and a little hard to read in places so I have transcribed the article below.
With all the research I have done for my family history using the National Library, to find out that my mum's cousin was amongst those that made it possible is amazing.  I never knew him but I certainly wish I  had.   Thanks Allan! 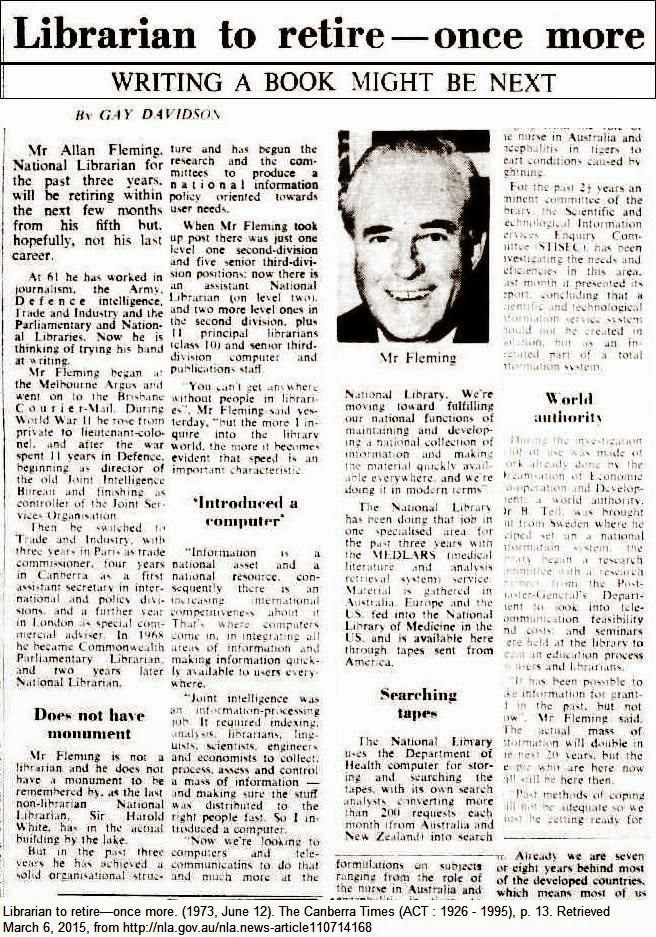 Librarian to retire - once more

Mr Allan Fleming, National Librarian for the past three years, will be retiring within the next few months from his fifth but, hopefully, not his last career.

At 61 he has worked in journalism, the Army Defence intelligence, Trade and Industry and the Parliamentary and National Libraries.  Now he is thinking of trying his hand at writing.

Mr Fleming began at the Melbourne Argus and went on to the Brisbane Courier Mail.  During World War II he rose from private to lieutenant-colonel, and after the war spent 11 years in Defence, beginning as director of the old Joint Intelligence Bureau and finishing as controller of the Joint Services Organisation.

Then he switched to Trade and Industry, with three years in Paris as trade commissioner, four years in Canberra as a first assistant secretary in international and policy divisions and a further year in London as special commercial adviser.  In 1968 ge became Commonwealth Parliamentary Librarian, and two years later National Librarian.

Does not have monument


Mr. Fleming is not a librarian and he does not have a monument to be remembered by, as the last non-librarian, Sir Harold White, has in the actual building by the lake.

But in the past three years he has achieved a solid organisational structure and has begun the research and the committees to produce a national information policy oriented towards user needs.

"You can't get anywhere without people in libraries," Mr Fleming said yesterday, "but the more I inquire into the library world, the more it becomes evident that speed is an important characteristic.


"Information is a national asset and a national resource, consequently there is an increasing international competitiveness about it.  That's where computers come in, in integrating all areas of information and making information quickly available to users everywhere.

"Joint intelligence was an information-processing job.  It required indexing, analysis, librarians, linguists, scientists, engineers and economists to collect, process, assess and control a mass of information - and making sure the stuff was distributed to the right people fast.  So I introduced a computer."

"Now we're looking to computers and telecommunications to do that and much more at the National Library.  We're moving toward fulfilling our national functions of maintaining and developing a national collection of information and making the material quickly available everywhere and we're doing it in modern terms."

The National Library has been doing that job in one specialised area for the past three years with the MEDLARS medical literature and analysis retrieval system service.  Material is gathered in Australia, Europe and the U.S, fed into the National Library of Medicine in the U.S. and is available here through tapes sent from America.


The National Library uses the Department of Health computer for storing and searching the tapes, with its own search analysis converting more than 200 requests each month from Australia and New Zealand into search formulation on subjects ranging from the role of the nurse, in Australia and encephalitis in tigers to heart conditions caused by lightning.

For the past 2 1/2 years an eminent connittee of the library, the Scientific and Technological Information Services Enquiry Committee (STISEC) has been investigating the needs and deficiencies in this area.  Last month it presented its report, concluding that a scientific and technological information service system should not be created in isolation, but, as an integrated part of a total information system.


During the investigation a lot of use was make of work already done by the Organisation of Economic Co-operation and Development; a world authority.  Dr B. Tell, was brought out from Sweden where he helped set up a national information system, the library began a research committee with a research engineer from the Post-Master-General's Department to look into telecommunication feasibility and costs and seminars were held at the library to begin an education process on users and librarians.

"It has been possible to take information for granted in the past, but not now". Mr Fleming said.

"The actual mass of information will double in the next 20 years, but the people who are here now will still be here then.

Past methods of coping will not be adequate so we must be getting ready for it.  Already we are seven or eight years behind most of the developed countries, which means most of us are up to 15 years behind in our thinking.

"The size of the problem is such that it needs co-ordination and rationalisation in the collecting and processing of material, and it needs to be done in one central place to make information services easily available without duplication.

"That sounds like empire building, but there's no suggestion of our taking over other libraries - we'll simply be linked in to provide access to all that's publicly available.  We do have the national responsibility and a lot of people relying on us.  Besides we have to explain frankly why we need more money and more staff.  The National Library vote is around six million dollars, increasing by 10 to 15 per cent each year.  The initial handling of information material has to be done by people but the later manipulation can be done by computer and the transmission by telecommunication.  We already have som computer-services costs - so its simply a matter of upping our percentage increase and making the computer and telecommunication investments that are needed anyway."

Increasing the budget may well be the "simple matter"  that Mr Fleming suggested.  The President of the Senate, Sir Magnus Cormack, in announcing his retirement from the Council of the National Library, spoke last Thursday of it becoming "the centre of a system of knowledge retrieval....... hooked into a world-wide system".

And the Leader of the Government, Senator Murphy, went rather further in saying that the alteration in the concept of the National Library was "probably the most important even in the progress of Australia".

"If one were to select a project on which money should be spent", he said, "I suppose there is no endeavour whatever in Australia ..... which would be more important.  There is no project which is more deserving of support from all Australia than this concept of a national information centre which we hope will be fairly soon realised".

In spite of being immersed the new concept for three years and now beginning to see some public awareness of its importance, Mr Fleming is convinced that he will be able to stop, relax and leave it alone in three or four months.


But just to make sure, he is thinking of taking off to a French village for a couple of years, making trips around Europe and starting his first book.

"I don't know what it will be".  he admitted.  "I haven't had time to think anything else through recently.  I suppose it's a bit late now but I did have a plan to move in fast when Ian Fleming died.

"I even wrote the first sentence:  'The son of James Bond slowed his Maserati down to 160 miles an hour and lit a cigarette' ".