52 Ancestors week 4 - Closest to my birthday

My 3 x great grandmother, Isabella Beaton, is the ancestor whose birthday (day and month) is closest to mine.

She was born in Edinburgh, Scotland on the 2nd of October 1821, the second eldest child and first daughter to parents William Beaton, a mason and Jane nee Dick.

In 1841 Isabella sailed to Australia on the emigrant ship INDIA with her brother William Beaton and sister-in-law Mary.

They were very lucky to arrive here at all!

Cousin Harold Shipston has done a wonderful video about Isabella for the family archives.


LOSS OF THE INDIA EMIGRANT SHIP.
(From the Port Phillip Herald, October 19.)
Captain Galbraith, yesterday, informed us that the following report of the loss of this ill-fated vessel, which appeared in yesterday's Patriot, was drawn up by himself and Mr. Kissock, a passenger by the Alcmena, and that it contains as much infor- mation relative to the melancholy catastrophe as it is possible to give. The India was from Greenock bound to Port Phillip with emigrants. The manifest even was not saved. The fol- lowing is the report :
The India sailed on the 4th June last with 189 souls on board, crew included, and was totally destroyed by fire on the 20th July, in 16 south latitude, and 33 west longitude, under the following circumstances : the third mate and one of the boys were below about one o'clock, p.m., drawing off spirits, when the candle they used accidentally fell on some spilled rum, which immediately caught fire, and the flames spread with such rapidity that all efforts at extinguishing the tremendous blaze were unavailing, and the ship soon became one mass of flame. Another ship, a French whaler, was fortunately in sight, about nine miles to windward; but nearly an hour elapsed ere those on board of her became aware of the state of the India. On observing her condition she immediately bore down, and on nearing lowered all her boats, and used every exertion to rescue the unfortunate sufferers. The India's boats were also got out ; but on the first boat making the attempt to take some of the people off the burning ship, a tremendous rush was made to get into her she was immediately overloaded and capsized, and in that the greatest loss of life occurred; the mate of the India was in the boat at the time, and with great difficulty succeeded in getting into the other boat, which he took command of, and succeeded in taking all the remainder off the wreck, and reshipped them into the French boats, which conveyed them to the ship, not one of them daring to approach any part of the wreck, after seeing the fate of the India's boats, which their ignorance of the language may partly account for. The mate's exertions seem to have been very great, as all the survivors speak most enthusiastically of his gallant conduct. The scene as described by them must have been truly awful; the flames spread with such rapidity that no one saved a single article except such clothes as were on their backs, and ere they could be rescued from their perilous situation, the flames had driven them from the deck to the bowsprit, from which they dropped into the sea, as they could be picked up by the boat ; indeed many had their clothes burnt off, and were conveyed literally in a state of nudity to the French ship, where they were received by the French captain, who was assisted by the captain of the India (he having early gone on board that ship where his presence was most required, he being the only, one who understood the French language,) in "clothing the naked" with such dresses as the ship afforded, and they were treated with the greatest kindness while on board that ship. On receiving the host of unfortunates on board, he steered for Rio de Janeiro, the easiest made harbour, where he discharged them in safely ; several of the females having for their only dress flannel shirts supplied them by the French sailors. The liberality of the British residents and ship-masters in Rio de Janeiro is worthy of the highest commendation. The merchants presented the French Captain with a gold chronometer, and the ship-masters with an elegant gold snuff-box, with appropriate inscriptions on both, and who also collected by subscription upwards of 1,000l. to assist in refitting those who had lost their all in the India. It would be unjust here to pass over in silence the magnificent donation of the officers and crews of the American frigate Potomac, and a schooner of war, who subscribed 550 dollars towards the fund. Shortly after the emigrants were landed, a small island in the bay of Rio de Janeiro was engaged by the British Consul for their use, where they appear to be comfortably lodged. The girls are of a decidedly superior class, were all well dressed, and wore white chip hats, which gave them a particularly interesting appearance. Ten of the men were on the island when the writer of this visited it, they being mostly employed on board the barque Grindley, of Liverpool, the ship employed to carry them all to this port, where they may be expected to arrive about the end of this month, as it was expected the Grindley would be ready for sea about three weeks after the Alcmena left Rio de Janeiro (7th August.) which vessel conveyed the intelligence of the melancholy disaster. To mollify those who expected friends out in the India, the names of the drowned are subjoined, though all the survivors are decidedly of opinion that not one of them had relations in Australia:-Rev. William McKay, Robert Burns, John Hut, William Nott. Frederick Mitchell, John Stewart, William Stewart, James Love, Samuel Cameron, John Coke, Duncan Grant, William Clelland, Andrew Tait, John Stewart, Andrew Dingwall, Robert McGregor, Robert Patterson; and Charles Clements, the boatswain of the ship, the only one of the crew lost.
http://trove.nla.gov.au/ndp/del/article/2955329


The following relationship chart shows my line to Isabella.  The Ann Pike, daughter of Isabella Beaton and John Pike that Harold mentions in the video is Mary Ann Pike, my great great grandmother, also known as Marrion 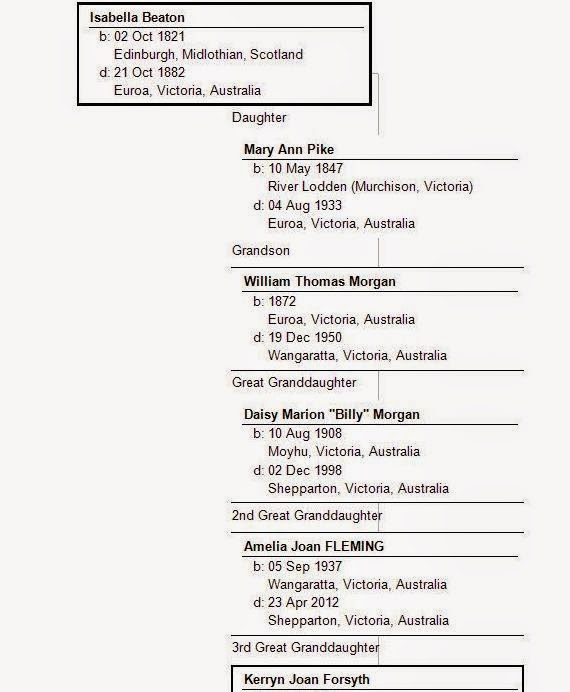