Eleanor Grace Fleming, known as Nellie, was the seventh child (fifth daughter) of the eleven children born to my great grandparents Donald Fleming and Margaret nee Hart.
On the 17th of March 1925 at Wangaratta she married Roy Merten Vines.
The best man was her brother, Donald Percy Fleming and the bridesmaid was her sister Lilian Myrtle Fleming. 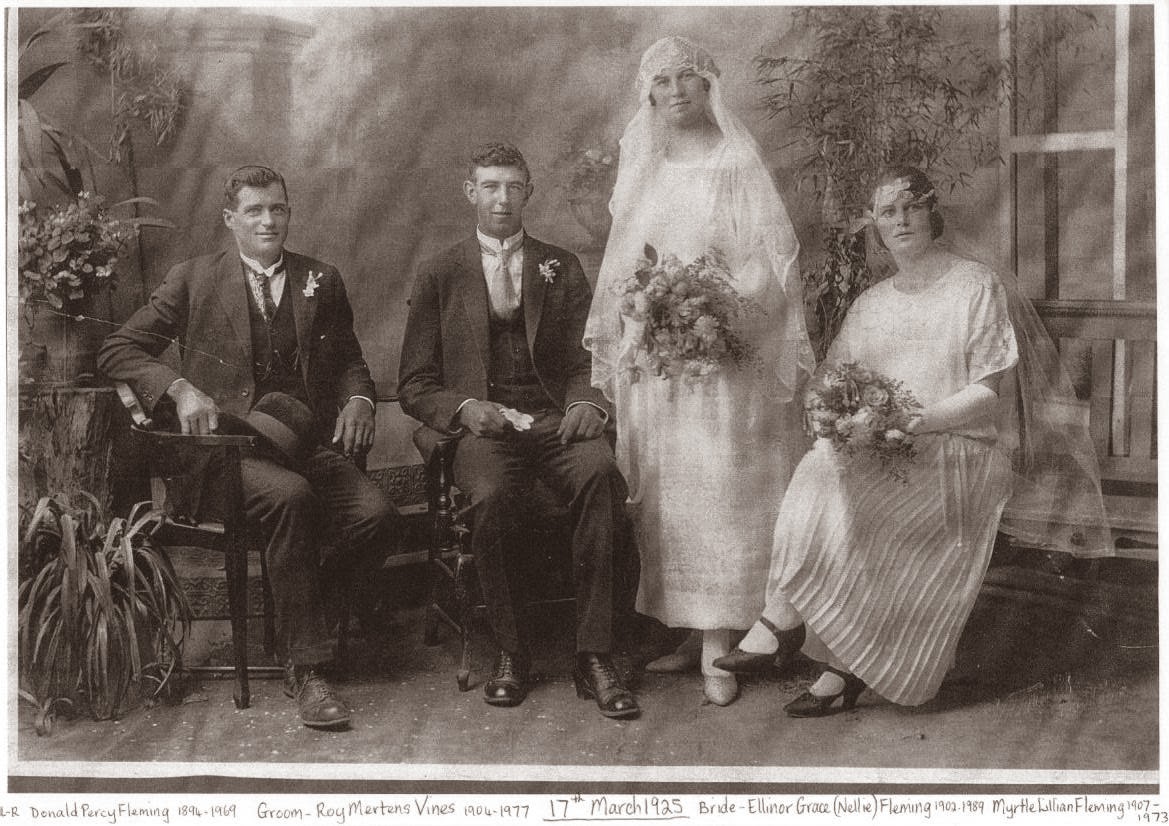 The Wangaratta Despatch, Wednesday, March 18, 1925 - Wedding - Vines - Fleming
~~~~~~~~~~~~~~~~~~~~~~~~~~~~~~~~~~~~~~~~~~~~~~~~~~~~~~~~~~
The marriage of Miss Eleanor Grace Fleming, fifth daughter of Mrs. D. Fleming "Valley View", King Valley and the late Donald Fleming, and Mr. Roy Merten Vines, youngest son of Mr. F. Vines, Dean St. Albury, was celebrated at Holy Trinity Cathedral by Rev. E.A. Hunt yesterday.  The bride who was given away by her brother-in-law, wore a pretty wedding frock of broche satin mesoline caught at the side with a spray of orange blossoms.  Her veil was lent by Mrs. Canterbury, St. Kilda (cousin of the bridegroom) and she carried a bouquet of asters, roses and maiden hair fern.  Miss L. M. Fleming, sister of the bride, who was bridesmaid, wore powder blue crepe de chine, and her blue tulle veil hung from a silver bandeux.  Her bouquet was of roses and asters.  Mr. D. Fleming, brother of the bride was best man.  The party were photographed at Vine's studio, and afterwards partook of wedding breakfast, served at the bull's Head Hotel.  Mr. Prest, cousin of the bride, presided, and the customary toast list was honoured.  The bride travelled in a navy costume and hat en suite.  The honeymoon will be spent in Sydney, and the future home of Mr. and Mrs. Vines will be at Albury.
By Kerryn Taylor - March 19, 2014