Today I found the answer to another question but raised more.
Isn't that the way genealogy always works! 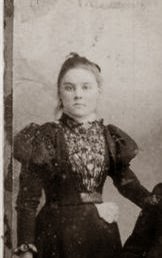 My great great grandfather's sister was Helen Gordon Forsyth born on January 5th 1859.  Helen died of Phthisis (pulmonary tuberculosis or a similar progressive wasting disease.) on the 11th of November 1897 at Mill Terrace of Sandhaven, Pitsligo, Aberdeenshire, Scotland.
Helen had had a relationship with a James Wood.
Together they had a daughter, Helen Thomson Forsyth who was born on the 17th of January 1882 at Tyrie, Aberdeenshire.

In the 1891 and 1901 census young Helen Thomson Forsyth was living with her maternal grandmother, yet another Helen Forsyth, at Shore Street, Pitsligo.

We're not sure what happened to James Wood but in 1885 Helen Gordon Forsyth married a mason named Thomas Burnett.  They went on to have four children together.  Thomas pre-deceased Helen in 1892.

Helen Gordon Forsyth's nephew Patrick and his wife Dorothy have been an amazing and invaluable source in our family research.   Dorothy had sent me this postcard/photo 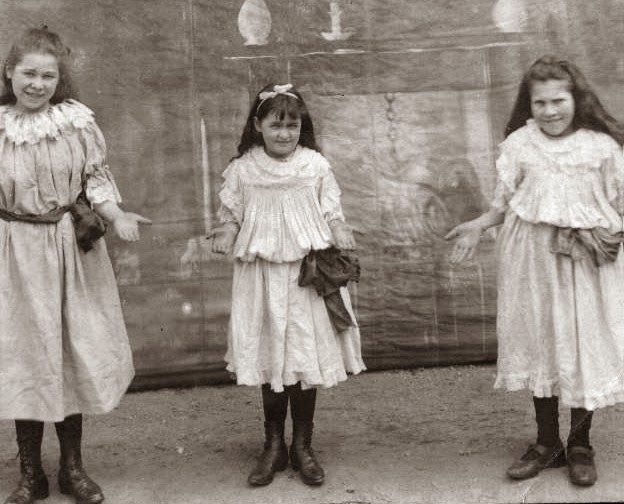 On the back was a letter dated Jun 1906 to Helen Forsyth at Eddle House, Sandhaven, by Fraserburgh,  from her sister Bella. 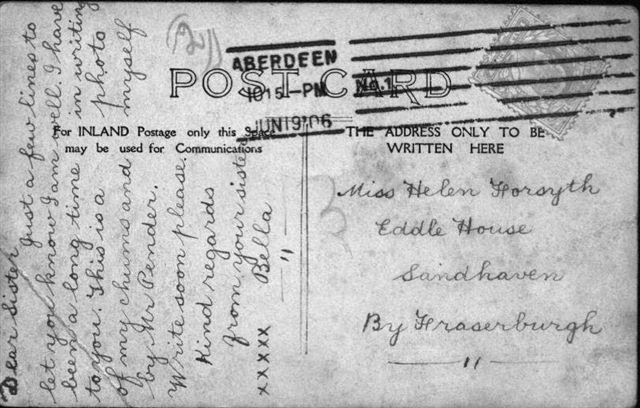 The letter says:  "Dear Sister,  just a few lines to let you know I am well.  I have been a long time in writing to you.  This is a photo of my chums and myself by Mr. Pender.
Write soon please.
Kind regards from your sister Bella xxxxx

So one of the girls in the photo is Isabella Burnett.  I wondered where she would have been living in 1906 as her parents had both died.  I thought Mr Pender may give me a clue.  Sure enough I found Isabella Burnett aged eleven years in 1901 census at a boarding house at 37 Belmont Street, Aberdeen South with an Alexander Pender the headmaster and his wife Matron.

A Google search revealed that Mr Pender, (who wore long johns under his kilt!  see photo and story here ) was the headmaster for the Aberdeen Institution for the Education of the deaf and dumb.
So Bella must have been deaf.  She died in 1914 at the young age of 24.  I have added her death certificate to my "to do" list.

Her sister and brother, Annie and Alexander Burnett both migrated to Canada.

Below is a photo of Alexander in uniform.  Another thing on the "to do" list is to find his military details.

From this photo and the one of the three girls, which girl do you think his sister Bella would be?