My childhood memories of perhaps my only visit to my grandmother's brother's house were that Uncle Frank had red hair and Auntie Dot had bright red lipstick! 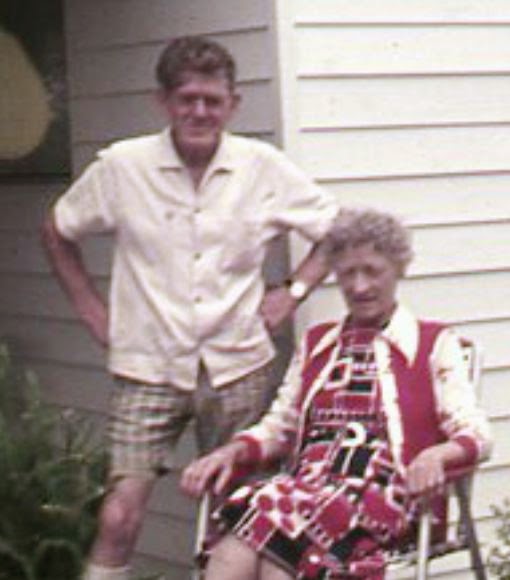 Francis Edward Adams who for some reason later called himself Frank Francis Adams was my paternal grandmother's youngest brother.  He was born on the 12th of July 1906 at Kensington, a suburb of Melbourne, Victoria.  The son of Mary Agnes Adams nee Morgan and her husband John Adams who had separated and went through a lengthy maintenance battle in court ... read here >

I remember being told that Uncle Frank and Auntie Dot weren't married.  Not sure why I was told that.  Uncle Frank was quite a small man and apparently had been a groom and a jockey.  Dad said he used to work on the De Havilland aeroplanes made for the airforce because he was small enough to crawl through the cramped spaces.

When I started researching my Adams family I was told that the family story was that Uncle Frank was batman for General Thomas Blamey in World War 2.

I searched but found nothing that corroborated that story.  I did find some very surprising facts though.  Talk about a tight lipped lot!

I looked up Uncle Frank's war service details and found that he enlisted on the 15th of June 1940.  He was single, a groom (strapper) and listed next of kin as his sister Mrs Catherine Goodwin of Darnum.  Aunty Kit and Uncle Willie (as I knew them) lived at Darnum in Gippsland all their married lives.  Frank's address at the time was 155 Epsom Road, Ascot Vale. 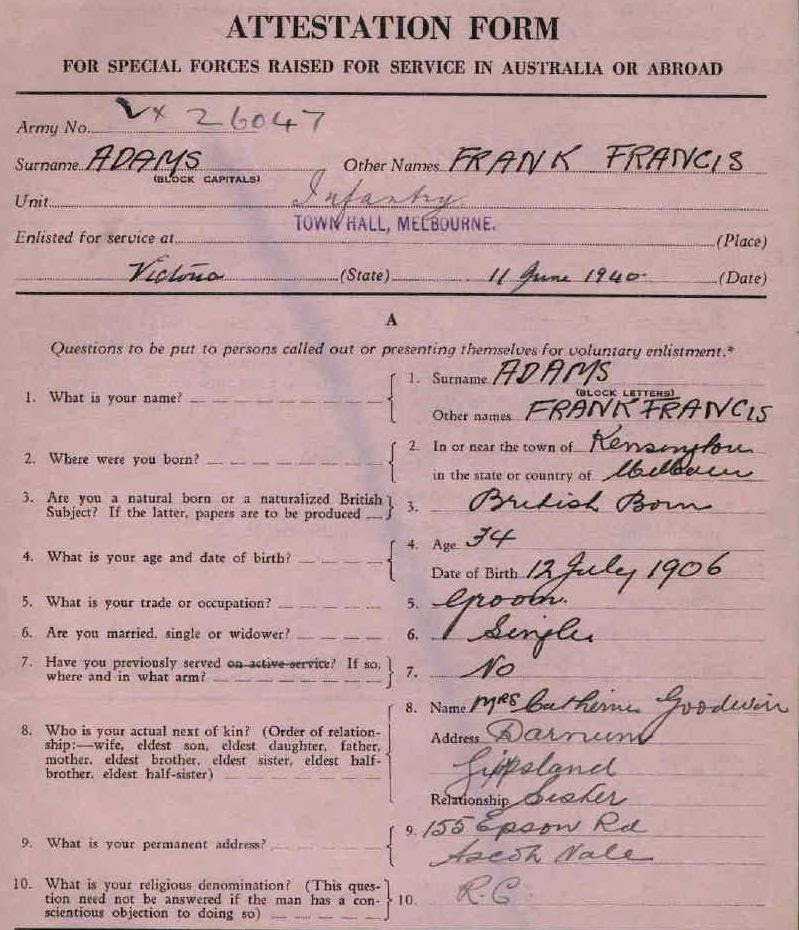 He was recruited to the 8th Division petrol company and then in August 1940 was detached to the G.M.H school of fitters mechanics.  He was discharged by the 23rd of October 1940 as "medically unfit for service, not occasioned by his own default".  Quite a short stint of only four  months.  I thought that was it but no ......

I don't know why I revisited the World War 2 army records but one day I stumbled quite by accident on another war service record for a Frank Francis Adams with the same birthdate.
World War 1 war service records are available openly but World War 2 records need to be purchased.  So I paid the fee and after a short wait the records were opened to me.  Well what a surprise.

Uncle Frank Francis Adams had re-enlisted on the 19th of October 1942 at Paramatta, in New South Wales. His second service records were rather confusing.

This time his attestation paper named his next of kin as his wife, Florence Adams of 20 Claude St, Northcote and his occupation was cabinetmaker.   It also listed his previous service and his sister's address.  So it was definitely the same Frank Adams.  How strange. 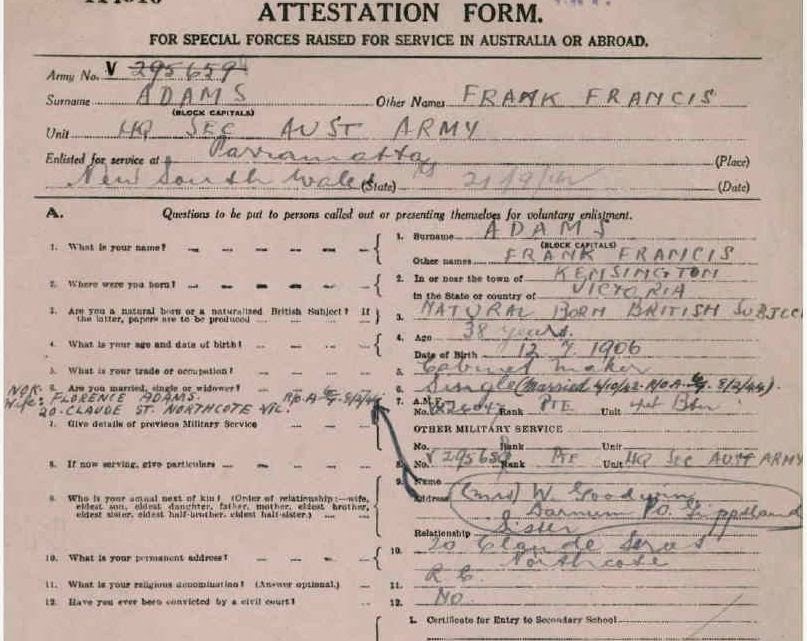 He was posted to HQ 2 Aust. Army.  Maybe this was where General Blamey came in to it but I still found no mention of him.
In March 1944 it seems Frank was transferred from HQ 2 to another area which was 3 A.T.T.D .  He was a student at 3 Australian Army Trades Training Depot (staff) whatever (staff) meant.  His service records contained a student report for this section.
Uncle Frank didn't do well at carpentry apparently and failed to qualify. 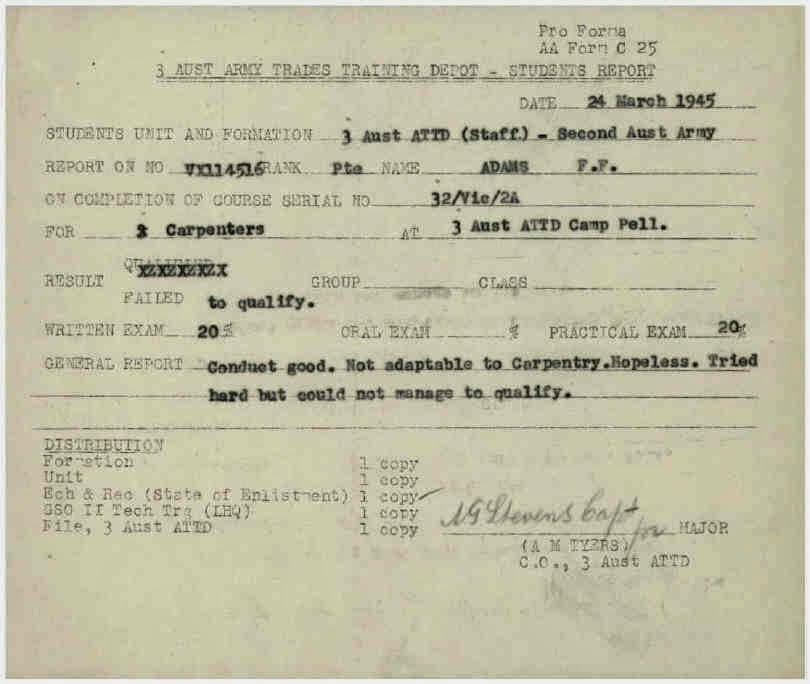 I emailed Dad's cousin's wife who had started on this family history and she was gobsmacked.  No one had ever mentioned Frank was married.  I doubt they even knew either that or they just never spoke about it which fits with the way the family was.
She did say there was a few pieces of furniture in Aunty Kit's house that were said to have been made by Uncle Frank but they were very nicely made and valued by the family, so his work must have improved.
Well my next step was to find a marriage certificate.  There was one.

On the 2nd of October, 1942 Frank Francis Adams had married a Florence Francis.  She was a widow, born in Middlesex, England, the daughter of John Woods and Florence Gay.  She had three children and was ten years older than Frank.
All I could think of was to look in ancestry.com for a Florence Woods married to someone Francis.  I found a tree with them in it and it showed that Ralph Russell Francis had died in 1925 leaving Florence with three children.  I sent a message to the tree owner who was also amazed.  He lived in England and was connected to Ralph Francis.  He had traced him to Melbourne Ports working on the docks but had no further details.  He did give me the email address of a lady who was connected to Florence though.   She was also surprised by my message.  She said it was known that Florence had remarried but not who he was.  Apparently they were friends and as Florence was a widow and Frank re-enlisted, he put her as next of kin so if anything happened to him she would receive his war pension.

What a gesture by a very kind man.  Frank was discharged on the 30th of October 1945 and I couldn't find him again for sure in the electoral rolls until 1963 at 3 Hobson Street, Altona with a Dorothy May Adams.  Aunty Dot.  From 1977 he was with Dot living at 3 Prismall Street, Altona. (pictured below) 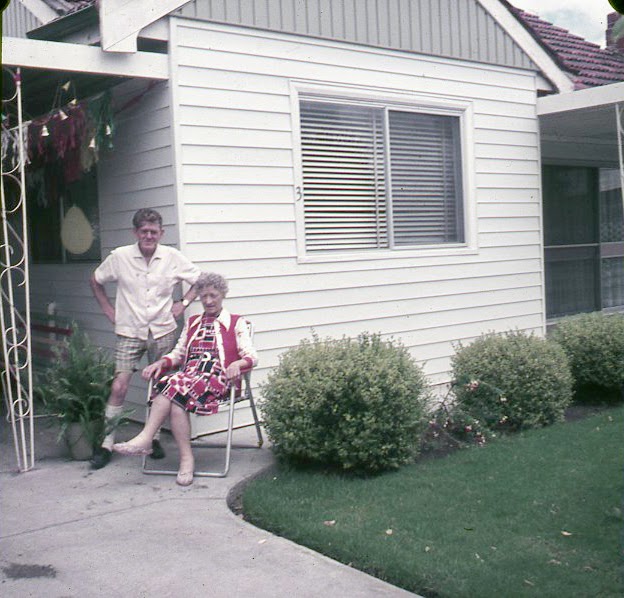 Frank died on the 17th of February 1979.
When I obtained his death certificate the informant was Dorothy May Adams, friend, living at the same address.  So he had never divorced Florence who had continued to live at 20 Claude Street Northcote and who died in 1976.

I could never find anything concrete on Frank being batman for General Blamey and I would love to find out if Aunty Dot - Dorothy May Adams, had other family.  All I know about her is her name and that she was still listed at 3 Prismall Street in the 1980 electoral roll.