I was going to write about my husband's ancestors the Young family but I haven't done a lot of research on them yet and I have been enthralled lately with my current project about a family connection, I have only just found, to Yarram in South Gippsland, Victoria.


This connection is still quite confusing and may take a bit of unraveling yet.

A brief rundown so far:-

My great great grandmother was Margaret "Alice" Kelly.
One of her brother's, John Kelly, brought their two younger brothers to Alice in Melbourne just before her wedding to John Morgan in 1858.

I knew John went to Gippsland as he married Mary Ann Francis at Tarraville in 1869.  Tarraville, Yarram and Alberton are all close by one another.

In searching Trove I found quite a few references to a John Kelly but there may well have been more than one living in the area.
Yet to be sorted.

I sent a query to the rootsweb Gippsland mailing list and learned that there is a book called  "Clonmel to Federation: a Guide to People in the Port Albert area 1841-1901". compiled by Gwen O'Callaghan at the Gippsland Regional Maritime Museum which contains quite a bit more about the Francis and Lawler families.  I have yet to get access to the book but Gwen did give me a couple of snippets and one little piece of information which grabbed my attention immediately.  Elizabeth Lawler was a much loved nurse who delivered thousands of babies at Yarram for many years.  She was known as Bessie.

A few months ago I received copies of a batch of photos from descendants of John Kelly's nephew, Alexander Morgan, who went to New Zealand.
One of these photos was of two young ladies.
Written on the base of the photo was "Miss Bessie and Miss Kate" but none of the descendants knew who they were.
I believe they could well be Elizabeth and Catherine Lawler. 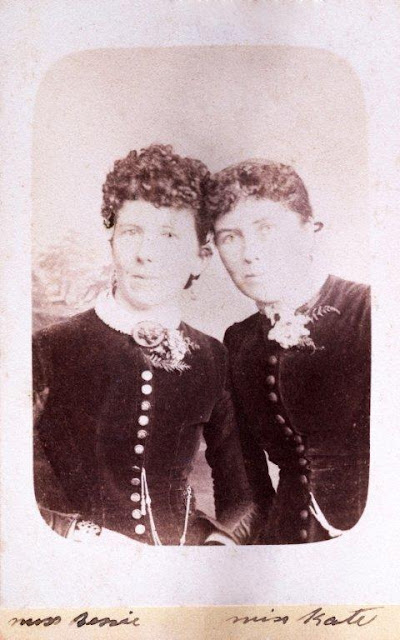 One of the witnesses at the marriage of John Kelly's niece, my great grandmother Mary Morgan, in 1887 was a miss Lawler but the first name isn't very legible. I don't know yet if she is of the same Lawler family.  Bessie Lawler was known to be in Melbourne doing her nursing training around 1889.


I'm still searching, sorting and wondering but perhaps one day I will find enough confirming detail that all these pieces will fit together.