In the Gippsland Times on the 26 February, 1870 there was further mention of the saga of the letter written to another Gippsland newspaper by "Humanity"

Also highlighted are mentions of the fact that John Kelly's child had died.
I feel this would be his first born son, John Kelly born 1869 at Alberton.
I found a birth registration # 19875 but no death registration as yet.

The digitised article is quite hard to read in places so I have copied the transcript below. 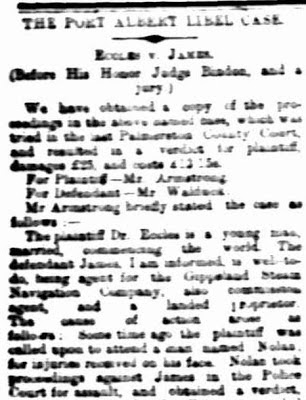 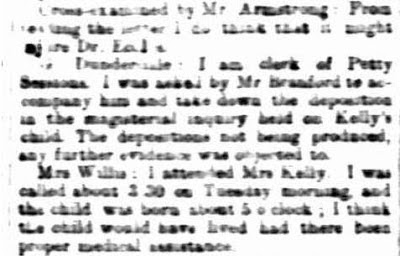 Cross examined br Mr Armstrong: From ?? the letter I do think that it might injure Dr Eccles               ?? ?? I am a clerk of Petty Sessions.
I was asked by Mr Branford to accompany him and take down the deposition in the magisterial inquiry held on Kelly's child. The depositions not being produced, any further evidence was objected to.
Mrs Willis: I attended Mrs Kelly. I was called about 3.30 on Tuesday morning and the child was born about 5 o clock; I think the child would have lived had there been proper medical assistance.

Thomas Burrows: I know nothing about the case, I never heard the doctor say anything against James.               Mr. Waldock, for the defense, stated that he based his defence upon one of the three following statements:-
1st - That there was no libel
2nd - That the alleged libel is true in substance.
3rd - Justification
If you gentlemen consider I have upheld any of these statements, I am entitled to a verdict.
The defendant in this case, it is true, wrote the letter complained of, under the most trying circumstances. And I am sure if any of you were placed in the same position your conduct might have been very similar. The only thing I could say about the letter is that it was a very injudicious one - but one of very great public import, as Dr Eccles being the only medical man in the district was required by James to attend his child, and was absent, and consequently, James thinking that the matter being public, he was perfectly entitled to complain of Dr Eccles conduct. I have also proved that by the statements made by the different witnesses, who stated that it was written for the purpose of contradicting the effect of the report as sent to the government by Dr. Eccles; under these circumstances there is, I think, no malice intended. I would ask you to lay aside all out-door talk, and bring your decision in as simply according to the evidence, and from which I think you will agree that I am entitled to a verdict.
The Judge, in summing up, stated that he would follow the practice usually adopted by the English Judges, and leave it to the jury. The law of libel is quite different, especially with regard to a professional man;  if they considered that this letter was written even for the purpose of injuring Dr. Eccles, although it may not have done so, he is entitled to a verdict.
Damages £25; costs, £13 15s.