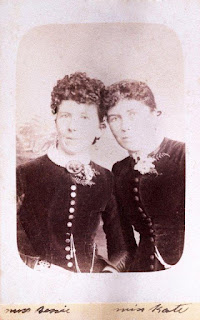 I wrote in my previous post Y is for .... Yarram that I had received a copy of this photo from New Zealand of two girls named Miss Bessie and Miss Kate.  No one knew who they were though.  It was at first thought that one of the names was Annie but too many opinions were definite that it said Bessie.

Recently I made contact with Kim who sent me some information about the families at Yarram which had been researched by her grandmother over the years.

Woohoo this information confirmed my theory!  The girls in the picture were in fact Elizabeth Ann (known as Bessie) and Catherine (known as Kate) Lawler.

The witness at Mary Morgan's wedding (left) show Bessie Lawler's signature in 1887 with a bit of a fancy tail on the first S, (perhaps a medial S as in old fashioned writing) and below at the wedding of Alice in 1900.  Only a small difference in the signature after thirteen years.

Alice's mother was Mary Ann Kelly nee Francis.  She was the daughter of Mary Kilroy and Thomas Francis. When Thomas died Mary Kilroy remarried Fenton Lawler (often spelt Lalor).  Elizabeth Ann and Catherine aka Bessie and Kate were their daughters; so half sisters of Mary Ann Francis.

Bessie started at Melbourne University in 1889 to study nursing.  She went on to become a much loved nurse in Yarram, conducting the Kilroy Private Hospital on the corner of Station and Rodgers Street.  The original building is now a private residence.
By Kerryn Taylor - November 05, 2012