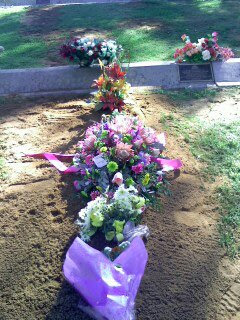 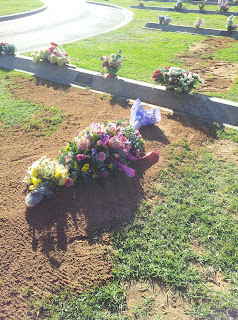 My Sunday's Obituary post today is for my own dearly loved Mum
who passed away last Monday the 23 of April.  She was laid
to rest with a beautiful graveside service on Friday the 27th of April at Pine Lodge Lawn
Cemetery, Northern Victoria.

The third of Daisy and Archie Fleming’s four children, Amelia Joan was born at Wangaratta on 5th September, 1937; her siblings are Ken, Margaret and Elaine.

Joan was brought up in North East Victoria. The family moved around a lot for work.
Joan left Rochester High School at about fourteen years of age, and worked in grocery stores in Wangaratta and then Shepparton.

Through friends, Joan met Kerry Forsyth in 1957 and they married at the Church of England in Mooroopna in 1958.  Joan looked after the home and their two children - Kerryn who was born in 1958 and Ross who arrived two years later in 1960.
Once the children were attending school, Joan worked as a kindergarten assistant at St David’s Kindergarten in Shepparton.
Later on, Joan and Kerry were divorced. 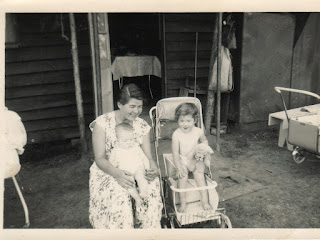 While attending a country music club meeting in 1975, Joan met Bud Oster and they married on 1st December, 1981 at Mount Major.  They lived in Shepparton and Joan continued to work for the Yakka clothing company for a while, then later in food services at the Mooroopna Hospital, until it closed. 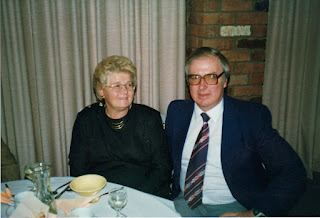 Bud and Joan bought the General Store at Dookie in 1990, where they worked for five years. After they sold the business they continued to live at Dookie for another five years. Bud went back to his previous occupation in automotive spare parts sales … and Joan retired.
When Bud had his annual holidays they used to enjoy exploring Australia.

Until recently Joan loved working as a volunteer at the Revamp Op Shop in Fryers Street, Shepparton.

In her younger years Joan played tennis, and later she took up bowls, playing first for East Shepparton and then Dookie.
She loved gardening, roses being one of her favourite flowers, and she also grew vegetables.  She enjoyed crosswords, word puzzles, scrabble, card games such as euchre, five hundred and canasta … and Joan was also an avid reader of crime stories.
She enjoyed most genres of music, but particularly loved country music, and some of her favourite singers were Rod Stewart, Roy Orbison, Jimmy Barnes, Neil Diamond … and the list goes on.

In the last five years or so, Joan has contended with ill-health, and so she and Bud moved to Rodney Park eight months ago.  Joan suffered pneumonia and some heart failure last Christmas and she was admitted to GV Base Hospital for a time, before returning home.
On Wednesday 18th April Joan was re-admitted to GV Base after a cardiac arrest.  Joan died there on Monday 23rd April 2012 with family by her side.

A very caring, sometimes stubborn, always generous person, with a good sense of humour, Joan was very protective of her family and was a loving wife, mother, grand-mother and great-grand-mother.

She leaves two great-grand-children - Khaylen and Nevaeh and would have dearly loved to have met her treasured, soon-to-be-born, great grandchild.

Joan is survived by her three siblings - Ken, Margaret and Elaine.


My beloved mum is now reunited with her own beloved mum.  We love you Mum and Nanna.