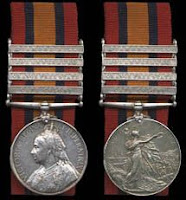 Ten contingents of New Zealand soldiers participated in the Boer War and they all received the Queens South Africa medal pictured right.

John Forsyth was the much loved grand-dad of Anne-maree Osborne and Margaret Tyson nee Forsyth and their brothers David, Mark and Michael.  He was my great grand Uncle but I never had the privilege of meeting him.
Anne-maree and I have had lots of fun over the last ten years extensively researching our Forsyth ancestors.

John Forsyth was born on the 10th of May 1879 at Rhodes Swamp, Christchurch, New Zealand, third son of Robert Forsyth and Jessie nee Farquhar.  He married Melva Carleton Watson on the 7th of February 1929 at the Methodist Church in Morrinsville, New Zealand.
He married later in life as he was busy fighting for the Empire in both the Boer War in South Africa and WW1.

John is listed as John "Forsythe" in the Auckland War Memorial Cenotaph database, we're not sure why an 'e' was tacked on.  Perhaps at some stage a full stop was written at the end of Forsyth and it looked like an 'e'. 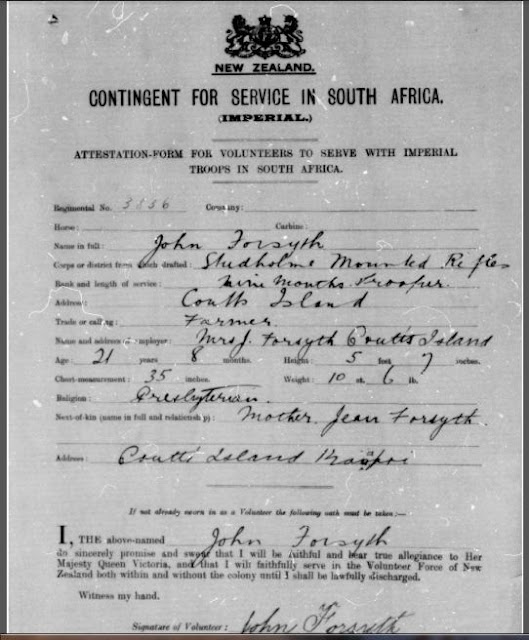 Trooper John Forsyth 3836, enlisted in the 6th New Zealand Contingent, known as the "Silent Sixtth", on the 18th of January 1901 at Wellington.

His attestation paper shows that he was drafted from the Studholme Mounted Rifles with whom he had been a Trooper for nine months.  At that time he was a farmer, 21 years and 8 months of age, living at Coutts Island, Kaiapoi. He was five foot seven inches tall, had a chest measurement of thirty-five inches and weighed 10 stone six pounds.
He listed his mother Jessie (also known as Jean) as his next of kin.

The sixth contingent embarked on the SS "Cornwall" on the 30th of January 1901 and arrived in South Africa in March 1901.  Below is a newspaper article about the Cornwall's departure.
Queen Victoria had died at Osborne House, Isle of Wight, on the 22nd of January so in deference to this the SS Cornwall sailed with no demonstration at the send off.

Click here to read the rest of the article

In a letter from Pietersburg, dated April 10, James Robertson, writes to his parents at New Brighton with an account of the sixth contingent's experiences.
This was published in the newspaper on the 27th of June 1901.

Read the rest of the News article here


Following are some links to sixth contingent photos at New Zealand history online:

Members of the Sixth Contingent which left for South Africa in January 1901.

A cold night's sleep: members of New Zealand's Sixth Contingent sleeping out on theveldt (open plains) in South Africa, circa 1901.

New Zealand troopers from the Sixth Contingent move across open plains in South Africa, 1901. This photograph was possibly taken by Private William Raynes, a Waikato farmer serving with No. 16 Company. 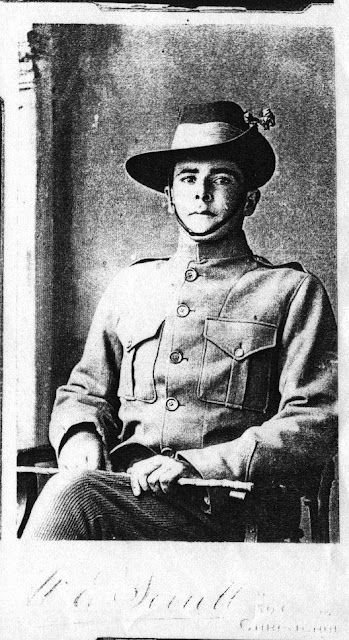