In about 1891 he wrote a very interesting small book  called “A sketch of Life - A Settler's 35 years experience in Victoria, Australia".

It was an account of his emigration from England and his experiences in Australia.
Below is a couple of excerpts. 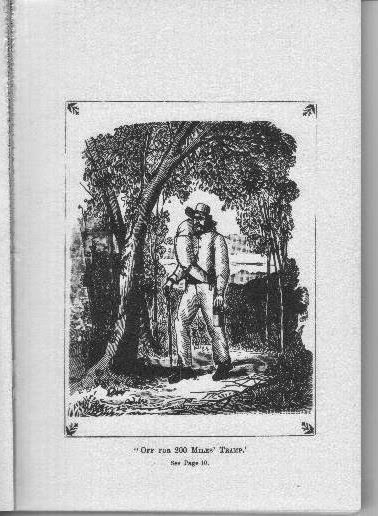 In giving this little “Life Sketch,” I am actuated by a desire to assist many, not only hard-handed men in the “Old Country,” but many soft-handed ones also, as I was, and especially those who have large families, as I had, and who are struggling for a living, and see but little hope for the future in the already over-crowded hive in the “Old Land,” and a still poorer prospect for the new swarms; I, therefore, think a little advice and encouragement to those desirous to “cast off,” from one who has been through it all, will be welcomed by many, ------ E.H.

SKETCH OF MY ARTIST LIFE

When living in the, Old Land," over 35 years since, I belonged to a class of which there are many thousands _ a struggling professor and of the class I have designated as “ soft_handed." I was an artist by profession; studied from a child; never did anything else; and in I850 and I85I had so far advanced in my profession to have the honour of having my works hung in a creditable position on the walls of the Royal Academy of Arts, of which I was also a student.
I married rather young (at 25), and soon had little ones running round. I started fairly well in the neighbourhood of London, at Clapham, adding teaching. Just about this time (.I8I7) artists were invited by the Government to send in Specimens of their works for exhibition in Westminster Hall, for competition for the decoration of the new Houses of Parliament, then just finished. I was rather too young and inexperienced an artist for so great and honoured an undertaking; however, I thought I would venture. I got my large picture. finished, but from over_study, excitement, and anxiety, my health gave way. I contracted nervous typhus fever, and consequently could not finish the other one, which was required by the Commissioners to enable me to Compete. But Sir Chas. Eastlake, the President, whose letter I still have, said my painting _ under the section of “Scriptural Allegory," subject, “The King of Kings and. Lord of Lords "_ though not entitled to compete, could, if I liked, be hung in the vestibule of the hall; which was an honour I gladly consented to.

On getting up from my long and dangerous illness, my medical advisors persuaded me to go to a milder climate for perfect restoration, and to give up my profession for a time, at least to do very little painting. South Devonshire was recommended. We therefore left our home at Clapham, and took up our residence about four miles from that lovely spot, Torquay. To our residence was attached a small farm and splendid orchard. In this beautiful climate I soon regained my strength. I did all sorts of labour on the farm, so that I got a general insight into all sorts of farming work. This I found exceedingly useful since taking to farming in Australia.

I found many kind friends in Devonshire. (I cannot help naming the Savile family. God bless them for their kind patronage and introduction in my profession!) We resided in Devonshire about four years. We then came again to London, but found a difficulty in looking up a connection again, had to fill up my time in decorating in the various courts of the Crystal Palace, at Sydenham, just then being erected. I however, saw but little prospect of advancing in my profession, or even making a living, and less prospect for a large and increasing family, we having by this time seven children, six boys and one baby girl, besides I had contracted a great taste for rural life while in Devonshire. We were determined therefore to depart for Australia, the land of gold.

The goldfields being at that time in full swing. A wide field indeed for enterprise, and anticipated prosperity, with God's blessing, for, I am happy to say, I had long sought His grace and guidance, and committed my ways unto him, and was sure He would guide our steps.

In the first place, I applied to the Commissioners of Emigration for a situation as schoolmaster for the voyage, on a Government emigration ship, my wife to act as matron. I presented letters of recommendation, one from the Bishop of London (Blomfield). I was well known to him, as Fulham, near London, where he resided, was my native place. The commissioners said my letters were more than enough, but desired to know the number of children I had. On hearing the number they informed me that they regretted to say that, according to to their regulations, this would be a bar to my appointment. Three I think was the number allowed.

This was a great blow to us, as we should have saved our passage money, and had a salary besides. I think about I50 pound as schoolmaster, and wife as matron. Parties told me I could have managed it if I had liked, by getting some of the passengers to take the other four children, but this I could not do from principle. To pay our passage in a general passage ship, therefore, exhausted all our little means.

We did intend taking our passage in the new ship "Schomberg" just launched, owned by the "White Star Company". On enquiring at the London office, they informed me that I could send our goods on at Liverpool, but they would not be put on any ship until our passage money was paid, and that I could find them in the company warehouse at Liverpool, consequently, I sent the goods on. We could not however get ready to go by  the "Schomberg". On arrival at Liverpool, and enquiring for our luggage, I found it had been sent on in that vessel.

Now the fate of that fine new ship, I presume is generally known. The captain had a bet with the captain of the ship "Kent", a well known clipper, and declared "if he did not beat the "Kent" he would knock the "Schombergs" bows in". On hearing that the "Kent" had made the passage before him, the "Schomberg" was wilfully run on shore just a little way from Cape Otway. Luckily it was fair weather and the passengers and crew were taken off, but with only the luggage they could carry in their hands, there being only just standing room on board the rescuing steamboat. The "Schomberg" became a total wreck.

This I suppose, is one of the most wicked and shameful incidents that ever happened on the shores of Australia. We took our passage in the next ship, the good ship "SULTANA" from Liverpool, on the 2Ist October, I855.

I remember, as we weighed anchor, being some distance out in the stream, and out of hearing of any friendly cheer, a serious calm appeared to pervade the ship, all appeared absorbed with their own thoughts, when we found the ship was under way, more by the apparent moving of the receding shore, she being a sailing vessel. I dont know the feelings of the other passengers, possibly many were like our own, at departing from the good 'Old Land'. Hitherto, we had borne up well in parting from kindred and friends. We said 'Good Bye' in London, but now, in those few calm moments, seated upon the ships deck, with wife, six sons, and a baby girl around us, we felt the necessity of faith in that good Providence on Whom we had cast the future. Our feelings, however, would have vent in a few hot tears, but these had to be brushed quickly on one side.

I do not think it necessary in this little sketch to give a long account of our voyage, or the various incidents that happened. There was nothing very sensational, our worst experience was our first night out. The ship was so crowded that there were not berths enough, and, as we came late on board, ours had to be erected, so that we had to huddle down between decks, as best we could. The children being our great care, there was no rest for wife or self. We had fearful weather in the channel, and everything being loose on board, the din was fearful, the heavy iron cable on deck rolling from side to side, and the ships bell tolling at every roll of the ship, and the carpenters working all night fitting up berths, and the state of the passengers...one can guess the confusion!

And what added to it more...just as we reached the most dangerous part of the channel, off the coast of Ireland, the tug-hawser parted but, when pulled on board, it evidently had been cut adrift with an axe, a most shameful act. The contract was to take us clear of the channel. this then made further trouble, as all hands had now to set to and work the ship, and there was great danger in working her out of the difficult position she was left in, and anxiously did all wait for the morning.

It may be imagined that the whole of the voyage was no pleasure trip for wife or self, in a crowded ship, and seven children (under I2 years of age) to look after. Neither do I think the children liked it, they were too young, and they did not thrive at all on the rough ships fare, particularly the hard ships biscuits...they could not manage them at all. After a time, though we got on better, I had a carpenters plane with my goods, and we shaved the biscuits down on that, and made it into puddings, and so managed to get rid of them in this way. The plane went the round of the ship after this, particularly among the old people. We had however, on arriving in Melbourne, an American cask full, unconsumed, these we took ashore with us, and they went fine in soups etc with good Australian beef
at 3d a pound.