Further on my theory that Felix Morgan is the brother of my great-great-grandfather, John Morgan, DNA results do support this and also the fact that Felix's wife Mary, "Mrs Mary Morgan of Flinders Lane, sister-in-law," sponsored the migration to Australia in 1855 of Felix's sisters Margaret and Bridget on the ship Calliance.  My great-great-grandfather John was also on the Calliance.

With help from Mary Ellen's great-grandson, Dr Philip Morgan who is a DNA connection with my family and many Morgan cousins I have done some further research on Felix and Mary Morgan's children, who would have been my great-grandmother's first cousins.

Alexander died not long after his birth in Ireland in 1853.

Agnes Ann was born in Richmond, Victoria in 1854 after Felix and Mary arrived in Australia.  Agnes Ann died a Morgan in 1895 at the Prince Alfred Hospital, so never married.

About the 4th of January 1863, Mary gave birth to twin daughters Mary and Ellen.

Mary died in Hosier Lane off Flinders Lane in Melbourne on the 18th of January at only 2 weeks of age. The cause of death was debility, born a twin and very weak from birth. Marasmus certified by L Martin

Ellen died on the 7th of  March in 1863 Off Flinders Lane East Melbourne.  Cause of death Marasmus, convulsions, certified by L Martin.  age 10 weeks.

This may well have been the reason Mary went back to her parents in Ireland.

"Mary Ellen Morgan boarded the Norfolk in June 1864, accompanied by her children Agnes and Thomas.  All ages fit.

Mary must have been pregnant at the time as John Patrick Morgan was born at Carrick-on-Suir Tipperary, Ireland on the 20th of December 1864.

In December 1865 Mary Ellen Morgan disembarked from the Royal Standard with children Agnes, Thomas and an unnamed third child.

Given Mary's straitened circumstances at that time, someone paid her and the children's fare, probably her father who was apparently prosperous and living in Carrickbeg, which is just over the bridge from Carrick on Suir."

Felix and Mary's last son Edward James Morgan was born in Melbourne in 1867 and died in 1957.

John Patrick Morgan went on to marry Mary Ann King at St Patrick's Cathedral in Melbourne on the thirteenth of February 1901. (source - Marriage certificate supplied by their grandson Philip Morgan)
John Patrick and Mary Ann Morgan had three children
Thomas Alexander Morgan, (1901-1959)
Edward James Morgan, (1902-1974)
John Joseph Leo (Jack) Morgan, (Philip's Dad)
Phil's told me that John Patrick was "described as difficult and idiosyncratic (he's been a cobbler and made his own boots, and they were robust and noisy - mum said you could hear him all over backstage when he walked around!).  He was a great union man and dad followed him into both the theatre and the union.
In 1917 John Patrick Morgan was a stagehand in the mechanical department at Melbourne's Theatre Royal and was for many years a Union member on behalf of the theatrical workers.
APPOINTMENT OF A CONCILIATION COMMITTEE IN THE THEATRICAL, MOVING PICTURE AND AMUSEMENT INDUSTRY—THEATRICAL AND AMUSEMENT EMPLOYERS' DISPUTE. (1930, September 25). Commonwealth of Australia Gazette (National : 1901 - 1973), 1892.  http://nla.gov.au/nla.news-article232595276
Argus (Melbourne, Vic. : 1848 - 1957), Tuesday 4 July 1911, page 8
STAGE EMPLOYEES.
The third half-yearly meeting of the Victorian branch of the Theatrical Employees' Association was held on Sunday. Mr. J. P. Morgan (president) occupied the chair.......
http://nla.gov.au/nla.news-article11596826
THEATRICAL WORKERS HEARD (1917, April 12). The Herald (Melbourne, Vic. : 1861 - 1954), p. 12. from http://nla.gov.au/nla.news-article242690119
John Patrick Morgan died at Richmond on the 12th of December 1934.
He was held in high esteem by colleagues. 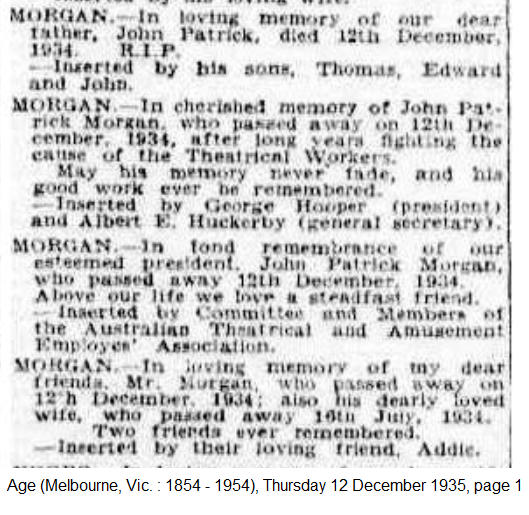 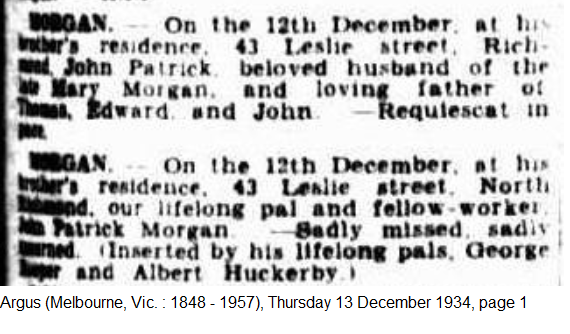 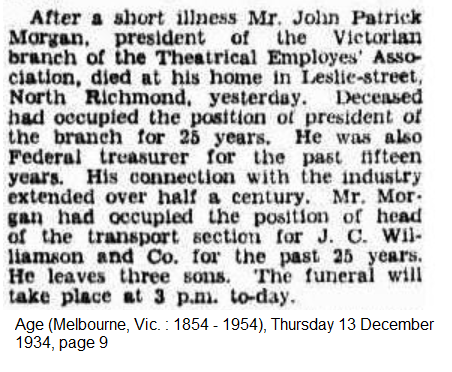 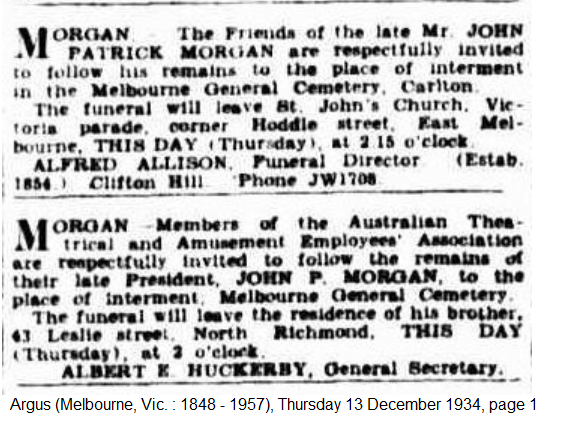 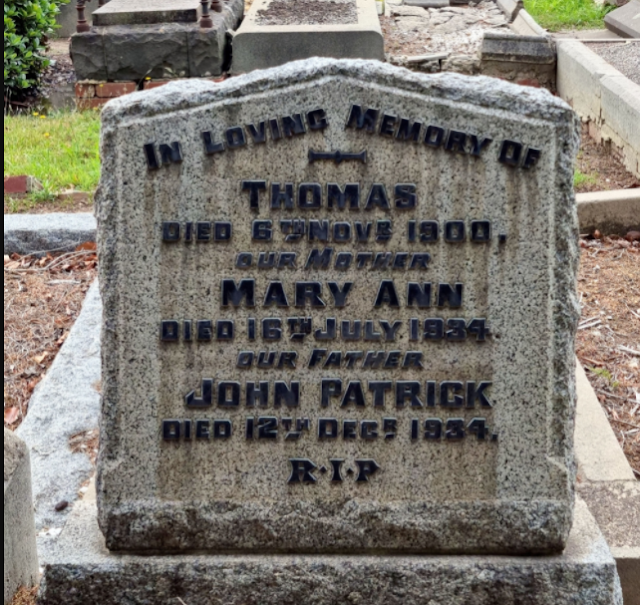