A search in Trove for information about Mary Morgan, wife of my Dad's 2nd Great uncle,  or anyone living in Hosier Lane, Melbourne around 1863 revealed a sad incident to which Mary Morgan, was a witness. 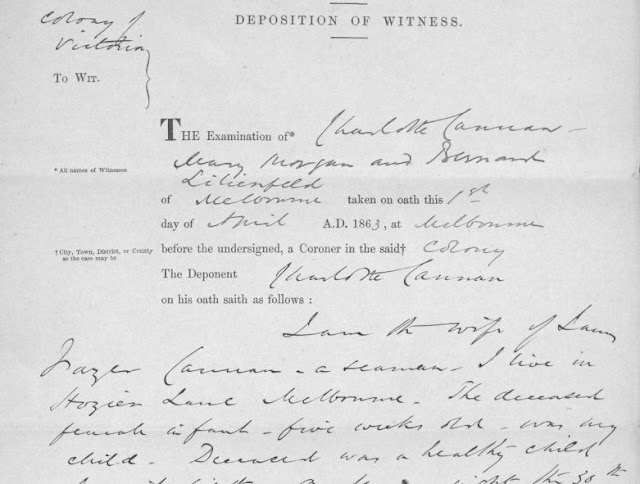 Transcription of above full page
Charlotte Cannon deposed
I am the wife of James Frazer Cannan - a seaman - I live in Hozier Lane Melbourne.  The deceased female infant - five weeks old- was my child.  Deceased was a healthy child from its birth.
On ? night the 30th instant I went to bed at one o'clock taking the deceased with me.  She was quite well at that time.  I gave her the breast and laid her against my arm as usual.  I went to sleep and did not wake again until 7 o'clock yesterday morning when Mrs Morgan knocked at my door and woke me.  As soon as she woke me I found the child dead.  I called out to Mrs Morgan who came into the room and we sent for Dr Lilienfield.  The bedclothes were not over deceased's face when I woke.  She was lying in the same position in which I had placed her.  She was quite cold.
Charlotte Cannan. 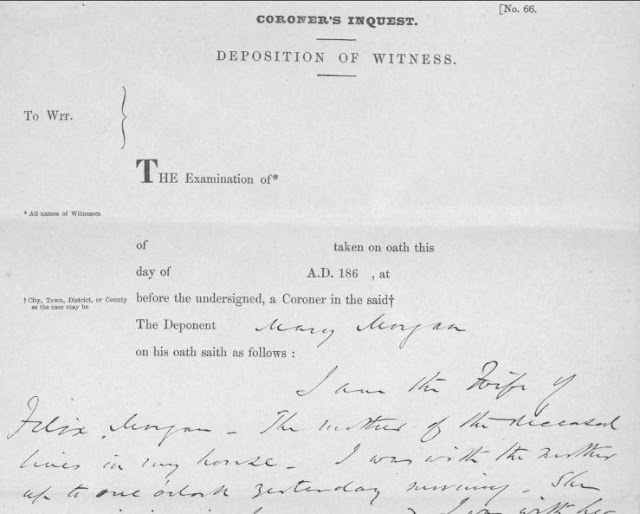 Transcription of above full page

The deponent Mary Morgan on oath saith as follows:

I am the wife of Felix Morgan.  The mother of the deceased lives in my house.

I was with the mother up to one o'clock yesterday morning.  She was sitting in her room and I was with her.

She was working as a tailoress up to that hour.

In the morning at 7 o'clock I called her and almost as soon as I did so she called me into the room and I found the child was dead.  I sent for a doctor.  The mother seemed much distressed at losing the child..

Mrs Cannan had only one glass of beer during the night preceding.  She was perfectly sober when she went to bed.

I have no reason to think that the child's death was from any other cause than an accidental one.