I'm fairly certain that Felix Morgan is a son of Alexander Morgan and Agnes/Ann/Nancy Lennon of Derrynoose, Armagh, Northern Ireland and so a brother to my great-great-grandfather, John Morgan.

We can't find a baptism for him in the Derrynoose, Armagh baptism records.

There are gaps in the records that could account for that.

Felix appears to be a family name passed on through later generations.

For about five and a half years Felix was a member of the Royal Irish Constabulary.

Their records state he was born in Armagh.

Felix married Mary Hayes in Cappawhite Tipperary on the 2nd of May 1852 in the presence of John Douglas and James Brien.

Felix and Mary had eight children:
Alexander, baptised 5th May 1853 Cappawhite Tipperary.
(Ancestry and FindMyPast have transcribed father's name as Robt but it is clearly Felix)

But it looks like things then got a little worse.
I'm told by a descendant that Felix was an alcoholic so perhaps that was the cause of their troubles.

Felix died on the 19th of February 1878 at the Melbourne Hospital.
Cause of death looks like Morbus Brightis.
Brights disease is kidney failure so perhaps it was that due to his alcoholism. 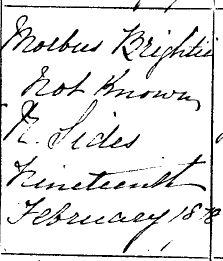 The informant on Felix's death was a hall porter at the hospital so it seems he was estranged from his family.
No family or parents are named on his death certificate only that he was 24 years in Victoria. 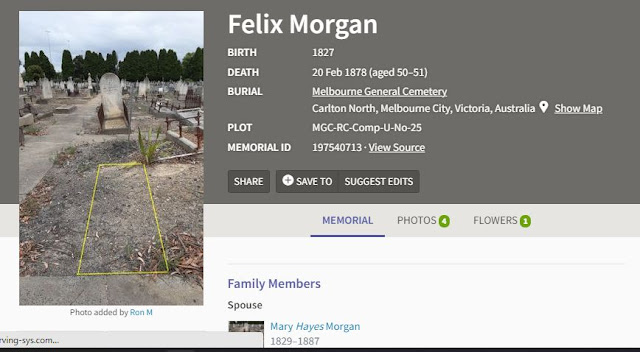 A couple of years ago I requested a photo of where Felix was buried in Findagrave where I am a volunteer and another kind volunteer sent me this.
It appears Mary was also buried there in 1887.

We are now seeking any other descendants of Felix who are open to doing a DNA test to hopefully add more information or clarification to our data.  Any takers out there?