Often I will do a quick search of Trove using names from my family history.  I searched this time using my maternal grandmother's name, Daisy MORGAN. (1908-1998)
Daisy grew up in Moyhu, Victoria. 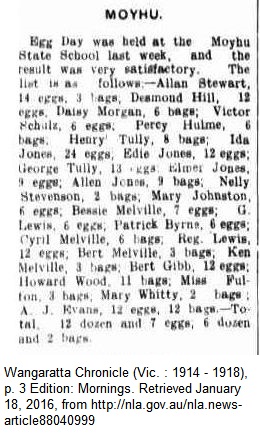 Never having heard of "Egg Day" before I continued with a couple of searches to find an explanation.  It seems to have been a popular form of donating to hospitals.  There are a lot of article in the newspaper archives of Trove about Egg Day but I couldn't find its history or origins. 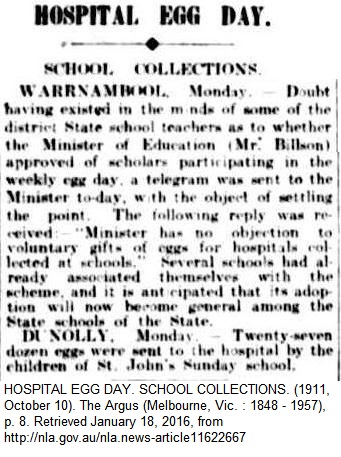 During WW1 a National Egg Collection began in England.  The donated eggs were sent to army hospitals in England, France and Belgium. 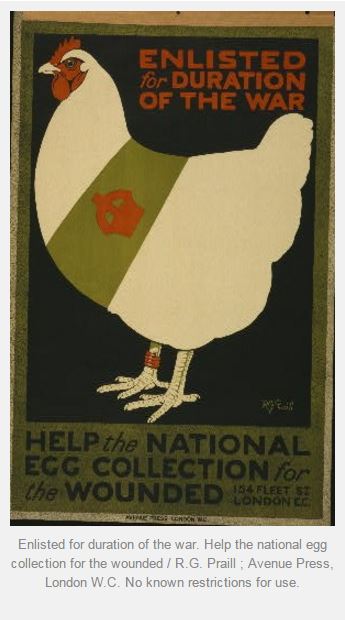 The National Egg Collection for Wounded Soldiers and Sailors 1914-1918

The National Egg Collection was launched in November 1914 following proposals put forward by Frederick Carl, the editor of Poultry World. The aim initially was to provide 20,000 newly-laid eggs a week to the wounded in hospital in Boulogne. However, very soon the organisation began to aim even higher.............. Read more