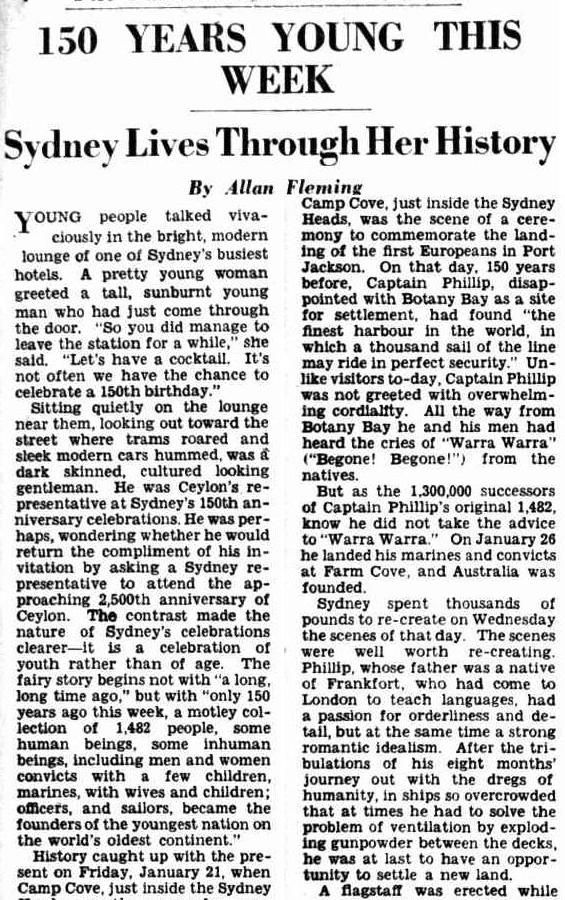 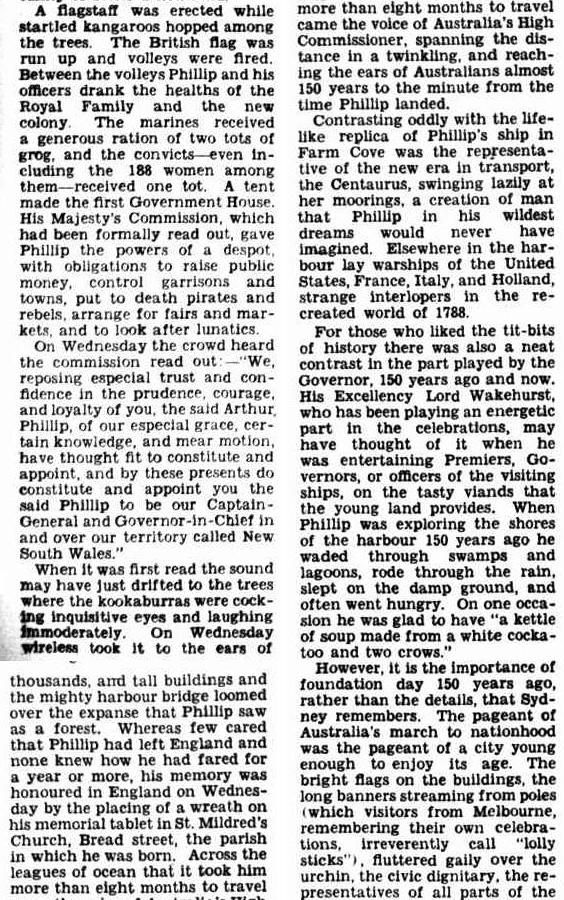 Sydney Lives Through Her History

YOUNG people talked vivaciously in the bright, modern lounge of one of Sydney's busiest hotels. A pretty young woman greeted a tall, sunburnt young man who had just come through the door. "So you did manage to leave the station for a while," she said. "Let's have a cocktail. It's not often we have the chance to celebrate a 150th birthday."

Sitting quietly on the lounge near them, looking out toward the street where trains roared and sleek modern cars hummed, was a dark-skinned, cultured looking gentleman. He was Ceylon's representative at Sydney's 150th anniversary celebrations. He was perhaps, wondering whether he would return the compliment of his invitation by asking a Sydney representative to attend the approaching 2,500th anniversary of Ceylon. Tho contrast made the nature of Sydney's celebrations clearer—it is a celebration of youth rather than of age. The fairy story begins not with "a long, long time ago," but with "only 150 years ago this week, a motley collection of 1,482 people, some human beings, some inhuman beings, including men and women convicts with a few children, marines, with wives and children; officers, and sailors, became the founders of the youngest nation on the world's oldest continent."

History caught up with the present on Friday, January 21, when Camp Cove, just inside the Sydney Heads, was the scene of a ceremony to commemorate the landing of the first Europeans in Port Jackson. On that day, 150 years before, Captain Phillip, disappointed with Botany Bay as a site for settlement, had found "the finest harbour in the world, in which a thousand sail of the line may ride in perfect security." Unlike visitors to-day, Captain Phillip was not greeted with overwhelming cordiality. All the way from Botany Bay he and his men had heard the cries of "Warra Warra" ("Begone! Begone!"! from the natives.

But as the 1,300,000 successors of Captain Phillip's original 1,482, know he did not take the advice to "Warra Warra." On January 26 he landed his marines and convicts at Farm Cove, and Australia was founded.

Sydney spent thousands of pounds to re-create on Wednesday the scenes of that day. The scenes were well worth re-creating. Phillip, whose father was a native of Frankfort, who had come to London to teach languages, had a passion for orderliness and detail, but at the same time a strong romantic idealism. After the tribulations of his eight months' journey out with the dregs of humanity, in ships so overcrowded that at times he had to solve the problem of ventilation by exploding gunpowder between the decks, he was at last to have an opportunity to settle a new land.

A flagstaff was erected while startled kangaroos hopped among the trees. The British flag was run up and volleys were fired. Between the volleys Phillip and his officers drank the healths of the Royal Family and the new colony. The marines received a generous ration of two tots of grog, and the convicts — even including the 188 women among them — received one tot.  A tent made the first Government House. His Majesty's Commission, which had been formally read out, gave Phillip the powers of a despot, with obligations to raise public money, control garrisons and towns, put to death pirates and rebels, arrange for fairs and markets, and to look after lunatics.

On Wednesday the crowd heard the commission read out:— "We, reposing especial trust and confidence in the prudence, courage, and loyalty of you, the said Arthur, Phillip, of our especial grace, certain knowledge, and mear motion, have thought fit to constitute and appoint, and by these presents do constitute and appoint you the said Phillip to be our Captain General and Governor-in-Chief in and over our territory called New South Wales."

When it was first read the sound may have just drifted to the trees where the kookaburras were cocking inquisitive eyes and laughing immoderately. On Wednesday Wireless took it to the ears of thousands, and tall buildings and the mighty harbour bridge loomed over the expanse that Phillip saw as a forest. Whereas few cared that Phillip had left England and none knew how he had fared for a year or more, his memory was honoured in England on Wednesday by the placing of a wreath on his memorial tablet in St. Mildred's Church, Bread street, the parish in which he was born. Across the leagues of ocean that it took him more than eight months to travel came the voice of Australia's High Commissioner, spanning the distance in a twinkling, and reaching the ears of Australians almost 150 years to the minute from the time Phillip landed.

Contrasting oddly with the life-like replica of Phillip's ship in Farm Cove was the representative of the new era in transport, the Centaurus, swinging lazily at her moorings, a creation of man that Phillip in his wildest dreams would never have imagined. Elsewhere in the harbour lay warships of the United States, France, Italy, and Holland, strange interlopers in the recreated world of 1788.

For those who liked the tit-bits of history, there was also a neat contrast in the part played by the Governor, 150 years ago and now. His Excellency Lord Wakehurst, who has been playing an energetic part in the celebrations, may have thought of it when he was entertaining Premiers, Governors, or officers of the visiting ships, on the tasty viands that the young land provides. When Phillip was exploring the shores of the harbour 150 years ago he waded through swamps and lagoons, rode through the rain, slept on the damp ground, and often went hungry. On one occasion he was glad to have "a kettle of soup made from a white cockatoo and two crows."

However, it is the importance of foundation day 150 years ago, rather than the details, that Sydney remembers. The pageant of Australia's march to nationhood was the pageant of a city young enough to enjoy its age. The bright flags on the buildings, the long banners streaming from poles (which visitors from Melbourne, remembering their own celebrations, irreverently call "lolly sticks"), fluttered gaily over the urchin, the civic dignitary, the representatives of all parts of the Empire who have come to signify political strength, and the athletes who have come from all parts of the Empire to signify physical strength.

Although this week is anniversary week, the highlight of the celebrations, there is much still to come. The big game angling
championship of the world to being settled out at sea, and there
will be no gainsaying the results. - Anglers, knowing anglers, are taking no risks. The fish that got away will not matter, however long the fisherman's arms. They all have to face the cold facts of the weighing-in scales in the end. Riflemen are watching shining barrels and lovingly flicking away imaginary specks of dust, for they too have a championship approaching; women cricketers (something else that Phillip would not have imagined in, his wildest dreams) are practising their strokes and spins; many exhibitions of historical material will bring the concrete touch to the romantic past; the successors of the red coats will make young hearts beat faster as they display their prowess in public; the celebrations will spread far and near into the country; in fact, there will be few who will not have a chance of celebrating in their own special way the legacy of Captain Phillip.


******
AUSTRALIA - The term, recommended in his Voyage to Terra Australis in 1814 by Matthew Flinders, the skilful circumnavigator of the continent in 1801-03, and proposed by Macquarie to a reluctant British government in 1817, was taken up in Australia, especially by emancipists ....... Read more at http://www.australiaday.org.au/australia-day/history/beginnings/
By Kerryn Taylor - January 26, 2016