History Out Of A Cardboard Box by Allan Fleming

History Out Of A Cardboard Box

FRAGMENTS of Australia's war history have travelled to The Courier-Mail from Quilpie in a small cardboard box.   They are maps, stained with the mud of Flanders, that weary eyes peered at in the dim lights of dugouts while barrages thundered overhead; copies of operation orders, and a message from Sir John Monash that heralded Germany's Black Day in 1918; copies of a Digger newspaper that show the brighter side of war.
THE ''souvenirs' have been sent by Mr. Colin Butler, formerly Lieutenant Butler, M.C., B Coy., 41st Batt, A.I.F., to be handed on to the Oxley Library of War Relics. 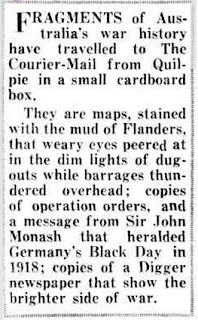 'I am only surrendering them in order that the memory of a battalion of which I am proud to have been a member may be preserved for all time in a national collection,' he writes.

The seven copies of the 'MacGillivray Magster' (price Id) which are included in Mr. Butler's collection were produced by a member of the 3rd reinforcements of the 41st Battalion on the way to England in 1916.

They reveal the best features of Digger journalism. They are bright, serious, cheeky, clever, humorous, and full of spirit. There was fun at the expense of everyone:

'When visiting Perth certain N.C.O.'s dined at the Savoy and went through the menu from soup to toothpicks. The waitress, so we are told, has been granted a week's leave to recuperate.'

'STOP PRESS NEWS . . . Great Boxing Match . . . Jimmie Square-Foot v. Billy Dolittle ... A Draw . . .
The scream of the trip up to now came off last night when two natives put on the gloves. They have as much idea of boxing as an iguana has of geology, but an immense amount of amusement was caused at the slangwanging each got. It ended in a draw, in fact, about 50 draws in the way of smokes'

The Muse thrived in spite of drill, discipline, and occasional complaints about the quality of cheese or the shortage of butter. Often the Muse wore a broad grin.
There were frequent verses on the more significant topics of the hour - on the attitude of the United States, on the vote for conscription, on thoughts of home and war, and on the progress of the armies.
There were editorials and paragraphs with seriousness and feeling.
The 'Magster' was printed with the aid of a duplicator on foolscap sheets. The names of contributors and 'people in the news' will bring back many rich memories to Diggers who will be able to look it over in the Oxley Library.

THE remaining souvenirs are from the battle zone. There is the map used by Lieutenant Butler in the big push between August 8 and 11, 1918. It is stained with the mud of Flanders. The positions of the 41st Battalion are marked near the Somme. Attached is an operation order, outlining the plans for the capture of the 'old Amiens system ' by advancing and 'mopping up' under cover of a barrage. The map is an eloquent relic of 'Germany's Black Day.' Most stained with brownish mud is the map carried by Lieutenant Butler in the Battle of Broodseinde. In a few places are little round lumps of French earth, sticking as hard as they stuck when the guns were thundering and the rifles rattling. A map from Berlin is Included in the collection. It was captured from a   German officer, and covers the battlefields from Ostend to Rheims. The name of its original owner is scrawled in pencil on its cover. From another captured German have come army letter cards that were destined never to be filled in; a pay slip; a postcard picture of a group of German soldiers grouped outside a dugout 'Kantine' with frothing steins in their hands. With them is the copy of the message from Sir John Monash, issued to No, 6 platoon on the eve of Germany's Black Day. It is addressed to soldiers of the Australian Army Corps. 'For the first time in the history of this corps all five Australian divisions will to-morrow engage in the largest and most important battle operation ever undertaken by the corps,' the message begins. It is in the pale purple type of a duplicating machine that has been working over time. 'They will be supported by exceptionally powerful artillery and by tanks and aeroplanes on a scale never previously attempted,' the message continues. 'The full resources of our sister Dominion, the Canadian Corps, will also operate to our right, while two British divisions will guard our left flank....

'Because of the completeness of our plans and dispositions, of the magnitude of the operations, of the number of troops employed, and of the depth to which we intend to overrun the enemy's positions, this battle will be one of the most memorable of the whole war; and there can be no doubt that, by capturing our objectives, we shall inflict blows upon the enemy which will make him stagger and will bring the end appreciably nearer....
'I earnestly wish every, soldier of the Corps the best of good fortune and a glorious and decisive victory, the story of which will re-echo throughout the world, and will live forever in the history of, our homeland.'

THREE months later victory had been won. The Armistice had been signed. Last of the souvenirs from the little cardboard box is the message from Birdwood, in the Field, November 14, 1918.   No words of mine can possibly express all I feel for the magnificent work which has been 'done by the Australian soldier during these four long years. It is well known and recognised not only throughout the British Empire, but throughout the world— and now we have peace in sight, and peace after a victory in which the Australian soldier has taken a large share. . . . 'Then will come the difficult time of demobilisation, and it is regarding this that I wish to make a personal appeal to every single member of the A.I.F. in the full confidence that it will be met as every other appeal to face and tackle the strongest positions has ever been met by the Australian soldier. Never has the name of Australia stood higher than it does now throughout the world, thanks to the bravery of her soldiers, and It is up to every one of us to see that this is maintained and that no reproach can be cast on the Australian flag owing to any behaviour of ours.... 'Play the game, boys, during this time, as you have always done, and add still more to the deep debt of gratitude which will always be acknowledged to you by the Empire and remembered by me as your comrade and commander.' Flanders, mud, jests before the battle, stirring words from men who marched in the vanguard of history, they are all in this small cardboard box.