Lilian Myrtle Fleming and Duncan McLaren were married on the 25 April 1928 at Whitfield, Victoria, Australia. 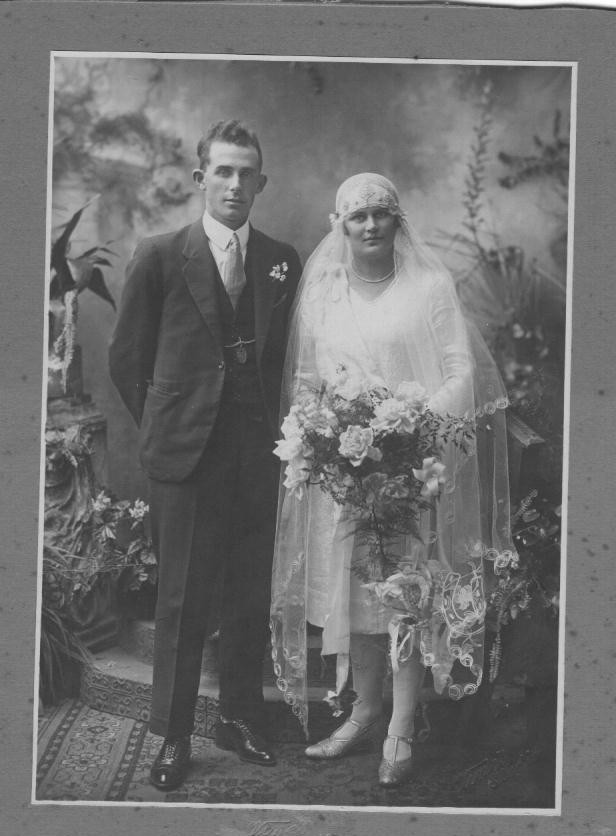 Lilian Myrtle Fleming, known as Myrtle or more commonly "Myrt" was the older sister of my maternal grandfather, Archie Fleming.  Myrt was born at Whitfield on the 5th of May, 1907.  She was the 8th child of  the 11 children of Donald Fleming and Margaret nee Hart.

Much interest was evidenced in a pretty wedding celebrated at the Whitfield Presbyterian Church on April 25th.  The contracting parties were Mr. Duncan Herbert McLaren eldest son of Mr. and Mrs. A McLaren ("Hillside" Whitfield) and Miss Lillian Myrtle Fleming (youngest daughter of Mrs.  D. Fleming ("Valley View" King Valley)  The Rev E. C. Day of Wangaratta officiated, assisted by Mr. Ian Munro, of Whitfield.  The bride (who entered the church on the arm of her Uncle Mr. J.K. Fleming) looked charming in a frock of silver lame, and finished with hand made roses of white georgette.  Her embroidered tulle veil fell in graceful folds from a coronet of pearls and back wreath of orange blossom, confining her veil cap fashion.  Her bouquet was of white dahlias and chrysanthemums intermingled with maiden hair and asparagus fern.  The bride was attended by her cousin (Miss Gladys Fleming) who wore a pretty frock of pink georgette and lace with felt hat to match and carried a bouquet of pink rosebuds, chrysanthemums and fern.  Mr. Arthur McLaren (brother of the bridegroom) was best man.  During the signing of the register,  Mrs.  Milbourne rendered the solo "God be with you" accompanied by the organist, Mrs. Lowry, who also rendered the wedding march as the happy couple proceeded down the aisle.  After the ceremony Mrs. Fleming entertained friends and relatives at the Whitfield Hall.  The tables were beautifully decorated with dahlias and chrysanthemums and the usual toasts were honoured.  The happy couple left by car for Wangaratta en route for Melbourne, where the honeymoon was spent.  The bride travelled in a frock of mushroom shaded wool crepe-de-chine and hat in blue and mushroom tonings.  She also wore a black fur coat, the gift of her mother.  The bride's gift to the bridegroom was a travelling rug and that of the bridegroom to the bride a wallet, and to the bridesmaids a xylonite clock.  The future home of Mr.  and Mrs. McLaren will be at "Greenfields" Whitfield.
By Kerryn Taylor - May 09, 2012