My grandfather's older brother William Robert "Bill" Musson was born on the 27th of November 1903 at Belfast, Canterbury, New Zealand.  His birth was registered early in 1904.

Bill enlisted in the New Zealand Military Forces on the 14th of February, 1940.  He gave his birthdate as 28th of November 1905.  Perhaps he thought 1903 was getting a bit close to the cut off age for enlistment, perhaps a recording error was made.  He gave his address as Rangiora, his occupation as a tractor driver and next of kin  E. M. Musson (his brother Eric Mark) 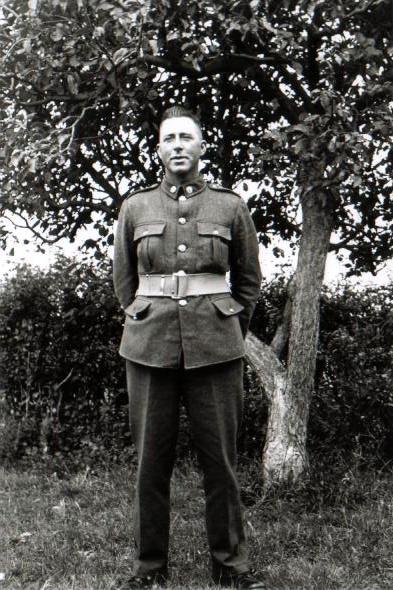 On the 29th of June 1940 after arriving in England Bill was transferred from E Company to H.Q. Company.

For a more detailed account of the Battalion's movements, I referred to Wikipedia:-

From Wikipedia - "By April 1940, training had been completed and 21st Battalion was preparing to depart overseas. It duly embarked aboard the Empress of Japan on 2 May 1940 and travelled in convoy with other troopships to Scotland[8] with its first port call at Perth.[9] The next stop would have been at Ceylon as the convoy travelled on towards its planned destination of the Middle East, but the invasion of Holland and France, followed by the entry of Italy into the war on the side of the Germans, forced a diversion. The convoy was now to make for England[10] and thus it stopped at Cape Town, and then Freetown,[11] arriving at Gourock, in Scotland, on 16 June."

Greece
The British Government anticipated an invasion of Greece by the Germans in 1941 and decided to send troops to support the Greeks, who were already engaged against the Italians in Albania. The 2nd New Zealand Division was one of a number of Allied units dispatched to Greece in early March.[13] By late March, 21st Battalion had arrived in Athens where it was to carry out guard duty of vital installations around the city while the rest of the division proceeded to the north of the country to garrison the Aliakmon line.[14] On 6 April, the day after Germany declared war on Greece, elements of the battalion guarding docks near Athens experienced a bombing raid which caused minor wounds to a couple of men.[15] On 8 April, the battalion began moving to the front to rejoin 5th Infantry Brigade, which was now stationed at Olympus Pass.[16] However, en route, the battalion was diverted to the Platamon Tunnel, which was 15 miles from the town of Larisa. The defences here had been prepared by D Company, of 26th Battalion.[17] Orders were to hold the position and should any part of it be lost, a counterattack was to be immediately made. The battalion, which arrived on 9 April, set to work further improving the defences, assisted for three days by the company from 26th Battalion until its departure.[18]
Casualties during the 21st Battalion's campaign in Greece amounted to 40 killed and wounded with 230 personnel captured and made prisoners of war.[19]
Crete
The Glengyle arrived at Crete on 25 April and 21st Battalion were unloaded at Suda Bay. Initially, it was believed that Crete was to simply be a staging point for the New Zealanders as they returned to Egypt. However, as military intelligence indicated a likely attack by the Germans, it was necessary to defend the island.[20] The 5th Brigade was assigned the defence of Maleme airfield, with 21st Battalion positioned to the east, guarding the beach and river mouth. It was also tasked with supporting 22nd Battalion if required. At this time, the battalion numbered 237 personnel, and two companies of New Zealand Engineers were attached to boost its numbers.[21] In early May several parties of men, including Macky, began arriving, having made their way to Crete from Greece by various means. However Macky was ill with dysentery and was soon taken to hospital, leaving Harding still as acting commander.[22]
On 20 May 1941, German paratroopers began landing on Crete. After the initial drop, during which several Germans were killed as they descended, the day passed relatively uneventfully for the battalion. Lieutenant Colonel John Allen had taken command just a few days previously.[23] After the Maleme airfield, defended by 22nd Battalion, was lost to the Germans, the entire 5th Brigade was withdrawn from its positions.[24]
It was evacuated from Crete on the night of 31 May aboard the light cruiser HMS Phoebe and reached Alexandria the following day. Total casualties during the Battle of Crete were 33 killed in action, 33 wounded, and 80 men were captured.[25]
North Africa
After a period of leave, the battalion's personnel reassembled at Helwan in Egypt. Reduced to about 270 men after the campaigns in Greece and Crete, it was brought back up to strength with over 500 reinforcements.[26] By August, the battalion, along with the rest of 5th Brigade, was involved in training in desert warfare and by the end of the month construction, of defensive positions, known as the Kaponga Box, commenced. It remained here for a month[27] before shifting further west to the Baggush Box.[28]
Its training was in preparation for the 2nd New Zealand Division's role in the upcoming Operation Crusader, which was planned to lift the siege of Tobruk.[29] The New Zealanders were to be one of the 8th Army's infantry divisions that were to surround and capture the main strong points along the front while the armoured divisions were to seek out and engage Generalleutnant (Lieutenant General) Erwin Rommel's Afrika Korps. At the same time, the Tobruk garrison was to attempt a breakout.[30]

Bill was recorded as safe in Crete May 1941, Egypt June 1941 and safe in December 1941 and September 1942 but no placenames were given for the last two dates.
Much of the record is written in military abbreviations that I can't understand.

Bill wasn't in all the battles written about as he had intermittent furloughs and hospital stays.
He was discharged in June 1944.

Bill married Veronica "Vicki" Whittle.  Vicki had a daughter from a previous marriage.  Bill and Vicki went on to have another daughter, Judy.

Bill passed away in November 1979 at Rotorua and Vicki in 1980.
Burial is at Block 16 section B plot 11, Kauae cemetery, Ngongotaha Road