Finley James Fleming was a first cousin of my maternal grandfather, Archibald William Finlay Fleming.  Finley was born on the 18th of June 1893 at Barwo (Kotupna/Nathalia) Victoria the second son and middle child of William James Fleming and Johanna Henrietta Christina Fisher. 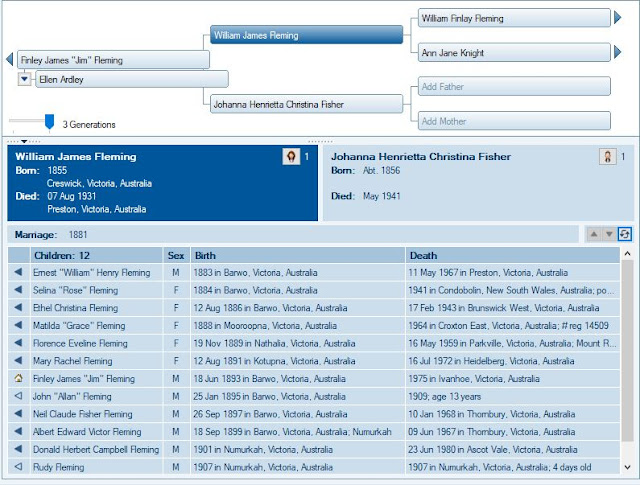 Finley enlisted as a driver to the 6 Field Ambulance on the 29th of December 1914.  He says on his attestation papers that he was born near the Town of Kotupna in the County of Nathalia, Victoria.
He was 21 years 6 months of age, 5 foot 7 inches tall, weighed 10 stone 5 pounds with a medium complexion, blue eyes and dark brown hair. Religion Church of England.

His occupation was a Driver, next of kin (father) William James Fleming of 28 McCracken Avenue, Northcote, Victoria.

On the 15th of September 1916, Finley was transferred to the 8th Machine Gun Company.

The 8th Machine Gun Company War diaries can be viewed at  https://www.awm.gov.au/collection/C1338669

In a letter to the Army Office dated 26th of June 1956 requesting information for Pension purposes, Finley states "while serving with the 8 Machine Gun Coy in France in 1917, I think it was at Messenies (sic) that I was blown up and buried to the waist in the trench, then evacuated to a hospital in France, then to England."
His records show that while in France he endured several hospital stays after contracting Influenza and later suffered myalgia, pleurisy and bouts of bronchitis which appears to be the reason for his return to Australia on the 30th of June, 1918.
He was discharged on the 15th of October, 1918.