My Mum's Grandad, Bill (William Thomas) MORGAN, passed away on the 19th of December 1950.
He was born in Euroa, Victoria in 1872.  The fourth son of Thomas Fitzherbert MORGAN and Mary Ann (Marian) nee PIKE. 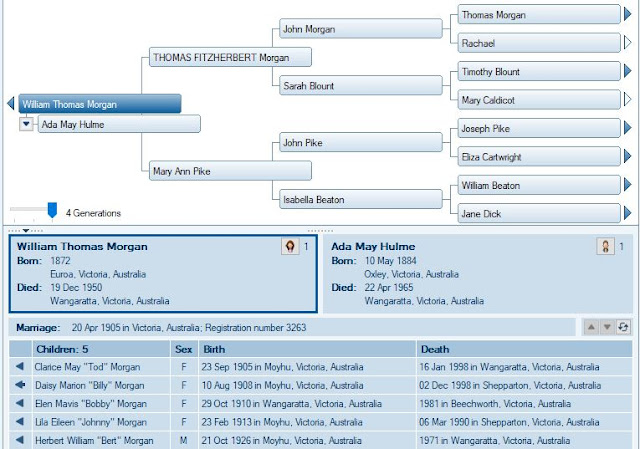 Aged 78, Mr William Thomas Morgan, Moyhu, died in the Wangaratta Base Hospital early on Tuesday morning.  He had been in failing health for the past few months, and a patient in Hospital for a week.
Born at Euroa, he came to the Moyhu district over 50 years ago.
He was first employed at Redcamp and was then share farming with Shanley Bros.  He retired from active life about eight years ago.
Mr. Morgan took no active part in public life, but was well liked by all.
He is survived by his wife, who was formerly Miss Ada Hulme, Milawa, and the following family: Herbert (Moyhu), Clarice (Mrs. Jones, Moyhu), Daisy (Mrs. A Fleming, Hansonville), Mavis (Mrs. L. Robinson, Myrtleford), and Lila (Mrs. H. Flanigan, Katamatite).
Brothers are George (Euroa), Robert (Edi Upper), Jack (Berrigan, NSW), and Edward (Seymour).
Funeral took place yesterday at the Milawa cemetery where the Reverend A.T. Stevens officiated at the graveside.
Handley's supervised arrangements.
Coffin bearers were Messrs H. Morgan, son, K Fleming, N Jones, grandsons, H Flanagan, son-in-law, Messrs H. Hulme, brother-in-law, P. Shanley, K. Lewis, F. Bowen, R. Jones, A. Gibson and W. Gibson.

Courtesy of my lovely and very helpful friend Jenny who was paying a visit to the State Library of Victoria and managed to get this obituary despite a "scuffle" with a rogue microfilm machine.
So glad you survived the flying film, Jen!