I only recently found the death and funeral notice of my great grandfather, John ADAMS who was born in North Melbourne on the 28th of February 1858 to parents George ADAMS and Catherine nee BARRY.

John married Mary Agnes MORGAN on the 7th of November 1887 at Essendon then they moved to Sydney where their first two sons were born.
Alexander born 13th October 1888 may have been stillborn or died soon after birth.
John "Jack" born (1889-1983) married May Maude McGee.

I do wonder who put the death notice in the newspaper as I have gleaned from family stories that John was estranged from his children.
Perhaps they reconciled in the years before his death.

John and Mary's battle over maintenance of their youngest two children played out in the newspapers.  It was rather confronting when I found the story.  I wrote about it in this Trove Tuesday Post back in 2012.

Those articles and family stories pointed to estrangement within the family but this death notice doesn't give that impression. 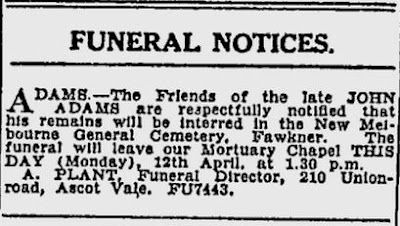