In the New Zealand Ballot list for 1940, Herbert's occupation was  listed as process engraving and he lived in Richardson Road, Mount Roskill. 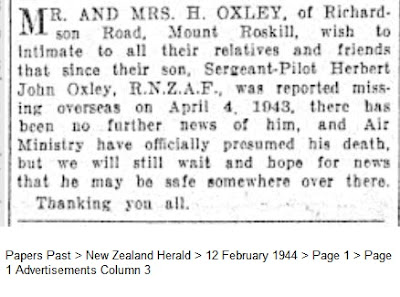 Today is the anniversary eve of the death of Herbert who was killed in action in Europe on air operations on the 4th of April 1943. His last rank was Sergeant in the Royal New Zealand Air Force, 485 (NZ) Squadron, RAF, service number 412725.

Along with other Mount Roskill residents who gave their lives, Herbert is commemorated on the town's War Memorial.

Herbert's grandmother was Emma MORGAN (1840-1903).
Maternal great-great-grand aunt of Shelley and myself and great-grand-aunt of Denise.

Shelley's sleuthing for this branch of our family paid off big time.
It is wonderful being part of such a team and to share the thrill of family history research with like-minded cousins.

Tribute page for our Servicemen
By Kerryn Taylor - April 03, 2016