In 1854, my great-great-great grandfather, William Cluff HULME, was in the sticky situation of Bankruptcy.

He was the eldest son of seven children of Daniel HULME and Mary nee WOOD.

Along with his sister Caroline, William was baptised on the 18th of April 1813 at St. Pancras Old Church. 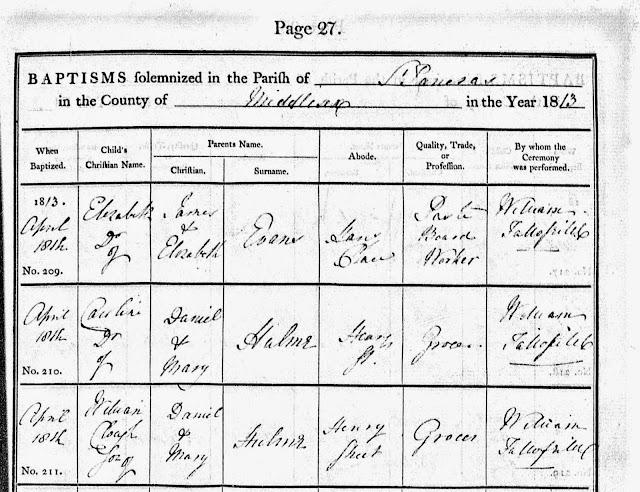 On the 4th of March 1841 William married Hephzibah LAND at Westminster, London. Between 1841 and 1859 they had eight children.

William was a grocer at High Street, Putney.
On the 10th of March, 1854 his bankruptcy was mentioned in the London Gazette. 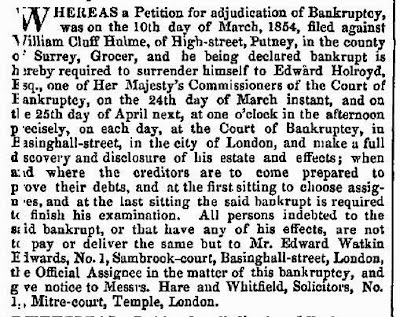 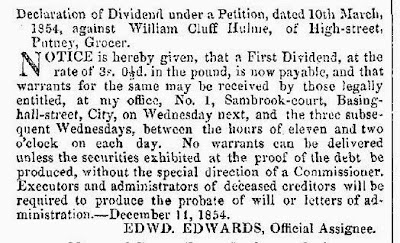 Bankruptcy procedure:
Chancery commissioners dealt with bankruptcy before 1832.
In 1832 the court of bankruptcy was established and creditors could petition the Lord Chancellor for a commission of bankruptcy or a fiat. Commissioners decided if a debtor was eligible to be declared bankrupt and would oversee the distribution of assets.
Official assignees were appointed and were responsible for depositing the proceeds from the sale of a bankrupt's estates into the Bank of England. When sufficient creditors were satisfied and had signed a request for a Certificate of Conformity (a statement that the bankrupt had satisfied all the legal requirements), the Commissioners could issue the certificate which effectively discharged him, although dividends might continue to be paid.
After 1849 creditors petitioned for an 'Adjudication in Bankruptcy.' The Commissioners took statements from the bankrupt and his creditors. The creditors would then elect trustees to value his assets and distribute them as dividends.
From 1849 to 1861, there were 3 classes of certificate of conformity which distinguished between


After 1861, orders of discharge were issued instead.

Possibly on the recommendation of other family members who had already emigrated, and to make a new start, William, Hephzibah, and six of their eight children, the eldest, William junior and the five youngest, Arthur, Jessie, Albert, John and Jeremiah, sailed for Australia on board the ship "Blue Jacket".

William and Hephzibah settled in North East Victoria where all but two of their children continued to live.
Hephzibah died in 1887 and William in 1895, both at Oxley.