My husband's great grandfather Bernard Riley, was a Catholic Irishman from County Down.

It isn't known when he arrived in Australia but there he met his love, Jane Russell, an Australian girl born to Irish Protestant parents Samuel Russell and Jane nee Moore.
Samuel and Jane, with their first three children, emigrated to Australia in 1838 on the ship Mandarin.

Samuel Russell, had a farm at Ceres in the Barrabool hills near Geelong.  It is not known how or exactly where Jane and Bernard Riley met, but it seems they eloped which no doubt would have caused quite a stir in her family.

Jane was only 16 years old when their first son John (Jack) Riley was born.  His birth doesn't seem to have been registered.

Their next three children, Margaret - 1860, William - 1862 (my husband's grandfather) and James - 1864 were all born at Warrnambool, Victoria and baptised there at the St. Joseph's Catholic Church.

There are no photos of Bernard and Jane but below is a photo of their eldest daughter Margaret.  I think Jane would have been a very beautiful young girl. 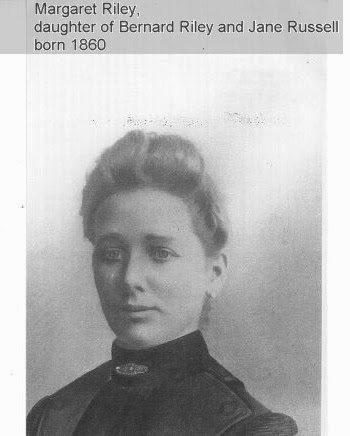 Jane died of heart disease during her last pregnancy in 1870.
Bernard Riley's deposition at coroner's inquest of  the death his wife.  16th day of April A.D. 1870
I am a labourer residing at Bullarook Forest.  I am the husband of the deceased.  I brought her yesterday afternoon into the Daylesford hospital.  I saw the resident surgeon, he said my wife was dying.  I brought her to the hospital as an oupatient and Dr. McGregor prescribed for her - I wanted my wife to come into the hospital three weeks ago but would not saying she would be rather at home.  signed Bernard Riley his mark.

The loss of his wife was more than Bernard could bear.  He died at the Ararat Asylum nine years later.

It was reported by a local farmer that he was going from fence to fence gathering wood and from his manner he judged him to be a lunatic.

Constable William Stoddart "went to the place and arrested him by the road side where he was sitting.  He was then quite silly and vacant? in his conversation.  He was then charged with vagrancy and remanded  ...? with a view to medical examination.  31st day of May 1879"

He died at the Ararat Asylum nine years later.
Bernard Reilly was admitted to the Ararat Lunatic Asylum on the 5th of July 1879, he was paralysed and very weak.  He took a bad change on the 29th and was ordered to bed where he gradually sank and died at 3.45pm on 2nd September, 1879.  I was present at death.  Signed Richard Hill, attendant at Asylum

Cause of Bernard's death was given as "Disease of the brain"