Helen, known as Margaret,  was born in 1909 at Brunswick, Victoria the youngest daughter of John Thomas McFadyen and his wife Katie (Catherine nee Adams).

Catherine/Katie nee Adams died in 1946 - she was a daughter of George Adams and Catherine Barry.

Again cousin Christine came up trumps in a search for Catherine/Katie's daughter, Mrs Margaret Skalberg.  She found the following document in the National Archives.  I requested permission from the NAA to use the image here.

All of the above information fits with what we have found in electoral rolls etc.
I didn't know that an Australian who married an "alien" resident had to also register as an alien.
Helen/Margaret's husband, John Skalberg, has been listed on the Russian Anzacs website and he served for Australia in both World Wars. 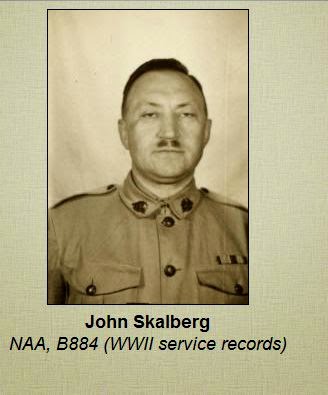 In 1954 an Ivan John Skalberg (son?) was living at 169 Brunswick road.  He was a commercial artist, but neither Helen nor John were listed there.  He was later living in Heidelberg.

Helen Skalberg died in 1976 at Parkville, Victoria.  Her husband, John Skalberg, died in 1974.  They are both buried at Fawkner Cemetery.